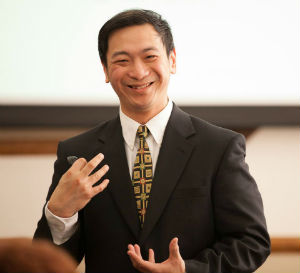 Mid-America Christian University (MACU) Physics Chairman Dr. Rahmat Rahmat was recently selected as the distinguished guest at the banquet for the Arkansas-Oklahoma-Kansas chapter of the American Association of Physics Teachers (AAPT) fall meeting. Established in 1930, the AAPT is an organization that is designed to unite physics teachers, expand valuable knowledge and overall improve physics education. Dr. Rahmat is most recognized for his work and contributions on the discovery of the God particle in 2012, hailed as the most powerful particle accelerator on the planet. The God particle was the last undiscovered subatomic particle and three years later, physicists are still hard at work on unraveling the workings of this phenomenal discovery. Dr. Rahmat’s dedication to the discovery of this led to his nomination for a Nobel Prize in 2013.

The world-class physicist has also been hard at work on developing a software known as HF G-Flash, which is a simulation of electromagnetic showers that is used to advance physics research. In addition to being the keynote speaker for the AAPT, Dr. Rahmat has also been invited to deliver speeches to high school physics teachers and students on three separate occasions throughout the month of October.

“I want to spread the news about the God particle,” exclaimed Dr. Rahmat. “I want to let people know that God loves us so much that he gave us this particle. It’s mechanism helps give weight/mass to everything that has mass, such as humans, trees, mountains, planets, galaxies and even MACU. Without this mass, we could not stand, sit or eat. The God particle discovery will be the foundation that will help physics students to do greater things for God and His kingdom.”

Growing up in a predominantly Muslim community in his home country of Indonesia, Dr. Rahmat has remained a faithful Christian physicist after accepting Jesus into his heart at a young age. Dr. Rahmat came to Mid-America Christian University as the head of the physics department in the fall of 2013 to help share with his students just how much God loves us. “I want to teach students to use physics to do greater things for God and his kingdom. MACU is the perfect place for me to share valuable physics knowledge with my brothers and sisters in Christ.”

Dr. Sharon Lease, vice president for academic affairs and dean of the College of Arts and Sciences at MACU says, “Dr. Rahmat has a passion for what he does in teaching and for his students which permeates everything he does. We consider ourselves blessed that he is a member of our faculty and I know our students are appreciative that they can learn from him.”

Accredited by the Higher Learning Commission (HLC), MACU is a private, , Christian liberal arts college of the Church of God (Anderson, IN) that’s experiencing unprecedented growth. MACU offers a range of programs, such as behavioral science, counseling, business administration, Bible & theology, teacher education, leadership, and criminal justice, all taught from a worldview that promotes Judeo-Christian values and ethics.