Pastor Aaron Holman of First Church of God in Thayer, Missouri, is starting a new workout regimen for both his body and his spirit. His workout routine involves lifting a barbell off the ground to the level of the hips, or “deadlifting,” 300 pounds in the gym located in the carport next to his home. In between sets of lifting, he exercises his mind and spirit by memorizing passages of the Bible. Four weeks ago, Pastor Holman finished memorizing Ephesians. Currently, he is midway through the book of Philippians.

“I had been working out since the start of the year,” says Pastor Aaron. “But I had this thought one day: how many times of devotion have I missed? I am dedicated to this physical fitness thing, but do I have the same mentality for my spiritual health? That was a convicting thought.”

Initially, Pastor Aaron’s Scripture memorization efforts were separate from his physical fitness workouts. However, he soon realized that the two exercises were similar, in that they both required dedicated work over a lengthy period of time. Inspired by the idea of improving his spiritual and physical health at the same time, he began interweaving the two practices. 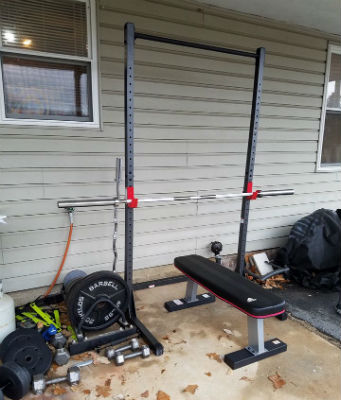 Aaron says his wife has “resigned herself to the growing gym in our carport.”

Although both workouts require a great deal of time and effort, they have proven successful long term.

“A lot of people give up when they see somebody deadlift 300 pounds and have books of the Bible memorized,” says Pastor Aaron. “They think, ‘I could never do that.’ They don’t see the small steps that lead up to that result.”

Pastor Aaron focuses his memorization efforts on just three verses a day. His practice involves repeating the passage a dozen times out loud in the morning when he wakes, midday in between workout sets, when driving, and immediately before bed. As a father of two young children ages one and five, finding time to memorize the Bible can be challenging. Utilizing moments of the day that are typically quiet otherwise still allows him sufficient time to serve his church and his family. 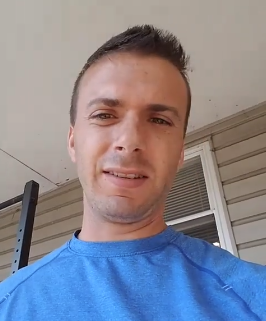 “If you set one sentence a day as a pattern for your life, you’ll work through a large amount of the New Testament within ten to twenty years,” he says. “Set goals, use spiritual discipline, set a routine. I’ll be the first to confess that this has been lacking in my life, but I can’t stress enough how different it has been for me now. It’s brought excitement back for me. The repetition is so rewarding.”

Although the idea of memorizing the Bible can be intimidating, Pastor Aaron believes that everyone has the capability to do so.

“Everybody gets intimidated, because in our culture, we’ve outsourced our memory to our phones,” he says. “I tell people, ‘If I don’t enter it into my phone, I won’t remember it.’ But how many songs do we know every word to? We don’t think about it that way, but it’s the equivalent of memorizing a chapter. You can do it, it just takes time.”

The spiritual and physical fitness routine has not only improved his confidence to handle the Word of God as a senior pastor, but also helped ease his stress.

“Exercise is a great stress reliever,” says Pastor Aaron. “Being a pastor often involves difficult decisions and high levels of stress. When I’m lifting, there’s none of that—just a heavy weight that I need to pick up then put back down. I don’t watch much TV; I find this much more relaxing.”

In Thayer, Missouri, across North America, and around the world, God is on the move in the Church of God. Join the movement. Reach our world. Donate today at give.jesusisthesubject.org.

*Video above only short portion of the live Facebook video where he recited all six books of Ephesians.