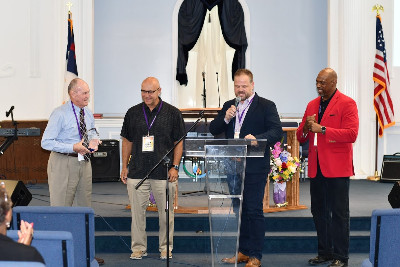 Alvin Young was a Baptist, but she was a part of the Church of God. Fueled by close proximity as neighbors in the North Carolina countryside near the town of Hickory, Alvin’s interest in her meant he would soon be attending the Church of God, too. The shift wasn’t hard for Alvin, though, for besides his love interest eclipsing denominational differences, he found the teachings of the Church of God to be more consistent with Scripture. Marriage soon secured their relationship with each other and the Church of God, but could do very little to secure their finances. While making a measly $1.15 an hour and doing his best to support a growing family, Alvin Young received a call to ministry.

Even as a child, Alvin Young barely scraped by. His father traveled by mule all over the state, working the lumber mills and doing his best to provide. When Alvin was only in eighth grade, he quit school to help his brothers and sisters around the house and on the farm. To some, Alvin’s ministerial calling may have been met with skepticism, but there was no doubt in his mind. Alvin’s lack of a diploma made his prospects grim, but God would make a way. Alvin started contacting ministerial colleges about possible enrollment, but doors of opportunity closed for the high school dropout. Then he contacted Gulf Coast Bible College in Houston, Texas.

The college, better known today as Mid-America Christian University, in Oklahoma City, Oklahoma, gave Alvin an intriguing proposal: take the necessary tests, score a passing grade to get your GED, and you’ll be accepted. Alvin passed, and he went on to graduate near the top of his class. All this could not come to pass, however, without first uprooting his family, moving several states away, and working three part-time jobs (in addition to his wife’s work) to pay for his ministerial training. Memories of the experience are a bit fuzzy today for Gary, Alvin’s son, but he remembers several of the key details. 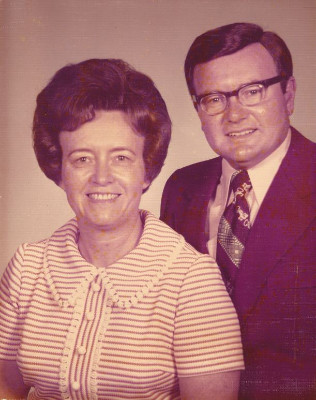 “It was 1958 and I was eight years old at the time,” Gary recalls. “We were very poor. We were living in a two-room house when Dad decided to become a minister. We had no indoor plumbing of any kind up in the foothills of Hickory. Then he says, ‘God’s called me and we’re going to Houston!’ I didn’t understand what was going on. We packed our clothes, an ironing board, and a mixer, all in a ’41 Ford, and headed to Texas. No job was lined up, and what money he had was what my grandmother could afford to let him borrow to find a place to live. Dad put himself through three years at Gulf Coast by working three part-time jobs, and my mom worked, too.”

Before the decline of Alvin’s mother’s health necessitated a move back to North Carolina, he served as pastor in Alabama. It was during these early days that young Gary noted how compassionate of a minister his father had become. A couple that wasn’t even attending their church needed some help and contacted Alvin. “They lived in a two-room house where you could literally see daylight coming through the cracks in the wall. They owned a hog, which was their food for the entire next year, as they had no money to buy food. They really had no money to buy anything. Dad had prayer with them, as the gentlemen told my dad that their hog was sick and would probably die. They said, ‘Preacher, if he dies, we don’t know what we’re going to eat for the next year. But dad said, ‘We’re going to pray for the hog.’ And he did. He prayed for them and prayed that God would heal the hog because these people needed the food. A couple days later, he got word that the hog had recovered! That animal’s disease meant it should have been put down. But my dad was the type that nothing’s too big and nothing’s too little to go to God with. I’ve never forgotten that.”

In 1966, Alvin Young and his family returned to North Carolina, where he became only the second minister to shepherd the flock at College View Church of God in Raleigh. In just six years, the congregation could no longer fit in the small block building, which would only hold about forty people. Pastor Alvin rallied the church to expand, and because of his own Spirit-given gift of craftsmanship, he served as the project’s contractor himself!

“He could do carpentry, electrical, plumbing, and much more,” Gary reflects. “Obviously he wasn’t highly educated but, if it needed to be built, Dad could do it, and he was very good at it.”

Alvin Young poured heart, soul, and body into the church, serving until 1982. Sadly, pouring his body into the church ultimately caught up with him. While carrying shingles up a ladder to the roof of the church building, he ruptured three discs—but didn’t stop working on the expansion until it was complete. Numerous surgeries did little to ease the pain that ultimately forced Pastor Alvin to sit down toward the conclusion of his weekly sermons. 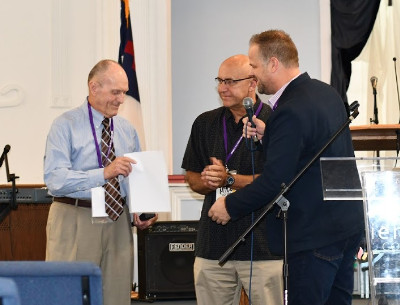 Gary Young receives an award and letter from Church of God Ministries and Carolina Ministries on October 6, 2019.

In 2001, Alvin Young passed away and, more recently, the church’s life cycle came to an end. But Pastor Alvin Young’s legacy lives, as does that of the congregation. The closing worship service was difficult, but several developments have encouraged the congregation. “Dad literally gave up his health, he gave his all, for the Lord and the church,” Gary explains. “But the property was purchased by another church, and that pleases us.”

The new church, though not affiliated directly with the Church of God movement, is Christ-centered, and God is already blessing. At one point earlier this year, the new congregation had already baptized sixty people.

Also, worth noting: Gary explains that the church property would have probably not even sold for a third of what it did without the expansion.

“So, what Dad built the building for is still being done,” Gary reflects. “They may repaint it or remodel it, but God is still working there and that’s what matters.”

The sale of the church building has also provided for the revitalization of other struggling Church of God congregations. Mike Claypool, regional pastor for Carolina Ministries, says, “College View’s legacy has enabled us to develop a system to help revitalize churches in North Carolina. We’ll provide consultation, coaching, and funds for this purpose.” Not only that, but Mike speaks of another benefit to the sale of the church, one which he describes as an “important way to honor Pastor Young’s legacy.”

That is, the opportunity for today’s ministerial students. Investing in the developing leaders of the Church of God, the remaining College View congregation decided to establish a scholarship with Leadership Focus to make it possible for the legacy of Alvin Young to live on with ripple effects into eternity. In the words of Alvin’s son Gary, “Let’s establish a scholarship fund so the next young minister doesn’t have to work three jobs to get through!”