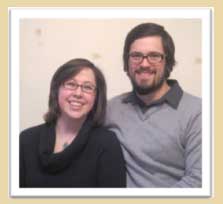 Zach and Audrey Langford, are newly appointed missionaries-elect to the United Kingdom. Zach became a Christian as a teenager and through the influence of youth leaders and pastors he developed meaningful relationships that fostered spiritual depth and growth. It was under the mentoring of Ken Oldham that Zach began to understand the global perspective of his faith. Through mission trips to Guyana and England, he was challenged to serve others and show Christ to the world.

Audrey is one of five children who had the privilege of spending five plus years in Cairo, Egypt. Growing up as a Third Culture Kid gave her a love for people, cultures and travel. While in school she developed a deeper faith through the ministry of University Christian Fellowship. She was involved in mission trips to Mexico, Belize and Northern Ireland.

Zach and Audrey met in high school and remained good friends through the years and in 2010 they married. After only 17 days of marriage they moved to England for 18 months. The Langfords served in a variety of roles; primarily ministering to the tough neighborhood kids of North England.

The Langfords will be catalytic partners with the Church of God in Birkenhead with particular emphasis on the youth program, research and creating new ministries to reach people. Zach and Audrey will work with the Three Worlds Team laying a foundation for a major church planting effort in Europe. Audrey will also develop a Three Worlds Member Care program for the Missionary Kids and Third Culture Kids that incorporates and mobilizes supporting churches. Global Missions believes the Langfords will be a great addition to the 3W team!