By chogministries
Posted October 2, 2017
In All Church of God, Northeast
WV Church Reclaims Hope Amid Opioid Crisis, Prostitution, and Poverty2017-10-022017-10-02https://www.jesusisthesubject.org/wp-content/uploads/2016/07/ChogLogo-Light.svgChurch of God Ministrieshttps://www.jesusisthesubject.org/wp-content/uploads/2016/07/ChogLogo-Light.svg200px200px 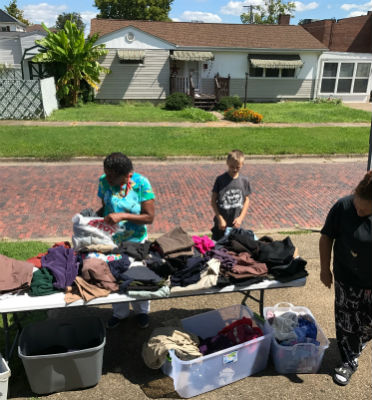 In small towns, big cities, and everything in between, drug abuse is out of control. Especially dangerous is the increasingly popular opioid. Not limited to its common appearance as heroin, addiction to pain killers is also growing concern, as are the deadly additives fentanyl and carfentanyl. Far more complex than a cause-and-effect scenario, a vicious cycle connects the opioid crisis, prostitution, and poverty. Madison Avenue Church of God in Huntington, West Virginia, has declared war on these three products of hell. In the heat of the battle, they’re seeing bonds broken, hope restored, a once-declining church grow again, and a city slowly being reclaimed for Christ. They’re taking back what hell has stolen.

Huntington, West Virginia, a city of roughly 48,000, is not alone in its fight against drugs. But its proximity to water and interstate transportation, its history of economic highs and lows, and its current lack of opportunity prove a dangerous cultural mix. Why have so many people turned to drugs in Huntington? Pastor Deb Rumer says it’s a complicated matter, but points to a general lack of hope. “And what we have is hope,” she explains. “We have a Savior who is the hope of the world. He is what we can bring to a population hurting, sick, and without hope.”

So, that’s what Madison Avenue Church of God has set out to do—bring hope to everyone they possibly can. Pastor Deb is leading the charge, and she’s as excited about the prospects as she was the day she accepted the senior pastor position a year-and-a-half ago. But change had to come within the church before life change could happen beyond the church. “When the pulpit committee called, I asked if they were interested in growing and changing,” Deb explains. “They admitted they understood that if they continued to do what they had been doing, they would continue to get what they had been getting—declining attendance, aging demographics and, in short, a dying church.” 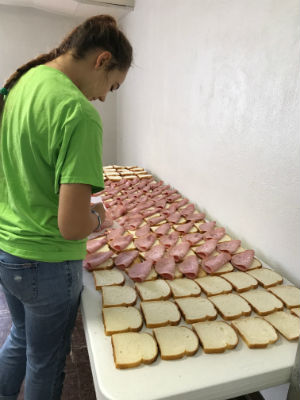 Making sandwiches for “Take it to the Streets”

Shortly thereafter, Deb Rumer attended a boot camp for pastors of churches seeking turnaround. She continues to work with the leaders of the boot camp as her coaches and mentors. But the church’s desperate push to disseminate the gospel isn’t so a dying institution can be saved. It’s all about a dying people for whom God’s desire is that none should perish. Pastor Deb truly believes God has led her to the Madison Avenue congregation for such a time as this.

After all, mailing invitations, placing ads in the newspaper, or even building bigger buildings don’t have the potency they once had. Under Pastor Deb’s leadership, Madison Avenue Church of God is going to the people now through regular neighborhood walks. Often church people are likely to be afraid to contaminate the sacred space of a church building such people as drug abusers and prostitutes. But Madison Avenue Church of God now welcomes the least of these into their sanctuary for addiction recovery programs. God is honoring their obedience. Six people have been baptized this year, a children’s ministry with zero children has blossomed to six, and Sunday attendance has doubled. And the work has only just begun.

Consider the Take it to the Streets initiative. On the second Saturday of each month, the church gathers for a day of feeding body and soul. The grocery shopping is completed in Friday so the church can make three hundred lunch meat sandwiches. Add a pack of crackers, cookies, and a bottle of water, and you have a free meal ready for distribution. Information about the church spreads through free wristbands, and six to eight recovering addicts from a sober living house walk the streets with the church volunteers. As a result, walls of suspicion are broken down by people who know the streets well. The local college ministry helps, too. The food addresses hunger, as some addicts will go a few days without eating in exchange for drugs, but also fosters conversation. Whenever possible, the conversation points to the true source of hope. For those who cannot walk the neighborhood, the church hosts a free clothing giveaway. There is a job to do for everyone! 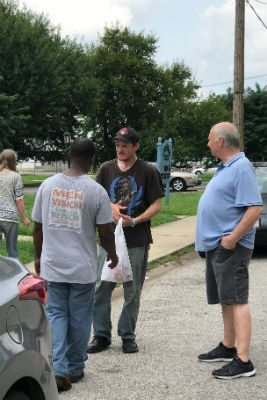 Taking it to the Streets – food for body and soul.

Having been trained by Kimberly Majeski and Stripped Love, Pastor Deb is also ready to engage prostitutes with the freedom available in Christ. Ruhamah (Hosea 2) is a ministry designed to offer the way to a new and better future for women caught up in a harmful lifestyle often embraced in response to poverty, often caused by widespread opioid abuse. Through their new ministry to women in crisis, the love of God in interpersonal relationship will serve as a healing balm for victims of the vicious cycle.

“When I started at Madison Avenue Church of God, every single person had a family member affected by the drug culture, death by overdose, still in active addiction, raising grandchildren because of addicted parents, etc.,” Deb explains. “Now I see hope on their faces—even if their particular situation has not changed. They feel like we are doing something! Jesus is being spoken in an area that is dark, the light is shining, and his love is being shared. I don’t know how not to be encouraged!”

Please pray for the Lord to meet the needs for the ongoing ministry of Madison Avenue Church of God. Thank you.

In Huntington, West Virginia, across North America, and around the world, God is on the move in the Church of God. Join the movement. Reach our world. Donate today at give.jesusisthesubject.org.