By chogministries
Posted March 13, 2020
In All Church of God, Central, CHOG
Wichita Church Baptizes 121 in Special Service2020-03-132020-03-12https://www.jesusisthesubject.org/wp-content/uploads/2016/07/ChogLogo-Light.svgChurch of God Ministrieshttps://www.jesusisthesubject.org/wp-content/uploads/2020/03/baptismnightjaeedit2020-36-scaled.jpg200px200px

Central Community Church in Wichita, Kansas, baptized 121 people in a special evening of worship on Sunday, March 8. More than 600 were in attendance. “The next morning, I came in the sanctuary, and I just sat there in awe of what God did,” said Bob Beckler, senior pastor of the church. “I was in awe, but I was not surprised.”

The previous Sunday, Beckler preached a special message in both morning services about the meaning and significance of baptism. At the end, he invited all those who felt called to be baptized to come forward. “My prayer to God was that, whatever you’re going to do, do it big,” Beckler said. “In that second service, when we gave the invitation, the people started coming from everywhere.”

For the worship and baptism service, the church set up two temporary tanks, in addition to its traditional baptismal font. “We had three tanks going at the same time,” Beckler said. “One after another, people—men, women, boys and girls, young and old—all confessing Jesus as Savior and Lord, following his command to identify with Jesus through baptism.”

A worship band led music through the entire hour-and-a-half service, and an LED screen above the stage kept tally of each baptism. Excited applause broke out after each person came out of the water. When Beckler looked up to find the final person in line had been baptized, the sanctuary erupted in cheers.

Lori Ehrlich was one of the people baptized in the service. “It’s a brand-new chapter in my life,” she wrote later on social media. “What a great worship service to celebrate our faith in Christ. I don’t think there was a dry eye anywhere. We left it all in the water!”

The service was live-streamed on the church’s Facebook page, and is still available to watch. 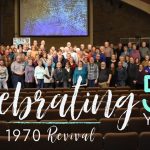 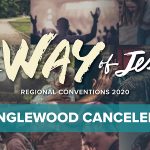