When Teachers Become Learners: Barefoot and Humbled in Bangladesh

By chogministries
Posted June 8, 2017
In All Church of God, CHOG TraffickLight, Global Strategy
When Teachers Become Learners: Barefoot and Humbled in Bangladesh2017-06-082017-06-08https://www.jesusisthesubject.org/wp-content/uploads/2016/07/ChogLogo-Light.svgChurch of God Ministrieshttps://www.jesusisthesubject.org/wp-content/uploads/2016/07/ChogLogo-Light.svg200px200px 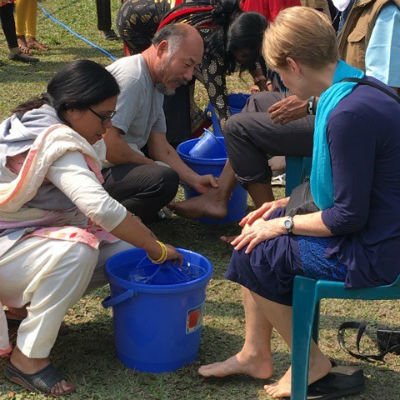 If you’ve ever been on a mission trip, you know it’s a mistake to think you’re going to another country only to teach and bless someone else. More often than not, you end up learning more than you could offer. Instead of leaving feeling impressed by all the good you did, you feel humbled by the good people you met. When a group from Church at the Crossing in Indianapolis, Indiana; First Church of God in Marion, South Dakota; and Church of God Ministries in Anderson, Indiana, came together for a missions trip to Bangladesh this year, the teachers once again became the learners.

They went to teach: Joe Cookston, CARE Initiative director with Church of God Ministries; Nikki Bauerle, associate pastor at First Church of God in Marion, South Dakota; and Shelly Clasen, missions ministry director of Church at the Crossing in Indianapolis, Indiana. Joining them were John and Carla Zerkle, also of Church at the Crossing, and Global Strategy regional coordinators Don and Caroline Armstrong. Their schedule was packed: the Barefoot Pastors’ Training, a youth convention, a women’s convention, and the national Church of God convention, all within hours of each other. Nikki, for one, explains that she preached what seemed like fifteen times in seven days. What they shared with the gathered believers in Bangladesh isn’t the story—holiness, unity, pastoral care, and so on. The real story is what these travelers from the United States saw and heard, and will never forget. 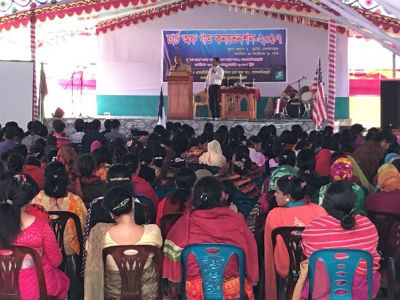 First, the commitment of the Bangladesh pastors and pastors-in-training. The Barefoot Pastors’ Training is so named for a reason. They come from miles and miles around the village to attend a conference, barefoot and, for most, on foot. Some arrive on rickshaws—a chiefly Asian take on the three-wheeled bicycle. Few, if any, arrive by car. Few would want to, considering the condition of the dirt roads. Despite the commute—up to six hours if coming from the Dhaka area—these pastors came and sat through preaching and teaching from morning until late in the evening. These pastors are a part of the minority religion, regularly face a variety of serious challenges to their ministry, and often dismiss their own comfort to share the hope of Christ. But they’re committed to spiritual growth, leadership development, and the body of Christ. 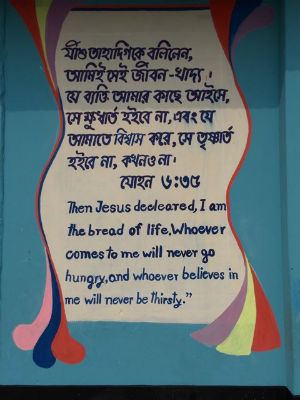 Second, the widespread poverty. There’s nothing like a good mission trip to a foreign country to confront us with our own consumerism. Generous and hospitable, the Church of God in Bangladesh treated their American guests like royalty. The Church of God made sure to care for their American guests, finding more comfortable, Western accommodations for them while they stayed. They cared for them as brothers and sisters in Christ. Preparing food on the floor, constantly sweeping dirt floors with grass brooms, and drinking unfiltered water is the norm, but all these and more are eclipsed by the focus on Jesus and the ministry to which he’s called them.

Third, the feeling that you’re being watched. Throughout the trip, local police officers were keeping watch over the American guests and the conference events. In this case, however, it was a good thing. The ministry of Tapan Borman, national leader for the Lalmonirhat Church of God group in Bangladesh, has resulted in so much good for the community that Tapan has developed a rapport with local leaders. The police officers were there to protect, though their presence also served as a reminder that at these conventions, they weren’t in Kansas anymore! At periodic moments throughout the day, each of the three local mosques would ring out with Islamic prayers resonating by intercoms. The voices of the imams could be heard even as the gathered pastors lifted up the name of Jesus in worship. And because baptisms often signal the conversion of a Muslim to Christianity, baptisms are often held at night. In the case of the baptisms at the convention, they were held behind a low wall to minimize attention and maximize safety for all in attendance.

“I left humbled,” Joe Cookston recalls, who originally wasn’t scheduled to go to Bangladesh, but filled a vacant spot that opened up within weeks of the trip. “I have such gratitude to have had the opportunity to go. There was such a deep commitment to God’s call on their lives. Their level of sacrifice is amazing.”

This was Shelly Clasen’s second visit to Bangladesh. “I learned a lot about what it means to be a follower of Jesus in a country where Christianity is very much in the minority,” she explains. “I learned what it means to be a good neighbor and how to represent Jesus in a place where that is a very unpopular thing. In a place where Christianity seems to almost be a non-factor in the culture, you can’t just take your faith and ministry for granted. You really have to go above and beyond to build bridges of friendship and show love in extraordinary ways in order to be representative of Jesus.”

This was also Nikki Bauerle’s second visit to Bangladesh. “I think the biggest thing for me was realizing how big God is,” she reflects. “We worship in different languages, not always with a translator, but we’re still able to be a part of the service. You don’t always understand what’s going on, but you can tell God is working across cultures and languages.”

The teachers from America were taught, blessed, and humbled. Barefoot, too. Think footwashing in Jesus’ day! 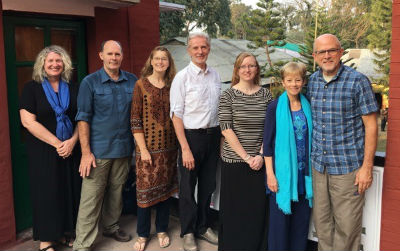 Learn more about Global Strategy and the work of the Church of God around the world at www.chogglobal.org.