When Jim Lyon Invites You on a Mission Trip

By chogministries
Posted August 27, 2018
In All Church of God, CHOG TraffickLight, Global Strategy, Southeast
When Jim Lyon Invites You on a Mission Trip2018-08-272018-08-27https://www.jesusisthesubject.org/wp-content/uploads/2016/07/ChogLogo-Light.svgChurch of God Ministrieshttps://www.jesusisthesubject.org/wp-content/uploads/2016/07/ChogLogo-Light.svg200px200px 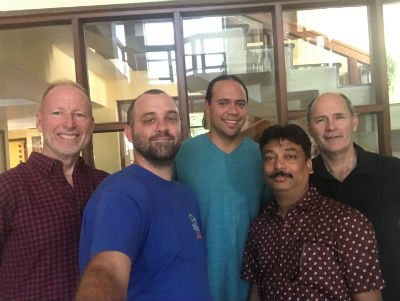 There are some opportunities you just don’t pass up. One of them is an international journey with Jim Lyon. Perhaps you’ve experienced the wonder of a CBH trip to Israel with Jim as your tour guide. You know there’s nothing like it. Maybe you’ve not been blessed to go yet, but you’re already considering January 2020. After all, it’s not hard to imagine the general director of Church of God Ministries, who the Movement has come to know as a master storyteller, describe in vivid and fascinating detail the people and places of the Bible. Though not everyone has the chance to travel one-on-one with Jim, the pastor of Crosspoint Church in Natchez, Mississippi, recently did. But as Marcus Archer saw the effect it would have on his life, church, and community, he was reminded it wasn’t so much Jim who made it all possible; this was the hand of Providence at work.

It’s been a year since Marcus Archer accepted the call to serve as lead pastor of Crosspoint Church. It was a few months before that when he and Jim first got acquainted. While serving on staff at Rustic Hills Community Church in Sioux Falls, South Dakota, Marcus was attending a pastor’s retreat for the North Central Region of the Church of God, and Jim Lyon was the guest speaker. Among the stories he told, he mentioned his tender heart for India. Marcus leaned in; he’d been to India three times and had fallen in love with the people and the culture. After the session, Marcus introduced himself to Jim and they chatted over their mutual connection to India. Jim said, “I’m actually going back there in November. You should come.”

It was at that point Marcus thought perhaps Jim was just being polite. So, when he had the chance to join Jim for dinner before he departed, Marcus asked, “Earlier you said I should come with you to India. Were you serious or what?” Marcus was astounded, because, as he puts it, Jim “didn’t know me from Adam!” But Jim was serious, and Marcus was in for a seriously life-changing experience. 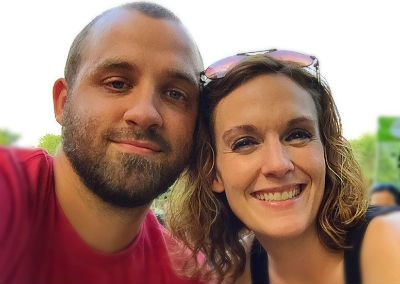 Marcus with his wife Mallory.

Southeast India was one of the first stops on their November 2017 excursion. Marcus was asked to address a crowd of persons newly called into ministry. About the opportunity, he reflected on the number of times Americans are asked to speak to our international brothers and sisters. Marcus remembers being humbled by the moment, believing that many of them really ought to be the ones coming to America to tell us about ministry.

Northeast India—Siliguri, West Bengal—was one of the next stops. This is where circumstances started to piece together in a way that couldn’t possibly happen apart from the Lord. There they met up with Global Strategy regional coordinator for the Asia-Pacific region, as well as TJ Samuelu, associate pastor of Cloverdale Church of God in Boise, Idaho. While meeting with the directors of the Children of Promise there—Sanjay Murmu and his family—they heard the story they will never forget.

You must understand that West Bengal has one of the highest rates of sex trafficking. Some of the poorest people in the world work there on tea plantations and are essentially tied to the land. When money is needed, children are often sold; some get caught up in sex trafficking. Thank God for the ministry of the Church of God on the ground, and the Children of Promise’s ministry of prevention.

Boys are considered most valuable in the society, though one six-year-old girl’s younger brother had been sold for only one hundred dollars. The mother, so distraught over the burden her daughter was going to be, had thrown her daughter on a busy street more than once. This girl survived, and one of Sanjay’s social workers encouraged the mother to release the girl into her care. The social worker put the girl in an orphanage, but due to lack of funding the orphanage closed. Now the girl lives with a local pastor and his wife. 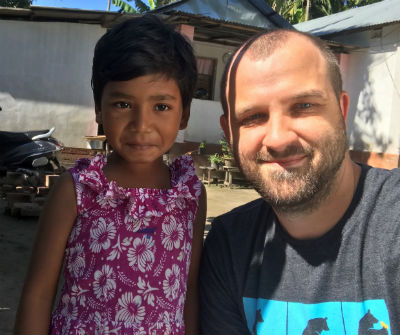 Marcus with his Children of Promise-sponsored child in India.

The day after the group heard the story, they found themselves meeting that pastor and the young girl from the story. Moved with compassion, Marcus turned on his cell phone and e-mailed Kirk Bookout from Children of Promise, insisting that if no one else had already sponsored Sarboni, he would eagerly do so. Marcus recounts that he had not yet informed his wife of the decision, and though they already had sponsored a child in the Philippines, he recognized the leading of the Holy Spirit in this divinely appointed moment.

More than ever before, Marcus understood the necessity of child sponsorship to prevent trafficking. By providing the support these children need, the burden is lessened on families that otherwise might be tempted to sell children into forced labor or worse.

India wasn’t the only component of their trip. Egypt was on the itinerary, too, and for different reasons. The country was celebrating the 500th anniversary of the Protestant Reformation. Meetings with Church of God pastors Ken and Keli Oldham, regional coordinator Patrick Nachtigall, and other local Church of God pastors were a tremendous blessing for everyone involved. Marcus looks forward to the opportunity to return.

“The best thing I’ve done is not say no when an opportunity presents itself,” Marcus reflects. “There’s this little girl who’s not sponsored, I’m moved, I will do something about it. Jim asks if I want to go to India with him, I go. Why would I say no? Do need the clouds to open up and the voice of James Earl Jones to tell me? No, I do not.”

The impact of this trip on Marcus continues to this day and extends to his local church and sphere of influence. He knows the impact he made was good, but God touched his heart, too. “I can’t change the world in two weeks, but I can encourage and lift up the people who will do the work long after I’m gone,” Marcus explains. “God’s love is selfless and goes to those that need him. While we were still far off, Christ died for us. We couldn’t come to him, so God came to us. He made us in his image, we rebelled, so he came to meet us where we are. Jesus was on a thirty-three-year mission trip! I want to be on mission, too.” 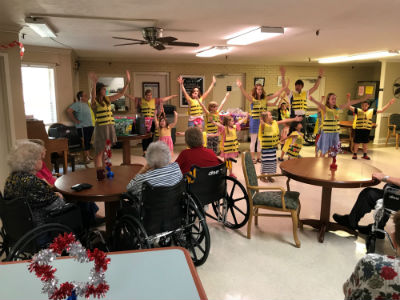 Crosspoint Church was more than gracious to let their brand-new pastor take three Sundays off within the first few months on the job. They’ve been gracious in a variety of ways, as they acknowledged their need for both change and leadership. Now the congregation is experiencing firsthand the benefit of a pastor who is engaged missionally both home and abroad. The congregation has now sponsored several of the other children from that same tea plantation in India. Their support for, and involvement in, the collective ministries of the Movement is on the rise. Their church has grown significantly, and their giving has dramatically increased. They’re striving to reach the relatively large local population of unchurched people totally unfamiliar with Jesus. The eye-opening impact of international travel directly affects their local passion for the lost.

“In the same way disciples multiply, rejection of Christ multiplies,” Pastor Marcus explains. “When I see a world where people are taken advantage of and children are sold and trafficked, I realize that somewhere down the line, someone said no to Jesus. Eventually you get a whole group of people that don’t know Jesus. Be it on a busy street in India or at a grocery store in Natchez, missions is not a thing I do when I go to another country. We must do missions all the time, everywhere. We must give people the chance to say yes to Jesus.”

Traveling with Jim, Marcus says he’s been able to see, as he puts it, “behind the curtain,” and he likes what he sees. So does the congregation he serves. One of his elders, in a church that has never before supported a Church of God Convention, is excited to travel to Safety Harbor, Florida, for the Regional Convention (September 25–26). “My experience growing up in the Church of God was great, but now the Movement’s got its move back!”

Inspired to travel with Church of God Ministries? Visit www.jesusisthesubject.org/travel-with-us to discover the possibilities.