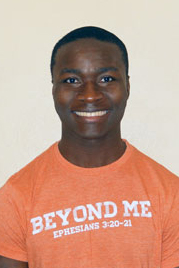 George was selected by the Student Life Department to receive this award because of his involvement in service activities. He will receive $750 and be able to designate a charity of his choice to receive an additional $250. George has chosen Mud Ministry, Inc., a non-profit organization in Florida that helps missionaries around the world and works with youths and camps.

George is a bible and religion and elementary education major from Ferndale, Wash. He was born in Haiti and at the age of 4 was rescued by a missionary, along with his youngest sister, CeCe, and placed into an orphanage for two years. The siblings were adopted by an American family when George was six years old. In 2012, George lead a mission trip back to his native country to reconnect with his biological family. Moved by the poverty and suffering he witnessed in Haiti, George was determined to make a difference. With a passion to serve others, he returned to the U.S. and initiated a beneficial hip hop project to raise support for Haiti.

During his freshmen year at AU, George formed Beyond Me (BME) Haiti, a collaboration effort of hip hop artists, singers and musicians using music to inspire and bring hope in people’s lives while raising funds for Haiti. He asked established Haitian charities to come alongside and use the funds they raised to help Haitian communities. George was also involved with Fellows, a leadership group on campus for freshmen, and Young Life at Westfield. He became involved with Grace in Action, a campus ministry at AU that helps at risk kids in the Anderson community. Upon graduation, George plans to teach in the U.S. and to be a missionary in Haiti by helping students see the difference they can make in the lives of others with their education.