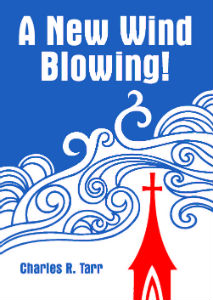 Warner Press has reissued A New Wind Blowing!, Charles R. Tarr’s personal account of the Anderson revival of 1970. Rev. Tarr was pastor of South Meridian Church in Anderson, Indiana, when the congregation heard a student group’s report of revival at Asbury College (now University) in Wilmore, Kentucky. Revival broke out in Anderson as well, prayer meetings were held at South Meridian for fifty consecutive days, and lay witness teams spread out across the nation.

In the following year, thousands of people were converted to Christ, delivered from substance addictions, reconciled to estranged families, and healed physically. The Jesus People Movement, an avant-garde expression of revival among American young adults, coalesced in 1970–71 as a result of the Asbury and Anderson revivals.

“The Anderson Revival was only one very small segment of a much larger and widespread movement of the Holy Spirit,” Pastor Tarr wrote. “Most of us would have said that what happened in Anderson was just an unusually good ‘revival’ had it been confined to this one city. But when one rises above one locale, and gets a wider perspective, he is suddenly aware that a new wind is blowing across America.”

Rev. Tarr is now retired and living in Washington state. However, pastors and laypersons continue to ask for copies of his revival account. The book retails for $9.99 and may be purchased in local bookstores or at the Warner Press website, www.warnerpress.org.