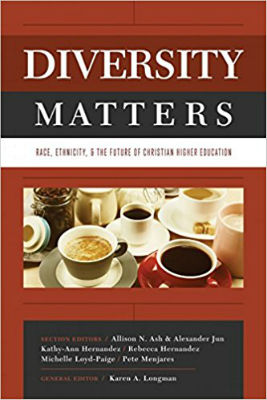 The book, Diversity Matters: Race, Ethnicity, and the Future of Christian Higher Education was published on August 8, 2017, and explores the unique need for diversity in Christian universities and colleges. The book begins with various universities and colleges that have made diversity a goal and priority. Among these is Warner Pacific College, the Church of God college in Portland, Oregon.

President Cook writes about her experience prior and during her time as president of Warner Pacific College. She saw a lack of effort in prioritizing diversity, so she committed to the challenge of shifting the paradigm. She stated,

“I shared with him [Jay Barber, former President of Warner Pacific College] that I felt we were misplacing our mission emphasis and that we needed to go all-in with our urban identity…God loves the city, and he loves the students we serve. This is his work. If we are available and willing to take the risks as he beckons, I believe the days ahead for Warner Pacific and for Christian colleges and universities across the world are very bright” (pp. 65, 76).

In her chapter, President Cook spoke of the details her journey, which consisted of reaching out to organizations in the community for support, to cutting language barriers between students and Warner Pacific. Her intention was to provide as much detail as possible to help other universities and colleges who are striving for diversity, as well. During her time at Warner Pacific, President Cook has managed to achieve an astonishing statistic: “…as of the fall of 2016, 57 percent of the students at Warner Pacific College are students of color. This is more than a 400-percent increase from when I arrived in 2005!” (p. 71). Since the writing of the book, diversity has continued to grow. As of the fall of 2017, 64 percent of the students attending Warner Pacific come from diverse racial and ethnic backgrounds.

The book is published by Abilene Christian University Press, a publishing company that focuses on twelve genres, one being Christian higher education. Diversity Matters is available online at Amazon, Barnes and Nobles, or Powell’s Bookstore.

The book features many contributors, with Karen A. Longman serving as the general editor. Dr. Longman is a professor and program director at Azusa Pacific University in Azusa, California. She teaches in the school of behavioral and applied sciences in the higher education department, where she also directs the Ph.D. higher education program. Longman, also an author and editor, has contributed to over twenty publications and edits the journal Christian Higher Education. She is also a senior fellow with the Council of Christian Colleges and Universities.

Warner Pacific College is a private, Christ-centered college of over 1,100 undergraduates and graduate students in Portland, Oregon. Warner Pacific was recognized as a top college and best academic value in the West according to the 2017 U.S. News and World Report. Established in 1937 by the Church of God (Anderson, Indiana), Warner Pacific offers 29 undergraduate majors and 4 graduate programs in business, education, ministry, and music at 5 campuses across the Portland metropolitan area and online. Warner Pacific provides all students with a welcoming and inclusive space to dream, achieve, and flourish. Learn more at www.warnerpacific.edu.