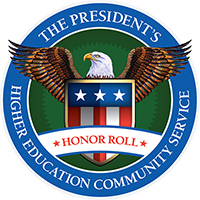 Warner Pacific College was named to the 2014 President’s Higher Education Community Service Honor Roll with Distinction by the Corporation for National & Community Service (CNCS). This is the highest honor a college can receive for its commitment to volunteerism, service-learning, and civic engagement.

Warner Pacific is the only school in the Portland area on the Honor Roll for which the “with Distinction” designation was bestowed*. Since 2008, the College has been recognized for its commitment to neighbors through inclusion in the Higher Education Community Service Honor Roll.

“‘Where faith and scholarship leads to service’ has long been the motto at Warner Pacific,” said Dr. Andrea Cook, President of the College. “We believe that loving, serving, and being with our neighbors here in Portland is a vital component of preparing our graduates to be active leaders and participants in an ever changing world.”

Warner Pacific students are encouraged to explore compassion by becoming involved in the lives of others. They build relationships, connecting with people from different circumstances which leads to a better understanding of the world around them.

It is the College’s desire to 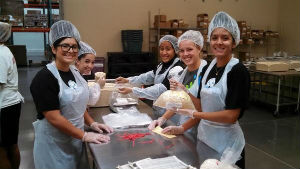 serve “neighbors” in a very real sense. An example of this local commitment is seen through the work of Warner Pacific students at elementary schools that fall within a square mile of the campus. Two years ago at Jim Bridger School, just blocks from the College’s campus, the student-led group Enactus began teaching after school classes and offering tutoring for students. Now, Warner Pacific students teach or assist in more than half the after school classes at Bridger, making a positive impact on that elementary school and its young students.

Other projects students are involved in during the academic year include:

• Common Day of Service (working alongside the community at 19 locations).

• Helping at food banks, community gardens, Embrace Oregon, and the College’s own Hot Chocolate Ministry for homeless in Portland during the winter months.

• Blood drives each semester for the Oregon Red Cross.

The President’s Higher Education Community Service Honor Roll recognizes higher education institutions that reflect the values of exemplary community service and achieve meaningful outcomes in their communities. The Honor Roll, launched in 2006, is part of the CNCS’s strategic commitment to engage millions of college students in service and celebrate the critical role of higher education in strengthening communities.

*The Honor Roll “With Distinction” recognition will be given to those applicants that display strong levels of institutional commitment, provide a compelling case for partnerships that produce measurable impact in the community, and have a Federal Work-Study community service percentage of 15 percent or above.

Warner Pacific College is a private, Christ-centered college of 1,400 undergraduates and graduate students in Portland, Ore. Warner Pacific was recognized as a top college and best academic value in the west according to the 2015 U.S. News and World Report. Established in 1937 by the Church of God (Anderson, Ind.), Warner Pacific offers 29 undergraduate majors and 5 graduate programs in business, education, ministry and music at 6 campuses across the Portland metropolitan area and online. Warner Pacific provides all students with a welcoming and inclusive space to dream, achieve, and flourish. Learn more at www.warnerpacific.edu.