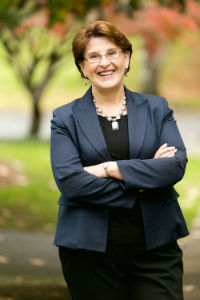 Warner Pacific College President Dr. Andrea Cook was recently named a 2015 Orchid Award Winner by the Portland Business Journal, which will honor her during their “Women of Influence” awards ceremony on Thursday, April 16.

The Orchid Award honors and recognizes the region’s most influential women professionals with strong records of innovation, outstanding performance in their respective fields, and meaningful contributions to their communities. Nominations for the award were judged on three criteria: professional accomplishments, community leadership, and awards and milestones.

“Equitable access to higher education is central to the mission of Warner Pacific College and its president, Dr. Andrea P. Cook,” comments Judith McGee, chair/CEO of McGee Wealth Management and a friend of the college. “Through specially tailored programs, first-generation students at Warner Pacific are achieving their higher education goals, paving the way to a brighter future. With love, respect, and accountability, Dr. Cook has nurtured a partnership with the Portland Leadership Foundation, creating the Act Six Leadership & Scholarship Initiative Urban Track, which provides full-need scholarships to under-represented, first-generation students in the Portland-metro area.”

Tom Mears, Chairman of The Holland, Inc., and member of the Social Entrepreneurship Advisory Board at Warner Pacific, adds: “Under Dr. Cook’s leadership, the college has embraced its identity as an urban campus dedicated to serving the City of Portland. Dr. Cook is actively involved developing partnerships and collaborative relationships in the Portland area. She serves on the boards of Oregon Campus Compact, the Oregon Alliance of Independent Colleges and Universities, the Council for Christian Colleges and Universities, and on the national leadership council for the Church of God, Warner Pacific’s partnering church denomination.”

In recent years, the college has embraced innovations to assist and encourage scholarship and leadership as well as adapt to changes in higher education including adding a social entrepreneurship major, developing First-Year Learning Communities, offering Portland’s first undergraduate loan repayment assistance program that enables students to flourish in the career of their choice after graduation, and embracing transfer students from the many local community colleges.

On September 20, 2009, President Cook, a native Oregonian, was inaugurated as Warner Pacific’s seventh—and first female—president. Dr. Cook is the recipient of the Oregon Latino Agenda for Action’s Ally for Excellence Award; the Adventist Health Foundation’s Heroes of the Heart award for service to the Portland Community; and the Northwest Nazarene University’s L.E. Wesche Outstanding Educator of the Year award.

Dr. Cook is joined by twenty-four other exemplary Portland women being honored as Portland Business Journal as Women of Influence.

Warner Pacific College is a private, Christ-centered college of over 1,400 undergraduates and graduate students in Portland, Ore. Warner Pacific was recognized as a top college and best academic value in the west according to the 2015 U.S. News and World Report. Established in 1937 by the Church of God (Anderson, Ind.), Warner Pacific offers 29 undergraduate majors and 5 graduate programs in business, education, ministry, and music at 6 campuses across the Portland metropolitan area and online. Warner Pacific provides all students with a welcoming and inclusive space to dream, achieve, and flourish. Learn more at www.warnerpacific.edu.