By chogministries
Posted May 20, 2015
In All Church of God, Northeast
Virginia Beach Church Celebrates Mortgage Burning2015-05-202015-05-20https://www.jesusisthesubject.org/wp-content/uploads/2016/07/ChogLogo-Light.svgChurch of God Ministrieshttps://www.jesusisthesubject.org/wp-content/uploads/2016/07/ChogLogo-Light.svg200px200px 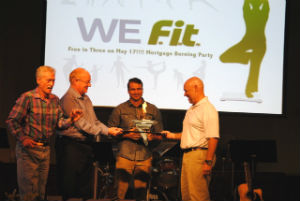 On Sunday, May 17, a huge burden was lifted off Water’s Edge Church of God in Virginia Beach, Virginia. Witnessed by the gathered saints, Pastor Steve Roby, and two previous pastors, financial prison doors were opened to a future of flexible ministry freedom. Accompanied by shouts of praise and thunderous applause, the church’s mortgage went up in flames—literally. It was a trajectory-altering moment in the church’s history that deserved nothing less than a pull-out-all-the-stops celebration. The entire congregation celebrated with worship, ceremony, and a barbecue feast that followed. Though they ate well that afternoon, reaching such a noteworthy milestone was no piece of cake. 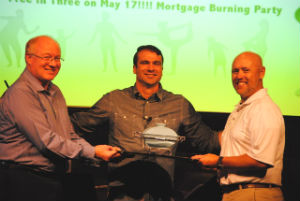 Three years ago, under the leadership of then-Pastor Larry Messick, the church decided to make every effort to pay off their mortgage as quickly as possible. Economic uncertainty and a desire for good stewardship motivated Water’s Edge to strive for this goal in just three years. They promoted the F.I.T. campaign, which stood for “Free in Three” years. But a pastoral transition added strain to the church in the midst of their quest for financial freedom, as did a drop in regular giving. Additional pressures were credited to the transient nature of the community of Virginia Beach. Amazingly, several individuals who moved away during the campaign kept their commitments and continued to give until the mortgage was paid off. 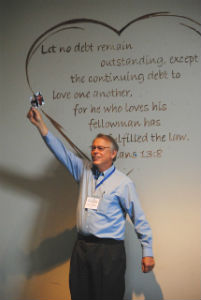 Romans 13:8 exhorts believers to “Let no debt remain outstanding, except the continuing debt to love one another, for whoever loves others has fulfilled the law” (NIV). This verse played a major role in inspiring Water’s Edge to keep pushing toward the goal of paying off their mortgage early. “The current worship center was built in 2001, and the campaign that enabled the church to build had long expired,” Steve Roby explains. “The challenge was laid before the congregation by the elders at the time to make financial pledges over and above their regular tithe. At that time, the mortgage balance stood at approximately $273,000. Some chose to pledge additional monthly giving, while others chose to do it as a one-time gift in the form of a lump sum.”

In spite of some challenges and setbacks, Pastor Steve’s arrival brought with it new commitment and recommitment to reach the goal. “My family and I arrived in Virginia Beach late in January of 2014, just three months after conversations began,” Steve explains. “In that time, we’ve seen a new wave of momentum at the Water’s Edge, and we are incredibly excited about the future of the church, as financial giving and weekly attendance has continued to rise. We actually brought in $100,000 more than was budgeted last year!”

Freedom from the mortgage was more than enough reason to celebrate God’s goodness in the life of the Virginia Beach congregation. Each month, the church had been paying at least $5,500 to the building debt. Now that burden is gone. “In that sense, the ministry was always handcuffed to a certain degree,” Steve explains. “Paying off the mortgage represents a release from financial bondage, a true freedom and flexibility to use our resources in carrying out our vision of being a church that is most passionate about what is most important.”

In a play on words—for those familiar with the Nintendo-brand gaming system—the church’s May 17 “We F.I.T.” celebration service didn’t promote physical health, but instead, spiritual and financial health. And though it didn’t burn calories as well as Wii Fit, it did burn some mortgage papers. Former pastors Larry Messick and Terry Rolen were present to help light up those papers. “This is a win for us,” Steve concludes. “It’s a mark of achievement. Our people will remember this day. Our children will remember it. We could have spread the payments out over a few more years, but with that comes a lot of dollars wasted on interest. The people here have a heart for the gospel, and we want to see it advance in Virginia Beach, Hampton Roads, and in all the world. The church is not a building, but we have to gather somewhere. This place, 4141 Holland Road in Virginia Beach, is a place where people gather under the headship of Jesus. He is the subject. After all, ‘Jesus began to teach…while all the people were [gathered] along the shore at the water’s edge.’ (Mark 4:1 NIV).”