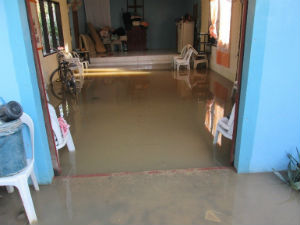 Residents of flooded farming villages in the Philippines were trapped on their rooftops on Monday, and animals floated down fast-rising rivers, as a result of the devastation caused by Typhoon Lando (international name: Koppu).

Head-level floods had also forced people to evacuate from their homes and put up tents along the roads to serve as temporary shelters because there were no designated evacuation centers. The churches which supposedly serve as the evacuation centers, for our members and beneficiaries of the program, were also submerged to neck-high floodwaters. One day following the typhoon, Rev. Eduardo Viray, the national leader of the Church of God in the Philippines, together with the staff of Grace Family Helper Project, visited the areas and witnessed the churches and houses in Calaba and San Antonio still in knee-high flood waters. “The waters arrived suddenly. We did not expect it at all,” the pastor in those areas said. 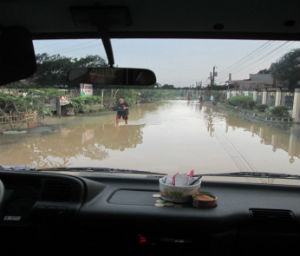 After making landfall on Sunday morning on the east coast of Luzon, the Philippines’ biggest island, the slow-moving typhoon brought heavy rain to some of the nation’s most important farming areas. “I’ve never seen anything like this. It’s the worst flood I’ve seen in my entire life,” a farmer, who is one of our beneficiaries in the sponsorship program, commented as he walked through knee-deep water inside the church in Calaba, Nueva Ecija. The storm was also forecast to continue dumping heavy rains across the Philippines until Wednesday.

Additionally, farmers have been hit hard by the drowning of several water buffalo. In the Philippines, water buffalo are the primary means of plowing rice fields. This is another area where prayer is desperately needed.

In Calaba, and San Antonio (Nueva Ecija), pigs, goats, dogs, chicken, household materials and personal belongings were scattered along the areas, where about four hundred residents had been seeking refuge from the floods since Sunday night. Wide expanses of rice paddies had disappeared under torrents of water throughout the towns and villages because of runoff from torrential rain unleashed by Koppu on nearby mountain ranges.

Koppu initially hit fishing and farming communities on the east coast of Luzon with winds of 210 kilometers an hour, making it the Philippines’ second most powerful storm of the year. The Philippines are hit with about twenty major storms a year, many of them deadly. Unfortunately, most of our members and program beneficiaries are always victims of such catastrophe. The houses that were damaged before are again submerged in floodwaters. That’s why the families built tents where they can settle for several days while they are waiting for the flooding to subside.

We have brought goods and medicines that can help relieve their distress that the typhoon brought them for several days now. We appeal for your prayers and support for our needy brothers and sisters. We are planning to go back to the affected areas this weekend or next week to follow up on their condition. God bless everyone for being part of the ministry for the needy and suffering.

The best way you can help is by supporting our Disaster Relief fund. Please consider donating today. You can also send your donation to Attn: Disaster Relief, Church of God Ministries, PO Box 2420, Anderson, IN 46018. Be certain to clearly designate your gift to Project #45.04502.

For questions regarding this and other disaster relief efforts in the United States and internationally, contact Stephen Lewis at 800-848-2464.