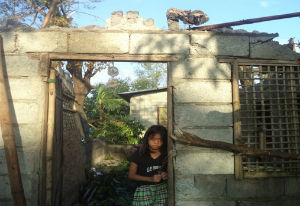 The death toll from Typhoon Haiyan is staggering. The number of families displaced is overwhelming. Church of God Disaster Relief is partnering with World Relief and the Wesleyan Church for an immediate response, including distribution of food and water, and possible staging of work camps.

We are in contact with Eddie Viray and other Church of God national leaders in the Philippines who are continuing to meet the needs of thousands already devastated by the October 11 typhoon. Children of Promise also continues to monitor the needs of sponsored children in the area. The extent of the damage is still uncertain, but catastrophic loss is expected. Power in the area is not likely to be restored for weeks, and the needs are great. Your gift to Disaster Relief will help our brothers and sisters to rebuild their lives.

Typhoon Haiyan, said to be one of the strongest storms ever measured on earth, packing wind gusts of 235 miles per hour and stretching across 1,150 miles at one point. The typhoon has compounded existing problems in the Philippines, including a deadly earthquake on October 15 and numerous typhoons earlier this year.

You can help. Donate today to Church of God Disaster Relief.

“During this time some prophets traveled from Jerusalem to Antioch. One of them named Agabus stood up in one of the meetings and predicted by the Spirit that a great famine was coming upon the entire Roman world. (This was fulfilled during the reign of Claudius.) So the believers in Antioch decided to send relief to the brothers and sisters in Judea, everyone giving as much as they could.”—Acts 11:27–29 NLT.