John 9 captures a moment in the ministry of Jesus that once read is not soon forgotten. It helps us all wrestle with questions for which there are no easy answers; it frames tough circumstances with hope of greater purpose. John 9 describes an intersection between Jesus, His disciples, a man born blind and, eventually, His critics.

“As Jesus was walking along, He saw a man who had been blind from birth. ‘Rabbi,’ His disciples asked Him, ‘why was this man born blind? Was it because of his own sins or his parents’ sins?’

“It was not because of his sins or his parents’ sins,’ Jesus answered. ‘This happened so the power of God could be seen in him’” (John 9:1–3).

Nick Vujicic was born in Melbourne, Australia, in December 1982, without arms or legs—without limbs of any kind. No prenatal hint of the physical disability was given, no clue as to its cause has been ever definitively established. Medically described as phocomelia (an extremely rare disorder literally meaning “having no arms or legs”), the best that can be said is that it was a birth defect, dramatic and unforeseen. His parents, the attending physician and hospital staff, all present, were shocked and dismayed, as the infant Nick emerged, sans limbs.

Nick’s parents were of Serbian descent, grounded by their Christian faith, no strangers to hardship. Both of Nick’s grandfathers had been imprisoned by Communist regimes for preaching the gospel. Nick’s parents came to believe that his physical challenges would prove to give life, although they were uncertain how God would unfold His plan to do so. The magnitude of his disability, at first, overwhelmed them. Nick was raised in a home that trusted God in all things, but, nevertheless (and understandably), succumbed to profound self-doubt and despair as he grew older. Facing the ordinary challenges of adolescence, magnified by the extraordinary challenges of phocomelia, he grew desperate. Imagine yourself at school, watching others pursue sports and romance, enduring merciless bullying, finding yourself dependent on others for simple things everyone else takes for granted, all as a teenaged boy inhabiting a body limited to a head and torso.

Nick wanted to die. He was angry, despondent, hopeless. He tried to drown himself while in a bathtub. But, the still small voice of God, the sudden comprehension of the grief his loving parents would know in his passing, the realization that whatever was wrong could not thus be made right, pulled Nick back from the brink. He chose to live.

And, he found a Bible and fell into John 9. “I knew I had to make my life right with Him, but I blamed Him for my pain.” Nick Vujicic drank from the Word and was transformed by the words of Jesus. For so long blaming God for his condition, Nick’s life turned on the truth, “This happened so the power of God could be seen in him.” He gave his life to Jesus, was born again of the Spirit, and discovered reason for being.

By the time he was nineteen, Nick was on stage, sharing his story. He would finish high school and earn degrees in accounting and financial planning from university. But the response of every audience to his testimony, the obvious gifting of articulate communication, the irresistible smile, and the wicked—no, better said, righteous—sense of humor that inescapably surfaces every time he speaks, inevitably drove Nick into the ministry.

He’s thirty-four now; he’s married and is the proud father of two sons. He has visited sixty-five countries; he has spoken live to over 400,000,000 people. He is the author of several books, including a New York Times bestseller (Unstoppable). He has been a guest on Oprah, spoken at the World Economic Forum in Davos (Switzerland), and been featured in everything from USA Today to Christianity Today. He has found huge and receptive audiences in public schools; he has been welcomed to the platform of the Ukrainian parliament and preached in China. But, wherever and whenever he is given the mic, Nick Vujicic is all about Jesus.

He has a passion to share the gospel. He is a motivational speaker, no doubt about it. His book on bullying (a compelling read for kids and adults) titled Stand Strong is especially relevant in this turbulent age of social media intimidation in which we now live. But, at the end of every day, Nick is an evangelist. With a boldness that should make all of us able-bodied blush, he is not ashamed of the gospel and calls the best out of all who will listen, drawing them to Christ.

I first met him a few years ago, backstage, when he spoke to a standing-room-only crowd of high school students in Indiana. I wasn’t sure how to greet him, as I walked into the door of the “green room,” in which he had just spent two hours greeting a line-up of physically-challenged students that reached around the block. I stood to the side watching each one, tentative at first, then bright and laughing, with eyes dancing: young men and women in wheelchairs, families and caregivers, all given hope in Jesus by Nick’s witness. At last, when all were gone, I was invited to step forward, as a community leader he hoped to meet. I stood in front of him, tentative, like all the rest. Conditioned to shake hands when meeting another man, I fidgeted; Nick does not have a hand to shake. He looked up at me, grinning from ear-to-ear, “Jim Lyon? Is that you?” I nodded. “Come over here and give me a hug.”

I walked over and awkwardly, at first, gave him a hug. In a moment, all of the “what-do-I-do-now” tension melted, and it was as if we were old friends. In many conversations since then, I have come to know and deeply love this man of God. His passion for the lost, his unshakeable faith in the love and purposes of the Most High, and his unmistakable Spirit of Jesus, make you forget, in time, what most first notice: he has no arms or legs. No matter. He has a heart and mind without peer.

Nick literally receives thousands of invitations to speak, worldwide, every month. It is no small assignment just sorting through the mail (electronic and otherwise). When we first invited him to join us at the ChoG Convention in Wichita next month, I was skeptical that he would be able to accept. There are so many others knocking on his door, so many larger auditoriums and, by the measure of this world, more prestigious or influential asks. But, after thinking and praying for a few weeks about our invitation, Nick called me.

“Be Bold? Reclaim? These are the themes?” he asked. “Yep, these are our emphases; we’re daring the church to step up, to step out, to be bold, to take back what hell has stolen,” I explained in reply.

“That’s right up my alley,” I could literally feel his grin on the phone. “I know the Lord wants me to be there, to share there, to learn there. I want to work with the Church of God, to dive in. I’m all in.”

We hope you will be, too. Once you see and hear Nick Vujicic, you will see and hear Jesus. Seriously. The Lord’s hand is on him. His boldness will stretch, inspire, and dare you. Nick speaks on Wednesday evening, June 21, 2017, at the ChoG Convention in Wichita. It will be unforgettable. You can be there. Or hear about it. Why not be there?

Nick’s sharing is just one piece of the whole, amazing fabric of this convention. Join us. Join the Movement. Be bold. Take back what hell has stolen. You can. We will. See you there. 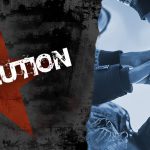