By chogministries
Posted September 30, 2020
In All Church of God, Change the Story, CHOG
Two Pastors, One Goal: Understanding2020-09-302020-09-30https://www.jesusisthesubject.org/wp-content/uploads/2016/07/ChogLogo-Light.svgChurch of God Ministrieshttps://www.jesusisthesubject.org/wp-content/uploads/2020/09/cornelius_atkinson_hallie_scott_collage.jpg200px200px

Two pastors—one Black, the other white. Both serve their respective communities, one urban and the other in the suburbs. The two pastors have been friends for many years, serving together on church development teams and state ministry. They believe their bond is strong. While one likes fishing, the other prefers golf, but that doesn’t keep them from having a common bond in serving in ministry to reach those in need.

Their friendship intensified this summer following the death of George Floyd. The tragedy triggered a deep response in Hallie Scott, pastor of Archdale Church of God in Archdale, North Carolina. “It bothered me so badly that I called Neil. I wanted to reach out to him, get together and talk about the tragedy,” said Scott. He wanted to just listen and understand what Neil might be feeling, and how this unrest was affecting his good friend. They decided to get together and use a social media forum to talk and listen to each other.

“We didn’t try to be theologians in our sharing,” said Neil Atkinson, pastor of The Heights Ministries (Wilson Heights Church of God). “We just talked, really getting into each other’s head and learning from one another.” Atkinson and Scott recorded and posted three videos on Facebook, capturing their discussion on racism and the church.

As Scott says in one video, people are talking but not listening to each other. Scott asked Atkinson to tell some of his personal story at the beginning their first video. “Listening has to take some action because faith without works is dead. We’ve got to go beyond allowing things to continue as before especially since it is not right,” commented Atkinson. 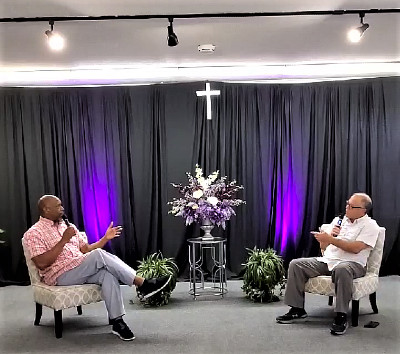 Scott expressed that it is more than just a point of understanding for him. He cannot fully understand racial issues because he is a white pastor. Scott says, “I’m aware that we’ve been a part of white privilege because we talked about that in one of our conversations.” For him, he needed to hear the issues clearly and listen more. He truly wanted to understand the situation since Neil is one of his best friends. “God said, ‘Don’t try to defend your position, Hallie, don’t try to come up with excuses or answers, but sit and listen (to Neil).’” Scott feels it was easier for him to do so because he has respect for his friend.

Atkinson points out that he wasn’t trying to change Scott or his opinions. He simply wanted to share from his perspective, his opinion. “We’re not here with an agenda nor trying to sway each other’s thoughts. I cannot think of anything we wouldn’t say to each other. We can support one another and, of course, celebrate each other.”

Both pastors hope through these video discussions they can reach churches and have a positive impact in their communities. They are setting an example by having these tough conversations between friends, trusting it might help somebody else have similar discussions.

“One of my concerns is that, whenever an incident happens, it gets all the political attention. It burns for weeks till it burns down awaiting the next media frenzy,” said Scott. Neil agrees, “We don’t want our discussions to be another media whim. I think these conversations are something that is helpful.”

Even though the videos haven’t received a huge viewing, it’s okay with them. The real point is they are there for each other. If the videos and conversations help others, it will be an additional blessing. Scott says people keep asking when they will make a fourth video. “There’s no formula to it. It’s not meant to bring anything but glory to God. It’s certainly not to promote us at all.”

Atkinson has been serving on the board of the North Carolina General Assembly for six years. He has accomplished much with Scott reaching out to state churches, and helped establish a balanced leadership in both the Black and white churches. Great strides have been made as they both continue serving and working together toward the goals set out for their individual congregations.

Ultimately, Scott measures his success by the fact that he understands Atkinson at a deeper level. “I’m a better listener today because I trust Neil and he trusts me. In that trust we truly can share together. I hope everybody can pick up on that.”

Watch the video of Pastors Atkinson and Scott in three parts: 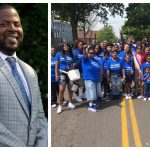 Bringing Hope to the Hood: A Connecticut Church’s Community CommitmentAll Church of God, Change the Story, CHOG, Give Life, Northeast 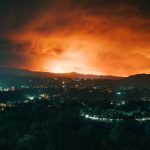