By chogministries
Posted May 22, 2017
In All Church of God, Central, Colleges & Universities
Two Influential Pastors Receive Honorary Degrees from MACU2017-05-222017-05-22https://www.jesusisthesubject.org/wp-content/uploads/2016/07/ChogLogo-Light.svgChurch of God Ministrieshttps://www.jesusisthesubject.org/wp-content/uploads/2016/07/ChogLogo-Light.svg200px200px 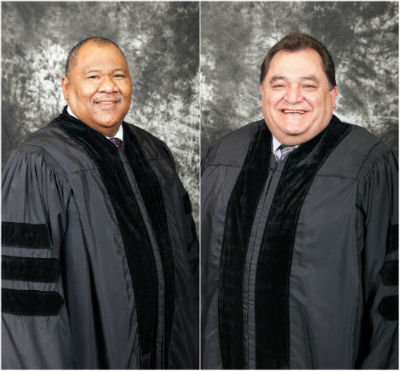 By Whitney Knight and Elizabeth Sieg

Mid-America Christian University honored two influential Church of God leaders during commencement services on Saturday, May 13, at Crossings Community Church in Oklahoma City. Reverends Miki Merritt and Richard Mansfield received honorary doctor of divinity degrees for their contributions to the Church of God movement, MACU, and the world.

“From time to time, the board of trustees of Mid-America Christian University chooses to honor individuals whose lives reflect the qualities, virtues, and professional achievements that we desire to cultivate in the lives of our students,” said MACU President Dr. John Fozard. “Reverends Merritt and Mansfield embody those traits wholeheartedly.”

Miki Merritt has pastored at New Cote Brilliante Church of God in St. Louis, Missouri, since 1991. With his visionary leadership, creativity, and sense of humor, he has contributed to the successful growth of the Church of God congregation. Merritt also serves as presiding elder of the National Association of the Church of God and on several national, state, and local committees.

“It’s an honor to receive this recognition,” Merritt said. “You can’t be a Church of God pastor and not have heard about MACU. It’s a great institution, turning out the next generation of CHOG leaders.”

Richard Mansfield has served as the senior pastor of New Beginnings Church of God in Albuquerque, New Mexico, since 1999. With numerous outreach programs for gang members and impoverished communities, he has impacted countless lives across his state and beyond. In 1997, Mansfield helped start Houston’s Southwest Ministry Center with the guidance of the late MACU president, Forrest Robinson. He served as a board of trustees member for the university for many years and continues to be a valuable supporter and friend of MACU.

“MACU is very dear to my heart,” Mansfield said. “I believe in its vision, in all the different degrees it has to offer, and most passionately in the ministry program. I am humbled to receive the honorary doctor of divinity from them.”

Mid-America Christian University offers a Christian liberal arts education through two dynamic colleges. The College of Arts and Sciences (CAS) offers undergraduate degrees to traditional residential and daytime commuting students at the main campus in south Oklahoma City. The College of Adult and Graduate Studies (CAGS) makes college education affordable and accessible to busy working adults and graduate students. Degree programs are offered online or on-ground at the main campus or through MACU’s north Oklahoma City location. MACU is an endorsed agency of the Church of God (Anderson, Indiana) and is regionally accredited by the Higher Learning Commission of the North Central Association of Colleges and Schools. Visit www.macu.edu for more information.