Sometimes, it’s hard to see the bigger picture when it seems like the current situation is so dire. However, Pastor Manny Rivera of Restoration Church of God in Aurora, Illinois, saw a glimpse of hope when he came to minister there seven years ago.

“It was a turnaround church,” Rivera says. “It was dying out, and they were given six months to turn it around or close the doors for good.” Both he and the church members pushed through that season and achieved what seemed impossible at the time.

Rivera says he knows of some churches that suffered during the COVID-19 pandemic. He shared that his church prospered both in membership and financially during that time. Like many churches, Restoration Church went to online services being broadcast on social media. It was a learning curve for many not familiar with Facebook, Instagram, and YouTube.

“We know we needed to continue to get the gospel out there and preach the Word,” Rivera says. He claims they now have close to 1,000 followers online from across the United States. They now have both an English service and a Spanish service, both in person and online on Sundays.

His wife was concerned that not many were coming to the English services, at first. He told her not to worry, just to wait.

Growth has definitely happened through baptisms, new ministries for adults and youth; Rivera noticed that the biggest age group spans from early twenties to the mid-twenties. Restoration Church baptized twelve people on a recent Sunday, believers both from the English and Spanish services. 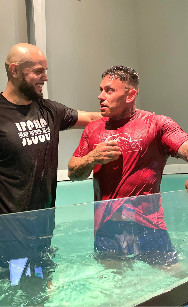 Because of his own redemption story, Rivera has found his love of Jesus is meant to be shared, even to those in prison. Due to regrettable decisions made in his younger years, Rivera knows what life is like behind bars. He knows the pitfalls of trying to get back out in society and create a better life. But he also knows redemption and restoration are possible!

“I’ve been saved for sixteen years,” he says. “I came out of a church in Chicago called Northwest Church of God with Pastor Carlos Sanchez.

While serving as a youth pastor there, he began to pray on where God needed him to be and serve. “I wanted to be different and unique. Not like everyone else.”

Rivera’s known as the “pastor who keeps it real” among his congregation. He uses language they can understand and backs it up with illustrations. Opportunities for everyone, even those who feel they don’t fit in or belong, are available to serve in the church and in the community.

As a kid, Rivera was bullied and usually the last one to be picked for anything. That feeling of not belonging makes him more aware of looking for those who may not usually get to join in or be picked to serve God in some capacity.

Several groups have partnered with the church locally in various programs. Aurora Interfaith Food Pantry set up in the parking lot to supply food to the community. Calvary Church also helped. “Challenge to Change” is going to open two buildings that will provide to those needing transitional housing after prison life, helping them integrate back into society.

“Before I was saved, I came out of the system lost, lonely, and didn’t have any foundation,” he explains. “Many doors were closed in my face because of my background. I made foolish choices when I was younger. I wanted to be a productive man in society and just be given that chance. Unfortunately, I wasn’t.”

Rivera recently made a connection with a YouTube influencer, Julio “JC” Almanza, an ex-cartel member who served time in prison. One day, JC said his video content was changing up because he had been saved and now wanted to share the Good News. Rivera reached out to him and congratulated him on his new life choice. JC responded quickly. Since then, the two have done many Zoom calls and chats discussing the Bible and the dreams they both have to minister to ex-prison fellows.

Almanza came out to Restoration Church three weeks ago and shared his story with the congregation, many of which already knew of JC and had watched his YouTube videos. Then Almanza asked Pastor Rivera to baptize him since Rivera had been his mentor. As the Spirit moved, twenty people accepted Jesus Christ as Lord and Savior that day in a very packed sanctuary!

The mission is simple, and it’s one Restoration Church has fully embraced. Reach God’s people, share the story of love and redemption and hope with everyone, and show compassion and acceptance to the hurting and lost in this world. 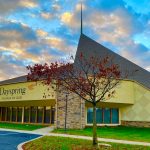 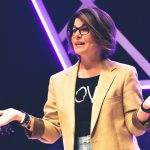