Transformation Begins Outside the Walls in West Texas

By chogministries
Posted September 10, 2018
In All Church of God, Central, Give Life
Transformation Begins Outside the Walls in West Texas2018-09-102018-09-10https://www.jesusisthesubject.org/wp-content/uploads/2016/07/ChogLogo-Light.svgChurch of God Ministrieshttps://www.jesusisthesubject.org/wp-content/uploads/2016/07/ChogLogo-Light.svg200px200px 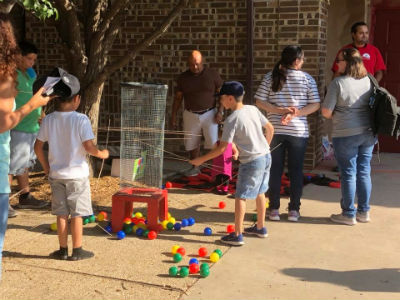 Deep in the heart of west Texas, surrounded by semiarid plains and prized oil country, you’ll find the small city of Odessa. Though it may not garner much media attention, a remarkable story of transformation is developing out of the city’s young Church of God congregation known as New Dawn Fellowship. Focusing more on discipling new believers and not simply packing the pews, the church has celebrated relatively slow, but healthy growth. The congregation, 90 percent previously unchurched, has rejoiced at more than 30 salvations, more than 30 baptisms, and multiple rededications in just three years. On August 5, after outgrowing its previous facility, the community-oriented church enjoyed a grand opening worship service in their new home, welcoming 154 people through their doors.

But only part of their story takes place inside their doors. According to Pastor Wally Schiwart, it’s what happening on the outside that’s really making a difference. In a creative approach to outreach, the church assigns each ministry to team to one of the major holidays over the course of a year. In conjunction with holidays, such as Thanksgiving and Christmas, delegated, coordinated efforts to provide care packages for the homeless, feed hungry families, provide toys for children, and visit the incarcerated—just to name a few—take place with both enthusiasm and excellence. Pastor Wally calls all these projects “Outside the Walls Ministries.”

“From the beginning, we knew we were going to be a church outside the four walls,” he explains. “Our concentration is helping our city in real-world, hands-on ways.” 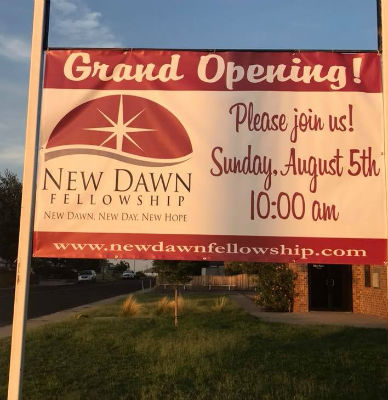 As a part of the vision, Pastor Wally is making the rounds with the biggest and most influential names in the city. Indeed, New Dawn Fellowship could come up with ideas, and implement those ideas, resulting in a variety of good things done in and for Odessa. But what does Odessa really need? That’s what Pastor Wally has set out to find out from the city manager, the chief of police, other civic leaders, and even business leaders. “After that, we’ll compile a list of needs, put a plan together, and form a ministry called ‘Brother’s Keepers’,” Wally explains. “It’ll be a multitude of small, individual Outside the Wall ministries that all work to affect the city of Odessa in a way that makes the greatest impact.”

Like a sports team at half-time, the congregation does need a place to huddle up, refresh, refocus, and prepare for the continued game of life—ministry throughout the week. Thankfully, God’s at work inside the New Dawn Fellowship walls, too. Now the congregation has more space to stretch within those brand-new walls.

“We were renting a facility that seated about a hundred,” Wally recalls, “but we started averaging in the seventies. We prayed about what God would have for us next. Here in oil country, we’re in a boom, so property is not cheap. To lease a facility would have been five to seven thousand dollars a month! We weren’t sure what we were going to do. But a pastor friend of mine from Odessa Bible Church knew we were looking. They’d been there twenty to thirty years and had outgrown their facility. We called it a twofer for the kingdom!” 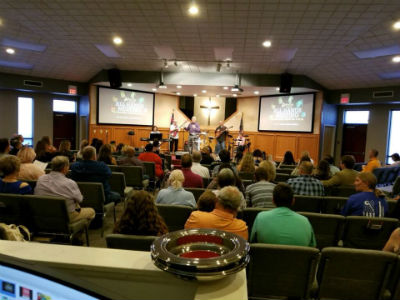 Inside their new worship center on August 5.

Wally wouldn’t describe New Dawn Fellowship as “big-money” church. But he insists God has always provided. Doors continued to open during the process, and ultimately two banks in Odessa were “fighting over” them. Then, when a down payment was needed on the new building, God brought in all the necessary funding in only ninety days.

“We never dreamed in just three-and-a-half years we’d purchase a facility,” Wally reflects. “That just shows how much we can put God in a box!”

Looking ahead to the possibilities, Pastor Wally is compelled to greater dreams. Still, his vision has always been relatively simple in a world of complex business strategies and programmatic solutions. “Transformation is what we’re looking for,” he explains. “On my initial leadership team, one man had confessed he’d never seen his father in church. Today he’s an active member and on our leadership team! God has transformed his life. All the ministries we do are a means to let God use us to introduce his Son, and we let God do the rest.”

In Texas, across North America, and around the world, God is on the move in the Church of God. Join the movement. Give life. Donate today at give.jesusisthesubject.org.