Together in Texas: Growing Churches Join Forces to Thrive and Multiply

By chogministries
Posted October 28, 2021
In All Church of God, Central, CHOG, Leadership Development
Together in Texas: Growing Churches Join Forces to Thrive and Multiply2021-10-282021-10-28https://www.jesusisthesubject.org/wp-content/uploads/2016/07/ChogLogo-Light.svgChurch of God Ministrieshttps://www.jesusisthesubject.org/wp-content/uploads/2021/10/wake_church_two_pastors1_adj.jpg200px200px

What if, instead of from a place of decline and uncertainty, congregations merged from a place of health and growth? What if churches were more concerned about the kingdom of God than advancing their own brand? What if more pastors raised up leaders only to send them out, rather than build up their own ministry? Just imagine the impact on a city if its Christians would set aside competing agendas and rally around the singular mission of Jesus Christ! That was the mindset of two Texas churches that came together at the beginning of the year in Spirit-led, strategic collaboration for the sake of the kingdom.

Merge Church, a Church of God congregation in Conroe, Texas, was less than a year old when the future of the church plant led by Pastor Efrain Cirilo began to look a little different than originally envisioned. Josh Gosney, the pastor of a church with similar origins in the same community, had become good friends with Efrain as they received the same training from Stadia, the Houston Church Planting Network, and an “anchor” church known as Faithbridge, all in partnership with Texas Ministries of the Church of God. As Merge was getting off the ground, it became clear that the goals and the heart behind both Merge Church and Wake Church were closely aligned. “The passion for planting gospel centered churches had grown so deep within us,” Efrain recalls, “that we began to ask, ‘What if our stories are supposed to merge with his [God’s] story?’”

Efrain continues, “Even though both churches were healthy at the time of the merger, we believe that God is doing new things among us with kingdom collaboration. As we come together, we are able to accomplish the mission God gave us at an accelerated pace to reach more people who are far from God.” 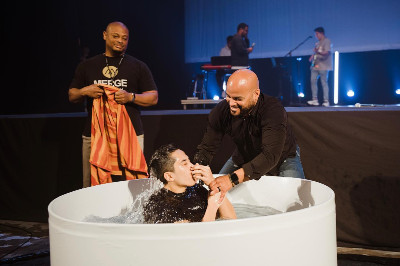 Efrain rejoices over one of the many recent baptisms.

The ministry duo understand there’s an urgency surrounding the Great Commission. There simply isn’t time for surveys, extensive consultations, and drawn-out deliberations over the logistics and risks of following the Lord into the unknown. After all, that which is certain is staring them straight in the face—God had given them a mission to reach 1 percent (that’s seventy-five thousand people) of the greater Houston area “by planting gospel-centered churches that plant churches.” Efrain observes, “With a vision this large, we realized we are better together.”

Like a missing puzzle piece, the mission and vision of Wake and Merge fit together snugly. As the new logo of Wake Church intentionally reflects the “M” of Merge Church, the emphases of the combined ministry also complement one another. “Wake and Merge have always been committed to making disciples who make disciples,” Efrain explains. “There are two major movements in the life of a believer—salvation, and sanctification. Wake’s mission is to wake people up to new life in Christ. Merge’s mission is to lead people into a growing relationship with Jesus Christ by merging our story with his story. Coming together unifies the vision of both churches. Waking up to the gospel by the power of the Holy Spirit is the life-changing moment of salvation for the one far from God. Merging our story with his story is the lifelong devotion of a disciple being sanctified. In other words, wake up and merge!”

Efrain notes that the new Wake Church will be affiliated with the Church of God movement, but that’s ultimately not what it’s all about. The fact that the former congregation under Josh’s leadership wasn’t affiliated with the Church of God movement was never a concern—for both pastors and congregations, Jesus is obviously the subject. And, he is the starting point for everything they do and everything they’re about.

“We start with Jesus always,” Efrain explains. “At Wake, everything we do starts with the gospel, the good news of who Jesus is and what he has done for us at the cross, and the truth that following him changes us in real and lasting ways.” Citing Colossians 1:15–19, he points out that “gospel centrality” is the first of five core values the new Wake Church holds dear. The other four include biblical community, missional living, kingdom multiplication, and “next generation.” 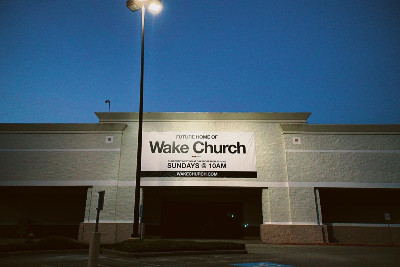 The future home of Wake Church, an old Kroger store!

But when divine math—multiplication—is a core value, some loss is inevitable; however, eternal gains are far greater. For when churches begin to intentionally multiply, they raise up leaders not to add to the size of their own local family, but to commission them to go and plant new churches. This sentiment is built into the very framework of who Wake Church is today.

“We believe in sending our best to plant another church,” Efrain states plainly. “It’s what we’re called to do. We don’t see it as losing people but rather sending people to advance God’s kingdom. And, as we send, God multiplies.”

Every leader the church trains is required to have an apprentice in training, providing strategy to aspiration. Additionally, the church offers a nine-month leadership cohort. Even now, the church has two future planters “in the pipeline.”

As a result of the merger, God also opened a door of opportunity. Church plants, which are known for renting spaces at area schools, often look ahead to the day when they can acquire a permanent place. Wake Church is nearly there. “We hope to move into the new facility by 2022—an old Kroger!” Efrain exclaims. 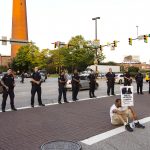 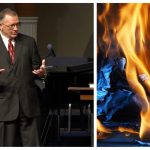