The main building itself is a neo-Gothic revival masterpiece, dressed smartly with pointed arches, niches, stained glass, and stunning stone work. But, it is the spire that most inspires. Standing at 210 feet from the street to the heavens (that’s equivalent to a 20-story building), the spire is an iconic landmark, piercing the sky with a cross on top. Not far from Interstate 5, perched on a hillside, it cannot be ignored. From every direction the traffic slows as it passes by, wondering at the silhouette daring the nearby mountains and sea that set its stage.

It’s called Our Lady of the Holy Rosary Church, so named by an Abbot impressed by the many varieties of wild roses he found there years ago. It’s in Tacoma, Washington, hugging the shoreline of Puget Sound and Commencement Bay, shadowed only by Mt. Rainier. The parish was founded by German immigrants in 1890. It was at Holy Rosary that the young Harry Crosby married Catherine Kate in 1894 and it was to their parish church at Holy Rosary that they brought their young son to be baptized in 1903, as faithful Roman Catholics do; they called him Bing. In 1965, an earthquake toppled the cross from the top of the spire, though the spire itself suffered no damage. Soon thereafter, Bing Crosby came home from California to sing outside as a new cross was set on top.

A few months ago, a 25-foot square piece of plaster fell from the heights of the Holy Rosary vaulted ceiling and crashed to the floor. The sanctuary was then closed, for safety’s sake; 800 hours of structural evaluation and donated architectural expertise followed. Last week, the Archdiocese of Seattle (whose territory includes Tacoma) sent a letter to the Holy Rosary parish explaining that the building would not only remain closed, but be demolished, 210-foot spire and all. The cost of repairs was conservatively set at $18 million. Water damage to the roof and masonry are the chief culprits. The last big investment in the building was in 1994, when $500,000 was spent to place a new copper roof on just the spire. Neo-Gothic revival masterpieces can be pricey to maintain. Think restoring Notre Dame in Paris, after the fire, now estimated to require $493,950,000. 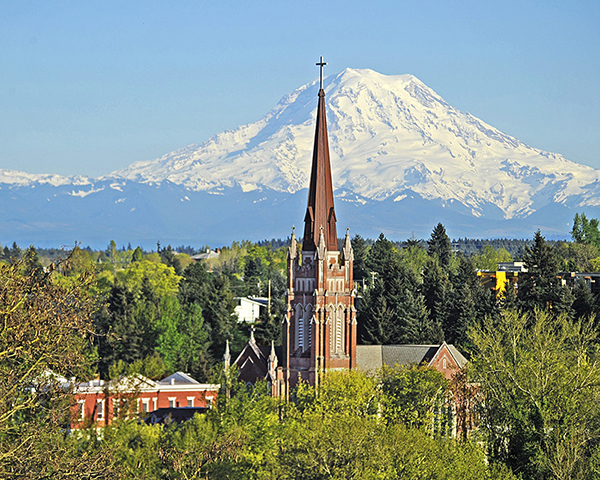 The 296 families that comprise the Holy Rosary parish today do not have the resources to fund the $18 million needed to repair. They have been struggling just to pay the ordinary bills (wages for the small staff, utilities, keeping up the grounds, and so on). Last Sunday’s attendance was 179. The offering was $2,700; the parish needs $6,964 each week to get by; there is $36,000 in the savings account.

You don’t have to be a member of the parish—or even a Roman Catholic—to comprehend the sense of loss and to wrestle with hard questions in the face of such news. I’ve driven by that spire on I-5 for a lifetime, gauging how far I was from home when seeing it from afar, taking my bearings as a student heading back to Warner Pacific in Portland, after a weekend home in Seattle. I even stopped one summer’s day 43 years ago just to see the church building that anchored the spire on a date with a young woman who loved the architecture as did I. To think of the spire gone and the building, with all of its ruffles and flourishes, gobbled up by some stone-crushing machinery and then carted off in dump trucks seems like the end of an age, an epoch ending. Many Holy Rosary parishioners are fairly asking themselves, “Will our church survive?”

Of course, the fate of Holy Rosary is not just a Catholic phenomenon. Houses of worship across the land are finding themselves in the crosshairs. And the congregations that meet in them, too, are wrestling with hard questions of survival. What’s to become of the world, the civilization and culture, we once knew and the churches which once seemed to be anchor whole cities and towns?

“Obsessing over ‘fixing the church’ has created a church-centered storyline that not only misses the point but also runs counter to the narrative God intends for us to live into and out of—namely, the saga of the kingdom of God. It’s time for the church to get over its self-absorption and self-centeredness and adopt the larger and more compelling story of God’s kingdom as its reasons for being….” “There’s a reason Jesus taught us to pray, ‘Thy kingdom come…‘ not ‘Thy church come.’” Jesus did not say, “Seek ye first the church,” but instead, “the kingdom of God.” He did not come to bring “church more abundantly,” but “life more abundantly.”

Still, we sometimes default to imagining that God’s primary agenda on earth focuses on building the church and that what happens on Sunday mornings is the most important definition and expression of mission and ministry.

The word church appears only three times in the Gospels (once in Matthew 16 and twice in Matthew 18). The original Greek word translated into the English word church is ekklesia, “the called-out ones.” First-century audiences understood the term, widely used to describe those called out from the community to look after its welfare, a word that suggests “stewardship of community life.” This is the word Jesus chose, from the popular understanding of the time, to describe what we call church. McNeal argues that the church (ekklesia) was never to be focused on itself; “…the interests and issues of the community were the rightful scope of its agenda.” 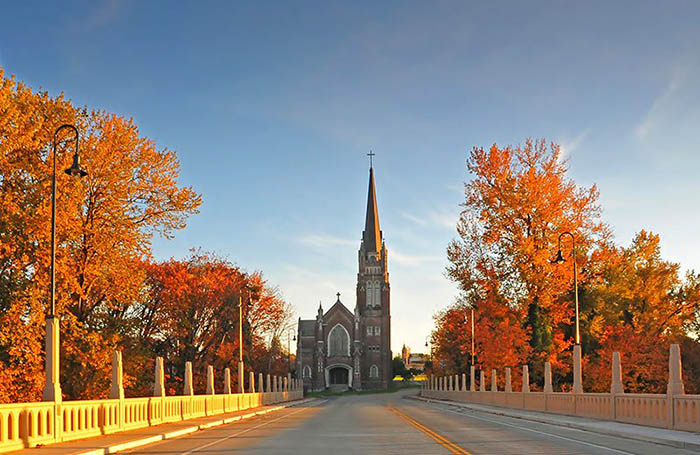 Matthew speaks much more often of “the kingdom of heaven,” mentioning it 31 times. The phrase, “the kingdom of God” is used 51 times in the Gospels. Mark, Luke, and John never make mention of the ekklesia. Jesus seemed to be preoccupied with the kingdom, much more so than the assembly. He showed us the kingdom in action and taught His followers to pray for the kingdom to come to earth, here and now. His ministry was focused on redemption, today, in the present tense, bringing kingdom life to bear on every dimension of human experience.

“The church’s role as a vital force in society is increasingly in question. The kingdom of heaven, on the other hand, is never irrelevant,” McNeal contends. “God’s plan and purpose in the world is always cutting edge, because the kingdom is all about bringing healing to the afflicted, binding up the brokenhearted, releasing people from captivity, and redeeming everything diminished by sin.” Check out Jesus own words in Luke 4:16–21—the text also codified in the purpose statement of the General Assembly of the Church of God in the United States and Canada.

Our markers of success do not always reflect kingdom priorities. We must never forget that “the church is not the point of the kingdom; the kingdom is the point of the church.” When we are saved, we’re not just saved from something, but for something: that something is bringing the kingdom to life in the world God loves so much, He gave His Son to save.

I’m a fan of church buildings that become engines of kingdom life. I understand the need for meeting houses. I can appreciate art and stained glass that tell stories and stir the soul. I have loved driving by that elegant Gothic spire on Tacoma’s horizon for all of my years. I have seen church buildings become kingdom outposts because they provide space and impact for communities and neighbors throughout the week, who may never have considered walking through the doors on Sunday. And, we all know that the ekklesia can be fueled up for kingdom work inside the walls of a house of worship for opportunities outside.

But, be careful not to confuse the primacy of kingdom reach and influence—the “salt and light” of Jesus’ Sermon on the Mount–with the preservation of a local institution or preferred snapshot of church life. As long as “Good News is preached to the poor,” and we “proclaim that captives will be released,” and “that the blind will see,” and “that the oppressed will be set free,” and “that the time of the Lord’s favor has come,” the ekklesia will prosper, with or without a steeple. As long as we are “an invading force” (McNeal), permeating the society around us, the literal presence of “the body of Christ” until He comes again, touching, speaking, listening, healing, calling the best out of others, breathing life in word and deed, we will be the most relevant and influential crowd on the planet.

There’s a move afoot in Tacoma right now to raise one million dollars immediately, to save Holy Rosary. The whole city is being urged to get involved, on the premise that the church building itself is a signature and historic marker for the whole community, believers and unbelievers alike. Perhaps, the million dollars will be found; 17 million more dollars will still be required. Whatever happens to the neo-Gothic revival masterpiece, Jesus people in Tacoma can bring the kingdom to life there. You can, too, where you live. We are the Church of God, after all, not the province of any man, but of heaven itself.

What does hell own in your town that you can take back? What dark corner in your community needs the light of Christ? Where can you move the kingdom lines forward, reclaiming ground now imprisoned by the devil’s grasp? Frame this fall’s planning for the new year with questions like these. Make this your congregation’s ambition and the rest will sort out. Seek ye first…the kingdom.

Be encouraged. As long as Jesus is the subject, at the center, and in command, ours is a most hopeful cause.