Then and Now: A Closer Look at Two Women Pastors in the Church of God 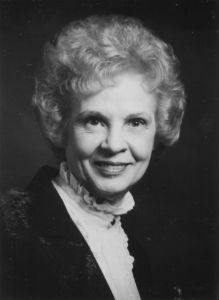 The Church of God movement is one born out of a devout commitment to telling the ongoing story of how God is at work among his people. The Church of God is in the business of changing the world around them by making Jesus the subject, and by demonstrating the love of Christ, just as Jesus did. A large part of this narrative, that is both historical and still permeates into congregational discourse communities today, is the role of women within the scope of the movement.

While women have historically been involved in the movement’s continuation and growth, it would be a disservice to acknowledge them as simply behind-the-scenes operators when, in fact, they have long been at the forefront of precipitating change. One of the most highly revered and remembered female leaders within the Church of God movement was Rev. Lillie S. McCutcheon, a devoted minister whose call brought together countless lives over the course of her forty-three years of pastoral care and guidance.

In April 1945, Lillie began her life’s ministry in Newton Falls, Ohio, acting as one of the most influential female pastors in the movement’s history. Her initial congregation was small, comprised of mostly women, and lacking a permanent meeting location. Pastor Lillie, however, led the community boldly, beginning in an interim leadership role but eventually moving into a more stabilizing position as an ordained pastor. She was ordained on January 2, 1947, just eight days before the wedding ceremony of her dear friends, which she had been asked to officiate.

As a mother, wife, and pastor, Lillie was tasked with countless responsibilities and demands on her time. Still, however, she worked tirelessly to learn and grow as a minister without sacrificing the needs of her own family. “Those were very difficult years,” she said in a biographical interview administered by Barry L. Callen, “but at the time I didn’t think they were difficult. I was just so excited and busy and I wanted to know everything I could know about being an effective minister.”

Over the next few decades of her ministry, Pastor Lillie became a revered preacher and lecturer, both in her hometown and in other neighboring communities. She was dearly loved by her congregation at home, and her recognition grew widely across the church. In December 1988, after more than four decades years of enduring service, Lillie McCutcheon retired as a result of her failing health. In a newsletter detailing a farewell event in her honor, Pastor Lillie was commemorated as “a true and faithful servant to the church.” The newsletter continued, “and because of the strong foundation she has laid it will continue to grow, both spiritually and physically in the future.”

Photo: Among local male pastors, Pastor Shannon stands confident in the Christ who called her.

Out of Lillie’s trailblazing efforts, countless women were inevitably destined to follow in her footsteps and rise up as leaders within the Church of God. Among them is Shannon New-Spangler, the senior pastor at Harvest Point Church of God in Lordstown, Ohio. Pastor Shannon began at Harvest Point after her ordination in 2009 after having completed her bachelor of arts in Bible and religion (2002) and her master of divinity (2008), both at Anderson University.

Harvest Point originated in a home in 2001 and has flourished ever since; its congregation currently convening in Lordstown Plaza with ambitions of moving into a new building on the twenty-five acres of land they purchased in 2013. “When I was searching for a congregation to serve I considered Harvest Point because, honestly, they were open to a woman in ministry [and] there are very few of those,” Pastor Shannon says. “They also seemed to be open to the style of leadership I presented and the call I felt to serve the community and share God.”

While Pastor Shannon feels both supported and encouraged by the congregation that she currently serves, such has not been the case universally in her past experiences. “My story is probably not unique here,” she comments. “Most women I know in ministry have dealt with these and similar issues.” Pastor Shannon said she was often challenged on her call, told “her place” by leaders and congregation members, and kept from certain duties because of her gender. Even finding an initial job pastoring was a challenge for her. “I got so many rejection letters, I stopped counting,” she says.

Although faced with the unjust prejudices of historically patriarchal church leaders and laypeople in our culture today, Pastor Shannon said she decided many years ago that it was not worth the effort to fight for her right to be a minister with someone who doesn’t believe in the authority of women. “It’s an exercise in futility,” she states. “I also don’t feel a lot of need to defend my calling. I know God calls women, I know God has called me, and I’m not going to spend a lot of time arguing about it.”

In refuting the voice of the dissenter, Pastor Shannon has grounded her ministry in her desire to both serve and shepherd her congregation, paying little attention to those who call into question her qualifications based on gender alone. The scripture that spurs her in her calling is 1 John 4:11–12, which reads, “Dear friends, since God so loved us, we also ought to love one another. No one has ever seen God; but if we love one another, God lives in us and his love is made complete in us”(NIV). “This is my mission as a pastor and as a wife, mom, daughter, [and] friend,” says Pastor Shannon. “My foundation, call, and ministry [are] all about love.”

Megan DeBruyn is a 2017 Anderson University graduate and communications assistant at Church of God Ministries.