By chogministries
In From Bob Moss, The Window
Posted July 17, 2019

The 99th General Assembly convened in Orlando, Florida, June 27–30, 2019. Among the topics on the agenda was an update on Project Imagine. It is included here in its entirety.

Midway through his first term, Jim Lyon shared a visionary proposal with the Ministries Council describing ways that the work of the movement could be strengthened by regaining common language and purpose, as well as a commitment to functional unity through a collaborative ministry approach. He pointed out how the movement could be strengthened if the work of this General Assembly and the work of each state and regional assembly, as well as every other entity in the multi-faceted ministry of the Church of God, could work together in concert—in harmony and in teamwork.

In response to Jim’s proposal, the Ministries Council brought a motion to the 2017 General Assembly in Wichita calling for further study of these ideas.

This assembly approved the motion with an 81-percent vote directing the Ministries Council to assemble “a diverse roundtable of representative leaders” to consider new ways to achieve functional unity within this movement. This diverse forum became known as the Project Imagine roundtable; a name chosen to represent an open, creative, and forward-looking attitude. The overarching goal of the roundtable was to present a future-oriented plan to the General Assembly in 2019.

While the roundtable did not prepare a plan for your approval, some significant strides were made which will undoubtedly have long-lasting positive impact on the Church of God.

• Dr. Diana Swoope chaired the roundtable meetings.
• Ben Sand of the Portland Leadership Foundation was appointed by the chair to be the facilitator of the group process.
• Dr. Barry Callen served as writer, synthesizing the work of the roundtable in a report to the Ministries Council.

Part 2—The work of the roundtable described

1. The launching of Project Imagine roundtable uncovered some deeply needed crucial conversations. Consequently, progress has been made toward strengthening relationships and working partnerships. To illustrate:
a) Quarterly conference calls have been initiated by Handel Smith between Church of God Ministries (CGM) and regional pastors.
b) A team of regional pastors and CGM staff worked diligently together to address the conditional deeding confusion and propose a new way forward.

2. A pilot region, as described by the roundtable, was voluntarily formed on the Pacific Coast and invited CGM to the table. This experiment will be closely watched to glean transferable principles to help the greater movement.

In essence, members of the pilot region interface as a collective impact group. Each entity retains its own governance and resources but cooperates together to achieve a ministry strength previously unrealized.

3. The Project Imagine roundtable also recommended the development of a networking table, which the Ministries Council endorses, and urges our general director to assemble.

The second recommendation endorsed the establishment of a new voluntary networking table. Convened by Church of God Ministries, this networking table will create a forum for the broadest possible collection of voices and ministries within the movement. The Table will routinely explore new and better ways of working together (sharing calendars, ministry initiatives, passions, ideas, collective opportunities, etc.) and maximizing the prospects of developing synergistic strength for the enhancement and success of the movement’s many ministries.

Faithlife is a likely platform to undergird the networking table.

Anticipated Outcomes from a networking table:
1. A collaborative approach is achieved.
2. Common vision and language are experienced.
3. Increased interface between various ministries and Church of God Ministries is achieved.
4. Interdependent relationships are fostered that reflect the twin heritage of the Church of God—an autonomy that embraces accountability (freedom and unity). 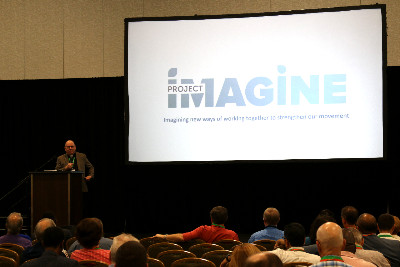 Bob Moss speaks to the General Assembly at Convention 2019.

Part 3—My personal reflections as the convener of the roundtable

The discussion at the roundtable was difficult and often painful. Much of the agenda was diverted to airing grievances. Because of the tension that emerged, the original task set before us by this Assembly was unfulfilled.

My observations come from the culmination of serving with the General Assembly for many years, as a former two-term chairman of this Assembly and the Ministries Council, as well as a former state pastor of Indiana and decades of pastoral ministry in the Church of God. I have been asked by our chair to share these personal reflections shared last March with the Ministries Council.

I believe that we need to rediscover the centrality of this General Assembly to our collective work as a movement. After all, the constituents and voters who make up this assembly are the same pastors and leaders who comprise the various state, regional, and provincial assemblies.

I am concerned by some language I hear. It seems once the General Assembly adjourns, we tend to forget the important relationship between this assembly and the smaller assemblies that gather in states, provinces, and regions.

1. The motion passed in the 2017 General Assembly called for “all ministries and agencies within the Movement to join with the Council’s exploratory process, in the spirit of unity, sharing necessary data and perspective.” Many ministries, agencies and assemblies shared data, but others declined to share information. This was disappointing and limited the scope of our research for the roundtable. It seems to point to a lack of recollection that the Ministries Council and the General Assembly are comprised of all of us and are attempting to serve and represent all of us.

2. The second illustration points to the work of Standing Committee on Credentials. In 2017 this assembly passed a standardized credentials manual for our movement. Yet subsequent to that action, various state assemblies have been reluctant to adopt it. Some mistakenly view the manual as being controlled by staff of Church of God Ministries, while in reality, it was a broad group of 24 representatives from this assembly who compiled and presented the standardized credentials manual.

These two illustrations suffice to say that we need a renewed understanding of our commitment to work together in unity as one movement.

I conclude my report with a quote from chapter ten of the late Dr. Gil Stafford’s book, Vision for the Church of God at the Crossroads. “From the earliest days of the Church of God reformation movement, a strong sense of being connected with each other has existed. We were in ministry together. We belonged to each other. We cared about what went on throughout the length and breadth of the movement. We were family. And to a great extent this still exists, but that historic sense of connectedness is eroding rapidly. I call it to our attention so that we can be intentional about what takes place next. Do we find it acceptable to lose this sense of connectedness? Are we comfortable with that loss?”

I am convinced that we must not be comfortable with that loss of connectedness. The work of Project Imagine clearly revealed our need for new wineskins for the generations to come. It won’t be easy to make these changes—but together our movement will find a way.