The True Story of Ministry in Paradise

By chogministries
Posted May 30, 2013
In All Church of God, Global Strategy
The True Story of Ministry in Paradise2013-05-302013-05-30https://www.jesusisthesubject.org/wp-content/uploads/2016/07/ChogLogo-Light.svgChurch of God Ministrieshttps://www.jesusisthesubject.org/wp-content/uploads/2016/07/ChogLogo-Light.svg200px200px 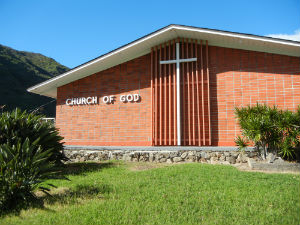 Gentle breezes, warm sunshine, swaying palm branches, and hundreds of miles of beaches typify the Hawaiian vacation. But ministry in Hawaii is anything but a vacation. In fact, the vacation atmosphere of Hawaii is at least one of the obstacles for evangelism and discipleship on these islands separated from the rest of the country by some 2,400 miles of ocean.

While Pastors Tim and Josie Vickey are on special missionary assignment to Malawi, Bob and Barbara Christensen have offered interim services for a few months. They will tell you that ministry in Hawaii isn’t exactly living a pastor’s dream. “Well, it’s easy to agree that this is a beautiful place to live, but it’s a difficult place for the church,” Bob explains. “It’s a very international population—Korean, Japanese, Chinese, and more. Hawaii is a difficult place to win believers. We’re right next door to a Taoist temple and close to a Buddhist temple. There’s a lot of turnover, even though the church is in a stable neighborhood. And the economy is expensive—a modest house will run you $600,000.”

Residents don’t always stay long, especially those who are serving in the military. The topography of the region also inhibits the visibility of the Aina Haina Church of God. “The location is isolated, hard to find,” Barbara explains. “We have mountains all around us, and we’re up in a valley along winding streets.” As a result, the gospel has had to be brought to where the people are. Since the early days of ministry in Hawaii, innovative ways to reach the lost have been put into practice. 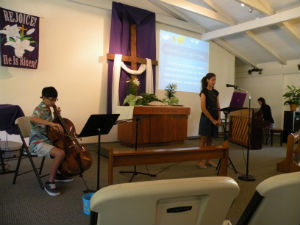 Brice and Nancy Casey were the first missionary pastors sent to Hawaii. Brice and his late wife enthusiastically embraced the Great Commission in 1968 when they began their assignment. “I was ministering in Hawaii during the Vietnam War,” Brice recounts. “There was a significant presence of military personnel. I started a midweek gathering for them in the Pearl Harbor area.” The Caseys brought the good news to the people; they did not wait for the people to come to them. According to Brice, in an article he wrote for Missions Magazine in January 1971, “Our home Bible studies have opened to us a unique means of ministry…it is challenging and also in tune with the New Testament pattern for evangelism.” Referring to the population in Hawaii that is very unfamiliar with Christianity, Casey wrote: “[It] demands that the church move out beyond the four walls and go to the people.”

Casey recalls the difficulties of doing the work of the Lord in a place where the gospel of Jesus Christ is foreign. “Hawaii is perceived as a paradise. But I found it a real challenge to minister in a recreational environment. People come and go to Hawaii for pleasure. Even the people who live here naturally have somewhat of a recreational temperament.” This recreational mindset rears its head when matters of spiritual growth, discipleship, and commitment come into play.

The influence of Eastern religions also poses a challenge for ministry. Brice shares a story of visitors to the Church of God who were confused by the limited use of touch and imagery in the Christian worship. Brice also learned that the men were offended by the Christian concept of repentance. “These men felt like repentance showed weakness among their peers.” In spite of the challenges, the Caseys saw church growth, children’s ministry expansion, and helped oversee administrative and legal issues. To this day, the Vickeys continue to carry on the legacy of faithful ministry began several generations ago. The Aina Haina congregation has generously supported their work in Malawi too, even while ministry continues in Hawaii.

The Church of God beginnings in Hawaii date back to 1908 and a young Japanese minister who had picked up a copy of the Gospel Trumpet. In 1955, Curt and Carole Loewen, of Warner Pacific College (then Pacific Bible College), moved to Hawaii and met other Church of God people there. These families, along with military personnel stationed in Hawaii, formed the Aina Haina Church of God, first pastored by Carl Riley. Their first sanctuaries were a member’s home and a steakhouse. Among an exhaustive list of names representing individuals who have made an impact on the Church of God in Hawaii is the uncle of Church of God Ministries general director designate Jim Lyon. “My uncle Jack Taylor, and his wife, and my aunt, Madeline Taylor, traveled to Hawaii often and invested in the beginnings of the Church of God there.”

For more information about the history of the Church of God in Hawaii, and around the world, order your copy of Into All the World from Warner Press at www.warnerpress.org, or call 800-741-7721.