The Storied History of Campus Ministries at AU

By chogministries
Posted October 17, 2017
In All Church of God, Colleges & Universities
The Storied History of Campus Ministries at AU2017-10-172017-10-17https://www.jesusisthesubject.org/wp-content/uploads/2016/07/ChogLogo-Light.svgChurch of God Ministrieshttps://www.jesusisthesubject.org/wp-content/uploads/2016/07/ChogLogo-Light.svg200px200px 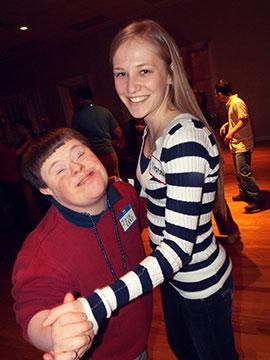 Photo: AU students participate in ministries such as Differently-Abled.

Ministry opportunities have been a part of Anderson University’s campus since its inception in 1917 as Anderson Bible Training School, growing larger along with the enrollment of students. However, the catalyst for structure came when President Robert H. Reardon hired Don Collins (BA ’51), who had been working as the pastor of Park Place Church of God, as the college’s campus pastor in January 1978.

When Collins began, there were only two defined ministry activities—an annual weekend retreat and spiritual emphasis week. Collins sought to create a new campus ministry program and utilized students’ help in order to do so. “A senior offered to spend January polling the campus about what a campus ministry program might look like; then writing a summary, for which he got academic credit,” Collins wrote in his autobiography, There Were Angels Along My Way. Soon after, he created two student assistant positions in his office, as well as a campus ministries faculty committee.

Another popular campus ministry that came about under Collins is VisionRevision. This ministry originated in 1980 as a week of chapel sessions and other activities to encourage the arts as lens through which to see life and faith from new perspectives. It continues today, with the addition of dance, which Collins knows would have translated well into the week, though it was not allowed on campus during his time as campus pastor.

“I also encouraged students who were having faith struggles to participate,” said Collins. “Maybe what they produced was more about doubts than faith, but I told them, ‘That’s a part of your faith journey as well.’”

Campus ministries have been a great source of spiritual guidance for students, staff, and faculty on campus, and this tradition is sure to continue into Anderson University’s next one hundred years.

Anderson University is a private Christian university in central Indiana. Anderson University continues to be recognized as one of America’s top colleges by U.S. News and World Report, Colleges of Distinction, and The Princeton Review. Established in 1917 by the Church of God (Anderson, Indiana), Anderson University offers more than fifty undergraduate majors and graduate programs in business and theology.