The Rising Influence of the Church of God on South Sudan

With continued expansion in northern Uganda, the influence of the Church of God on South Sudan is also on the rise. Though South Sudan achieved independence in 2011 when Africa’s longest civil war ended, tremendous socioeconomic and political struggles persist. Clashes between clans, tribes, political parties, and religions have left behind widespread destruction and hopelessness. It has been reported that over 1.2 million refugees have fled South Sudan for Uganda, the country where Global Strategy missionaries Tim and Colleen Stevenson have worked for thirty-four years. Their work is having a direct impact on South Sudanese refugees as the Church of God establishes “centers” of hope, each noted for its congregation, school, well, and other programs for physical and spiritual health.

Tim and Colleen couldn’t be more excited about what God is doing. “First of all, we’re thrilled that many of our South Sudanese brothers and sisters from the churches that we’ve worked with in South Sudan are now connecting on the Ugandan Side,” Colleen explains. “They are meeting up and are continuing by starting a church in the camp.”

In the refugee camp, the believers aren’t meeting in a building or even a tent. They’re meeting under a tree—a large fig tree, to be precise. Even as they make plans to build a structure, they’re planning on building it around the tree, which has meant far more than shade and shelter to them. “This well-established, healthy fig tree seems to represent the hope of these Christians to show the church is alive!” Colleen exclaims. “We praise God for that!” 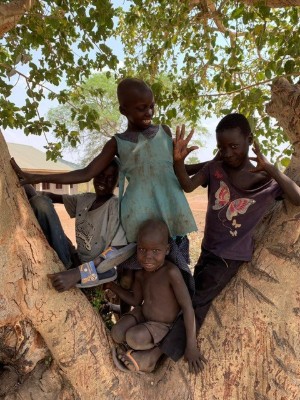 Children climbing in the fig tree.

Tim and Colleen are also excited to see partnerships make it possible for a high school to be established in the refugee camp. One of those partners is Kinderhilfswerk Global Care in Germany, continuing a “strong developmental relationship” with the Church of God in Germany started in the days of missionaries Stan and Marion Hoffman. From the United States to Canada to Germany and beyond, the support is a tremendous encouragement for the Stevensons. “This is one of the very few high schools in the entire camp vicinity and will impact thousands of youth looking for a future in education and training.”

Additionally, plans are in place for a primary school. A well has already been drilled to supply drinking water for these educational institutions. “It is the hope that one sees coming out of a tragic situation within South Sudan, where there has been internal conflict for many years, causing erosion of the whole social structure there,” Colleen explains. “We hope for a future of gathering together to worship, of continuing education, clean water, child sponsorship, and a better tomorrow.”

Certainly, the conditions of the camps aren’t ideal, but they’ve been a blessing to the refugees from South Sudan. In the camps, refugees are offered some level of peace and order by the Ugandan government, as well as relief and aid from faith-based groups and NGOs. Part of the work of the Church of God in Uganda has been to offer relief, aid, and encouragement. “As missionaries, we know that showing what we speak and believe is the only real value of being in communities,” Colleen reflects. “The gospel does give hope to those who have been raised and live in a harsh, unforgiving reality. Through the church, the fellowship, growth, and spiritual fruits that come from salvation can help change the face of hurt, destruction, and hopelessness.” 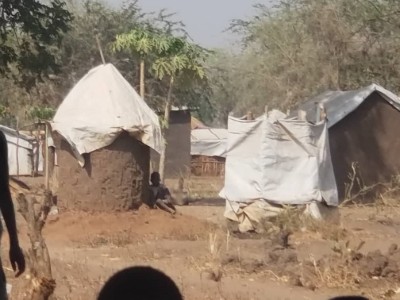 Housing in the camps takes a variety of forms.

Over the years, the influence of our Church of God missionaries to Uganda has reached other countries, too, such as Rwanda, Burundi, and the Congo. Through an international expansion of Leadership Focus, a renewed emphasis on leadership development and discipleship has taken hold in Uganda. The Stevensons celebrate this development and look forward to seeing more and more great things happen in the coming months. From the establishment of schools, to the development of child sponsorship programs, to making progress in the fight against AIDS, Tim and Colleen Stevenson have made, and continue to make, a tremendous difference in Africa. Even so, they take it all in stride, and recognize there is still much to do.

“The greatest support, care, and advocacy come from ministry teams that visit, invest and carry the message across,” Colleen explains. “All of them support missions, missionary work, and impact the partnered churches. There are still many areas where the church has not reached, and if we did have more funding, both personal and in promotion of successes and opportunities, there is no limit to where the work could grow.”

Learn more about Tim and Colleen Stevenson, and discover opportunities for support, at https://www.chogglobal.org/team/tcstevenson/.