By chogministries
Posted September 4, 2013
In All Church of God
The Parachuting Pastor2013-09-042013-09-04https://www.jesusisthesubject.org/wp-content/uploads/2016/07/ChogLogo-Light.svgChurch of God Ministrieshttps://www.jesusisthesubject.org/wp-content/uploads/2016/07/ChogLogo-Light.svg200px200px 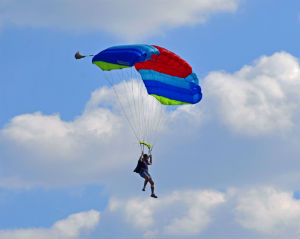 #ThankGodforRipcords. That rush you get when jumping out of a plane. Downward acceleration is ultimately matched only by air resistance at terminal velocity until—Poof! A parachute opens and you’re instantly snapped into a seemingly silent, slow drift back to the ground. Skydiving may bring out the bravado in some, but there’s one kind of parachute drop that Jeff Overturf and family have found to be an even wilder ride than plummeting toward earth at 120 miles per hour.

Sometimes planting a church is like being dropped in the midst of a war zone. In a very real sense, Jeff Overturf understands the difficulty and danger of going to battle for the kingdom. “A parachute drop is where you go into an area where no one knows you and you don’t have another church nearby. It’s like World War II where they drop you 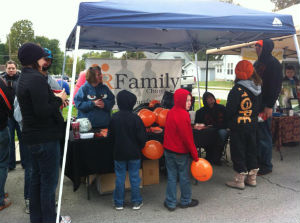 behind enemy lines and you cause all kinds of havoc.”

Pastor Jeff Overturf, of Republic Family Church in Republic, Missouri, isn’t the typical pastor from the church culture of the last century. In fact, previous ministry taught Jeff and his wife Jill that their style connects well with the unchurched, but wasn’t entirely the longtime churchgoer’s cup of tea. So when the Overturfs landed on Republic soil, the first thing they didn’t do was post a sign at the local Christian bookstore announcing their presence. Instead, Jeff logged onto Craigslist and posted an ad about joining musicians in the community who just wanted to jam. Two and a half pages of replies came in from individuals and bands who had no interest in church but who simply wanted to make music.

Today, more than half of Republic Family Church is made up of musicians and friends of musicians from that original Craigslist experiment. “We don’t do much ‘normal.’ We’re intentionally not normal,” Jill explains.

Take a look around their worship facility settled in a strip mall and you may mistake the room for a comedy club or coffee shop. “We have tables and chairs and couches in our seating area,” Jeff explains. “Dress is extremely casual. We use a lot of humor with most of what we do. A lot of churched people actually get turned off by that when they come in, and don’t come back.” 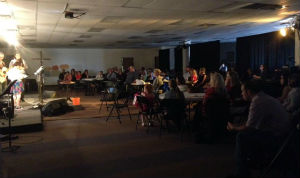 Jill adds, “We don’t have rows, people sit in a casual atmosphere, and they get up and get coffee right in the middle of the service.” And that’s perfectly acceptable for the Overturfs and Republic Family Church.

Republic Family Church gives away popcorn to students at the local school when rewards are warranted for a job well done. Today the school, whose colors were intentionally incorporated into the church’s logo, knows the church as a friend. Once a month, the school has a faculty in-service day that gives students a day off but catches parents off guard. The church now offers a fun ministry for these kids (and their parents) scheduled for these days. And when prom looms on the horizon, teens that just don’t have the means have come to rely on the church’s Gown and Tie ministry, which provides a professional quality pampering and fitting experience—including alterations—for low-income families.

“Our mission is ‘Belong, Believe, and Become the Family of God.’ The biggest deal is belong. It is one of the best ways to reach the unchurched. People want to belong. They’ll join softball, the Elks Club, and so on. When you walk into anything that ‘R’ Family Church is doing, you’re a part of us. You belong. You don’t need to be saved and baptized to pass out bulletins. We’re making sure that you know you belong the first time you meet us.”