The More We Get Together: Gospel Music Unity Services Spread

By chogministries
Posted April 8, 2013
In All Church of God
The More We Get Together: Gospel Music Unity Services Spread2013-04-082013-04-08https://www.jesusisthesubject.org/wp-content/uploads/2016/07/ChogLogo-Light.svgChurch of God Ministrieshttps://www.jesusisthesubject.org/wp-content/uploads/2016/07/ChogLogo-Light.svg200px200px 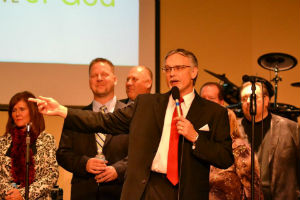 Unity services are not altogether a relic of the past. In recent years, more churches are discovering they can do more together than apart. Some are coming together for fellowship and worship; others are realizing the greater impact of joint service projects in their communities. Ultimately what brings them together isn’t the point; the fact that they are getting together reflects a foundational oneness of the body of Christ that can’t be divided by distance, cultural chasm, or generational gap. The love of the Lord and good old gospel music are bringing congregations from several Midwest states together for times of spiritual refreshment and revival.

As a Church of God pastor who has served in positions at the local, state, and national level, Mitchell Burch has made an impact on a wide spectrum of ministry. Though his primary ministry role is currently senior pastor of the Towne Boulevard Church of God in Middletown, Ohio, pastoral ministry is not the only thing he enjoys doing. From an early age, this influential leader born to Church of God pastors in the hills of West Virginia had a hankering for southern gospel music. Over the years, he has sung baritone and lead for a variety of groups. A few years ago, he had the vision to host several Church of God gospel artists at Towne Boulevard for a weekend of Gaither 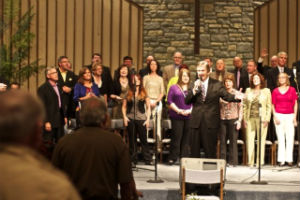 Burch’s original intention was to plan such a gala each Memorial Day weekend for his homechurch. But after the first event, he says, “The overwhelming momentum of the first Southern Gospel Gathering was contagious, and people who attended the first event went home and started talking about it. We started getting calls from pastors and local church people asking me to consider bringing the SGG family to their region.”

The enthusiasm for the Southern Gospel Gathering—featuring Burch’s group, the Townesmen & Shelly, as well as the Little Paint Quartet, Eventide, Common Bond Quartet, and the Profitts—continues to grow as more and more churches catch wind of the opportunity. Churches come from miles around to unite in worship for a weekend of concerts and hymn singing. Saxophonist Scott Snyder, dubbed the Kenny G of the Church of God, has added further appeal to the seasoned lineup of artists.

The first Southern Gospel Gathering attracted thirty-five congregations from seven different denominations. Everywhere the SGG hosts a gospel music weekend, the response is equally impressive. These congregations want to worship and fellowship together, and each time they do, they spend time with the family of God that is so much larger than their local church. “We are finding that Southern Gospel Gathering events are likely the largest regional unity gatherings currently taking place in the Church of God,” Burch explains. “A uniqueness is that all the groups are servants in local congregations of the Church of God. It is different in that the artists are not full-time, on the road groups, and the cost of bringing an SGG does not demand a stadium or huge arena, but are for the most part done in larger local churches and regions where the Church of God is strong.”

The next Southern Gospel Gathering will be held in Middletown, Ohio at the Towne Boulevard Church of God, May 25–26, 2013. Another SGG is scheduled for the First Church of God in Morehead, Kentucky, September 20–21, 2013. Unity services like these continue to be added to the calendar. For more information about Southern Gospel Gatherings, visit www.townesmenandshelly.com, e-mail gwoodrum@towneministries.org, or call 513-422-1021.