The Marathon Minister: A Pastoral Profile

By chogministries
Posted September 16, 2020
In All Church of God, CHOG, Southeast
The Marathon Minister: A Pastoral Profile2020-09-162020-09-17https://www.jesusisthesubject.org/wp-content/uploads/2016/07/ChogLogo-Light.svgChurch of God Ministrieshttps://www.jesusisthesubject.org/wp-content/uploads/2020/09/bj_fuller_collage-scaled.jpg200px200px

B. J. Fuller never thought he would run a 5K or pastor a church. Not long after saying those words, he is well on his way to running a marathon in every state and is now leading his congregation through a pandemic. As a young and recently ordained minister, his eagerness to serve God and the church is so vibrant, it is hard to imagine he ever wrestled with that calling. But B. J.’s new role as a lead pastor, much like his passion for fitness, is something that caught him by surprise.

B. J. was thirteen-years-old when he accepted Jesus as Savior during Vacation Bible School at Fedscreek Church of God in Fedscreek, Kentucky. Later, he felt God’s call to preach. While he fought this a little, he thought he might serve as a youth pastor one day. At age nineteen, he preached his first sermon, which led to many years of serving in associate pastor roles and pulpit supply.

“My main priority in my first sermon was to not screw up too badly,” B. J. remembered, with a laugh. “I heard that new speakers usually struggle to speak for five minutes. I wanted to avoid that, so I spent one minute on each of the Ten Commandments.” 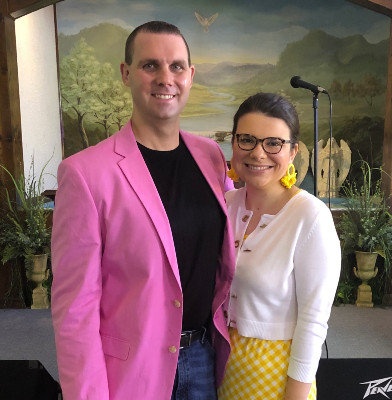 B. J. Fuller and his wife Rebecca.

As life went on, B. J. found himself living bivocationally. He held day jobs in education and banking, preaching on Sundays in the Kentucky East Church of God District when needed. In 2012, he married his wife Rebecca and, shortly after, joined the YMCA to mitigate hereditary risk of cardiovascular disease. Friends he met during his simple workouts encouraged him to sign up for a local 5K. He signed up to stop their hounding, saying he would do that one race, but never again.

Six years later, he has now lost count of the number of 5K and 10K races he has run, and has completed thirty-nine half-marathons and fourteen full marathons to date. Running keeps him motivated, helps him honor and rely on God, and gives him an outlet for stress relief. Training and preparation for races has also paralleled his training and preparation for ministry.

“When I first started preaching, I made the mistake of not preparing sermons well, because I thought that meant I was letting the Spirit take the lead,” B. J. said. “We can only do it with God’s grace, but preparation and training are important in ministry, just like in running.”

B. J. regularly keeps pace alongside new runners at their first races to offer pep talks and encouragement until the finish line. Shepherding his congregation, he provides similar accompaniment along the spiritual journey. Neither role was anything he had expected.

When life circumstances recently began shifting and the Fedscreek church grew in need of a shepherd, “My wife said, ‘Maybe God is telling you to be a pastor,’” B. J. recalls. “But I changed the subject. The last thing I wanted was to be the lead pastor of a church.” 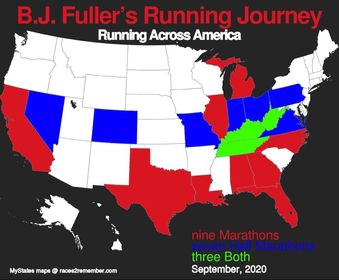 “My ultimate goal is to run a half and full marathon in every state.” —B. J. Fuller

During his time in the Leadership Focus ordination journey, which he finished this summer, B.J. participated in two retreats of solitude to center his mind on God. On the second retreat, without the distractions of Internet, phone, or TV, God got his attention. Suddenly, B. J.-the-banker felt “pulled by the ear” to discern the lead pastorate. He went for a run, called Rebecca once he had cell service, and prayed.

His wife was on board with the ministry opportunity, which was “round one” in B. J.’s mind. After more prayer, he decided to talk with two mentors about it. B. J. spoke to each of the older pastors separately, without telling them what was up. Each affirmed B. J., saying, “When you said you had to talk to me, I knew this was what it was about.” In late August 2020, B. J. was confirmed as lead pastor of Fedscreek.

Pastoring his home church with primarily older congregants during COVID-19 may not have been in B. J.’s initial plans, but he is embracing the challenge with God by his side. He and his congregation are staying connected with daily prayer meetings hosted on Facebook Live, and are helping in the community as much as possible.

“People have a tendency to be couch-potato Christians—we’re saved and go to church, but don’t want to do the work,” B. J. said, thinking back to his parallel of training runs. “But as a church and as a movement, we’re following the Great Commission. We have to be active. Just as I won’t stop running in a race until I finish it, as Hebrews 12:1–2 says, I won’t stop running the race God has set before me until I’m finished.” 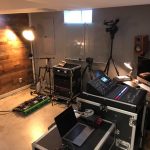