The Global Gathering May Change Your Life

By chogministries
Posted June 19, 2013
In All Church of God, Global Gathering, Global Strategy
The Global Gathering May Change Your Life2013-06-192013-06-19https://www.jesusisthesubject.org/wp-content/uploads/2016/07/ChogLogo-Light.svgChurch of God Ministrieshttps://www.jesusisthesubject.org/wp-content/uploads/2016/07/ChogLogo-Light.svg200px200px 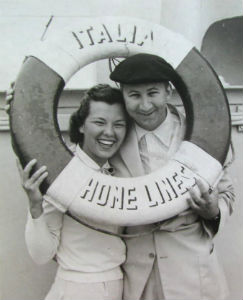 On Saturday, at 4:00 PM, June 4, 1955, Kitty and I were married in Maiden Lane Church of God, Springfield, Ohio. Rev. Dr. Harold W. Boyer officiated. Three weeks later, we sailed for Europe for seven weeks of adventure, one week crossing the Atlantic each way, five weeks by train and bus travel through countries that had suffered much during World War II.

Our trip was to attend the first World Conference of the Church of God, in Fritzlar, Germany, July 16–20, 1955, under the theme “One Lord, One Faith, One Task.” That trip helped shape the rest of our lives more than any other single event.

We became better acquainted with major leaders of the Church of God, who would become our dearest friends. It was a bonding time for friendships with Dr. John A. (Eunice) Morrison, president of Anderson College; Russell Olt, dean of Anderson College; Dr. Adam W. (Grace) Miller, Steele (Grace) Smith, John H. Kane, and Harold Phillips. T. Franklin (Gertie) Miller and Tom A. Smith were convention directors. 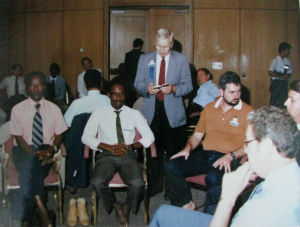 Beloved pastor Dr. W. Dale (Polly) Oldham, speaker on the Christian Brotherhood Hour broadcast, was one of the featured speakers. Kitty was a soloist for the conference. Herb Thompson was a music leader, with his wife Lola, an accomplished pianist. Herb was one of the outstanding song directors in the nation.

Norman Beard, of Ohio, was president of the church’s International Youth Fellowship. He later directed international studies, travel, and the acclaimed TRI-S program (“Student Summer Service”) at Anderson University. We still pack for trips with his tips in mind.

This trip set the pace for our life of world travel and many friends on every continent. Delegates came from Africa, Canada, Denmark, Egypt, England, Greece, India, Ireland, Italy, Lebanon, Japan, the Near East, United States, West Indies, and many other countries.

In 1959, the second world conference was held in Essen, Germany. Later it was in Nairobi, Kenya; Seoul, Korea; Wiesbaden, Germany; and other countries. The World Conference in Korea marked the first time for a footwashing service on a global scale. Kitty led the service for the women and I directed it for the men.

We can all look forward to the Global Gathering of the Church of God in Anderson, Indiana, June 22–25, 2013. Some of the church’s finest preachers, public speakers, national leaders, and top musicians from more than fifty nations will attend.

Kitty and I are definitely planning to be there. It can be a life-changing event for you just as the first one was for us. Our enthusiasm for such an event has not diminished. We led tour groups to those worldwide events. Tour guides not necessary for the trip to Anderson.

Plan for this historic event by making sure your pastor and family attend, your friends and all the leaders of your church. This kind of event can help transform your church and be an instrument of genuine revival.

We plan to see you there in the will of God. It seems good to me, and I am not even one hundred yet.