By chogministries
Posted May 14, 2018
In All Church of God, Central, Give Life
The Clerical Collar-Wearing Pastor Who Planted a Church at Age 772018-05-142018-05-14https://www.jesusisthesubject.org/wp-content/uploads/2016/07/ChogLogo-Light.svgChurch of God Ministrieshttps://www.jesusisthesubject.org/wp-content/uploads/2016/07/ChogLogo-Light.svg200px200px 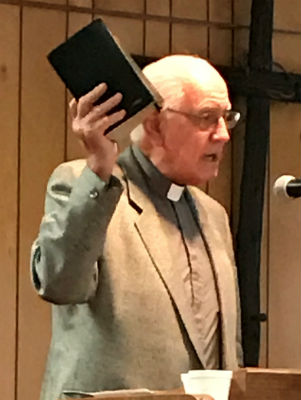 Dick Ogle’s preferred daily dress is clerical attire—characteristic among some denominations, but certainly not common in the Church of God. Funerals are one of his primary methods of outreach—unusual, but surprisingly potent. Perhaps the most unconventional thing about this eighty-eight-year-old pastor is that he came out of retirement at age seventy-seven to plant a church in Hoisington, Kansas. Today, First Street Church of God is a healthy, growing, multi-ethnic congregation that proclaims the gospel with boldness, and sings straight out of the hymnal.

He didn’t always wear a clerical collar. But an encounter with a Catholic priest was a light-bulb moment for Richard “Dick” Ogle. No, it wasn’t a theological revelation or a doctrinal epiphany. This was all about practicality. “Tell me why you Protestant ministers always keep it a secret that you’re in the ministry,” the priest said. Dick got to thinking about his construction business he’d formerly had. He wore a uniform, and even when he wasn’t on the job, passersby would remark, “I see you’re in construction.” It was always a conversation-starter. Sometimes there’d be an opportunity for work. Today people come up to him and say, “I notice you’re a minister.”

Dick tells a lighthearted story of an unintended perk of his clerical dress. One day he was at a restaurant and noticed he didn’t have the cash on him to pay for his meal. He asked the cashier if he could pay by check, as his address was local. Before the conversation could continue, someone behind him slipped a ten-dollar bill into his pocket, saying, “Use this for the Lord’s work.” Dick follows that story with, “I’ve worn clerical shirts ever since!” 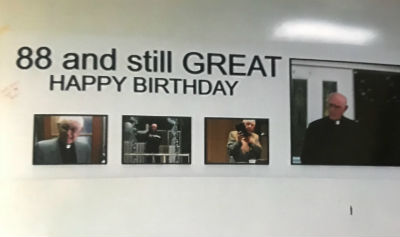 Dick retired at age seventy. He’d been a pastor early in his life, but he’d also worked a variety of jobs, including prison chaplaincy. After being asked to fill the pulpit one pivotal Sunday morning, he put his name out there for consideration among churches that were looking for a pastor. After meeting with a couple churches that “didn’t see him as the answer,”—possibly because of his age—Dick decided he’d plant a church. The conversation with his wife Jan went something like this: “Would you consider it a stupid idea to buy the abandoned Assembly of God church in Hoisington and see if we can pull some people together?” Her reply: “Well, whatever blows your hair back!”

Along with his wife and youngest daughter, Dick began knocking on doors, telling everybody he could that they were starting a new church. In the years since, the church has developed a reputation as a multi-ethnic congregation, with African Americans, Mexican Americans, and Native Americans adding a beautiful diversity to the Kansas congregation. Part of the growth, Dick explains, has been due to his funeral ministry. He loves to quip, “I’m a great believer in funerals!” And what he means is the chance to minister to families in their greatest time of need and spiritual openness. “Most pastors I talk to act like funerals are an imposition,” he explains. “But I do about thirty funerals a year, and they’re the greatest source I have for reaching into the community.” 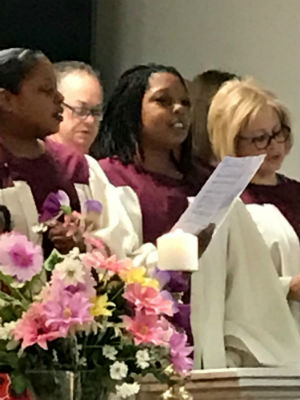 But Dick doesn’t just do give the eulogy and say a prayer. He really gets to know the family and the legacy of the deceased. He personalizes his message. He’s willing to accept the cases of suicide—the ones he says other ministers prefer to avoid. But he says the gratitude from the families is overwhelming, and he knows the extra steps are worth it.

Because of some investment income, Dick Ogle chooses not to receive a salary from the church. Instead he’s able to turn it back to the community and those in need. The debt for the church building, which he and his late wife Jan purchased with their own money, has since been repaid by the congregation. At his age, he finds it very helpful to have her daughter as a part of the ministry team at First Street Church. But also at his age, he’s discovered the joy of giving counsel and imparting wisdom to hearers who trust his time-tested experience and teaching.

Not surprisingly, at his age, he’s happier than ever. “I am so grateful that God called me to be a Church of God minister, and I am having the greatest time of ministry in my life!”

In Kansas, across North America, and around the world, God is on the move in the Church of God. Join the movement. Give life. Donate today at give.jesusisthesubject.org.