The ‘Art’ of Reconciliation: Church on the Street Gives Garbage a Second Chance

By chogministries
Posted July 9, 2015
In All Church of God, Southeast
The ‘Art’ of Reconciliation: Church on the Street Gives Garbage a Second Chance2015-07-092020-02-29https://www.jesusisthesubject.org/wp-content/uploads/2016/07/ChogLogo-Light.svgChurch of God Ministrieshttps://www.jesusisthesubject.org/wp-content/uploads/2016/07/ChogLogo-Light.svg200px200px 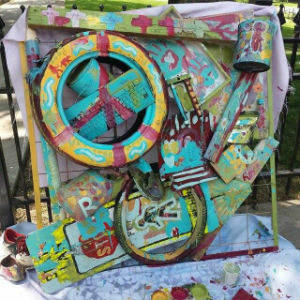 “One man’s trash is another man’s treasure,” or so the ancient saying goes. But realistically speaking, how often is trash literally collected, repurposed, and beautified into a stunning new creation? Meet “The Art of Reconciliation,” a new art project recently designed by the Church on the Street ministry based in Atlanta, Georgia.

Based on the recurring Biblical theme of reconciliation, this twelve-foot by twenty-foot mosaic features worthless, undesirable objects that have been repurposed and recreated to piece together an incredible sculpture. Though the project is still in its initial stages of creation, artists and fellow contributors have already completed the first two of several four-foot by four-foot panels, which eventually will be put together to construct the project’s pièce de résistance: the mosaic. 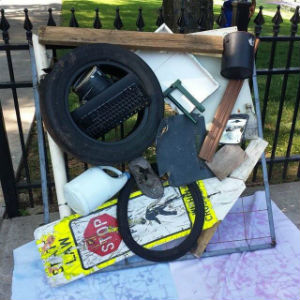 But why reconciliation? Considering the growing injustice and rejection of Christianity throughout the world today, why choose such a controversial topic for the focus of this project? Pastor Andy Odle, the executive director of Church on the Street, responded to these questions with his statement, “We believe that reconciliation is what God is up to right now in the world. God tells his people to be reconciled to him and to each other, and so we want to promote that message through this collaborative artwork that thousands of people will see every day.” 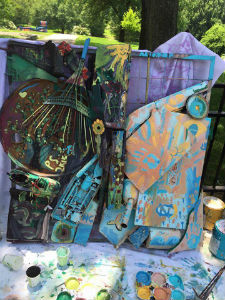 When asked about his philosophy behind “The Art of Reconciliation,” Pastor Odle dove straight to the heart of the project, describing the inspiration for its theme and the ways in which this particular mosaic symbolically represented reconciliation. “There’s a couple layers to ‘The Art of Reconciliation’ that we are focusing on. The first is that God takes what the world discards and he redeems it. Both symbolically and in actuality, we are repurposing and reconciling the trash we find to fulfill its potential and give it value. The second layer to this project involves us bringing people together from different areas to contribute. Reconciliation looks like many people putting together their gifts and abilities for one purpose, so we are bringing together more than five hundred people to work on ‘The Art of Reconciliation’ through two communities from Church on the Street.”

Through this beautiful and symbolic artwork, Church on the Street hopes to promote the message of reconciliation and the availability of new life in Christ to thousands of people in the Atlanta area. Taking what was once considered useless, broken, and undesirable, “The Art of Reconciliation” clearly displays the gospel message and tells a story of redemption and hope for all sinners, through the cleansing blood of Jesus’ sacrifice.

Now that is something worth treasuring.