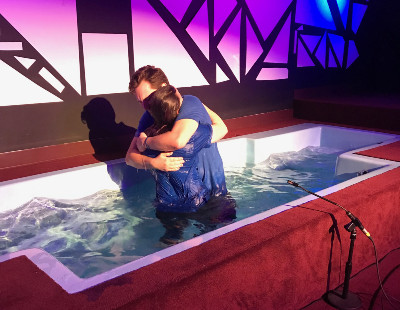 Nick and Sidney Truax embrace after he baptized her.

Young adults. Unplanned pregnancy. One, a wandering believer; the other, lost. The cards were certainly stacked against them. Nick and Sidney knew they had options—separation was on the table, and abortion wasn’t out of the question. A baby’s heartbeat, a wedding ceremony, a church that loved them, and a half-decade of patient prayer culminated this past fall when, accompanied by joyous applause, Nick performed the baptism of his own bride.

Nick Truax was raised in church and accepted Christ at age sixteen. He credits his youth pastor, Scott Compton—with whom he still speaks regularly—for forging a firm foundation of Christianity as more than a religion, an investment that would prove invaluable to his reconnection to Christ down the road. Nick’s college years were marked by what he describes as a “double life;” on the weekends his guitar skills took him to a variety of secular establishments, several not so helpful for his walk with the Lord but, come Sunday, he was back on the worship team, playing for God, sometimes hung over from the night before. “It was a dark period that, though I wish never happened, is very much a part of my story,” Nick explains. “That’s when Sidney and I got together.”

Sidney’s pregnancy served as a wake-up call. After about eight years of playing guitar for the church worship team, Nick stepped down, knowing little of what to do next, but realizing he couldn’t lead others in worship until he set things right. “After the baby came, I knew God still loved me and wanted me to play music for him, but I made the decision not to rejoin the team until Sidney and I were married.” The decision to marry didn’t come easily, though. There were several other decisions that had to be made, and each of them were fraught with some fear and trembling. 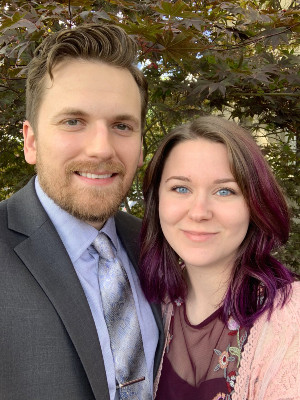 “In the beginning, Sidney and I didn’t know if we would end up staying together,” Nick recounts. “We knew that we were either going to be tied together for life or we had to think of something else. But I remember so vividly the first time we saw and heard the baby’s heart beating—we melted. I remember promising Sid’s mother that I was going to take care of this child and Sidney both somehow. I believe Sidney found comfort in that, as her mother did, even though I wasn’t sure how I could manage being a father. I still felt like a big kid inside. But Sidney made the agreement to stay with me, as well, and I believe God was glorified with those decisions…. Staying together meant we both had to make sacrifices, ultimately for each other. We both knew we couldn’t live for ourselves anymore. We had to become one.”

Dark skies began to clear for the couple as Nick switched jobs and muted the destructive voices around him. In October 2014, Nick and Sidney married and by Christmas, he was playing in the church band again. Though Sidney had committed her life to Nick, she wasn’t ready to commit her life to Christ. Sidney remembers mealtime prayers as a child, but church was not part of the experience. As a young married woman, Sidney often tagged along with Nick to church, but primarily for the social aspect. She didn’t know much about the Bible and recalls zoning out during sermons that were above her head or felt condemning. Nick provided a faithful witness, but didn’t want to push too hard. Pastor Nate and Liz Hultz entered their story almost two years ago, though, and a new wind began to blow. 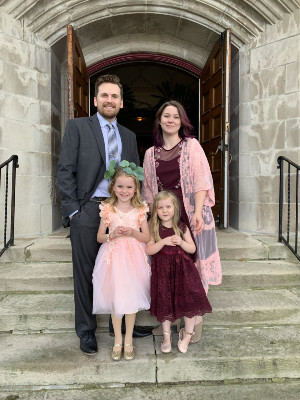 “Nate’s messages are very personable and spoken in layman’s terms so I could actually understand them,” Sidney explains. “I was getting challenged and having more and more questions. There were quite a few aha moments in there, too.” Sidney goes on to describe how important the ministry couple’s authenticity was to her warming up to faith. Meanwhile, Nick began to realize Sidney’s heart was opening to Christ, and his prayers grew all the more fervent.

“It wasn’t until after our second child when things really started to move in her faith,” he recalls. “Honestly, it wasn’t until I became the worship leader that she really started to ask questions to me about faith and show curiosity about church, in general…My faith had grown deeper than ever in those first months as worship leader and I believe she could see that…my prayer was that Christ would reveal himself to her, and if the opportunity arose for God to show me what to say to get through to her, I wanted to be the best influence I could be.”

The wall crumbled in 2019. No longer was there a separation between Jesus and Sidney, as she let her guard down and let Christ in. “I had started attending church every week instead of a couple times a month,” Sidney remembers. “I started wanting to be more involved. Nick became the worship leader and I got to watch his faith grow. We joined a missional community, and I spent more and more time with Christ-followers, and doing daily devotionals. I was doing all the ‘right things’ before I actually asked him to be my Savior. I realized it was time for me to ask because I knew I couldn’t have real change without him. I was and am still broken, but my daughters are my biggest motivation because they deserve the best mom they could ever ask for, and I couldn’t be that without Jesus. I’m glad because I want them to grow up knowing Jesus and knowing their worth. Plus, we can learn together, which I think is super cool! There have been quite a few things my oldest has even taught me.”

Last fall, Nick rejoiced to baptize Sidney in a celebration of salvation neither will ever forget. Nick considers it a personal taste of heaven. “It was one of the most emotional moments of my life, more so than even our wedding day,” he explains. “I wanted to share her courageousness with honor, and I wanted to give God the credit he deserves for molding her into the woman she’s become. He’s moved mountains in our marriage, and our story really goes against the odds in today’s world. Not only that, but having our daughters on stage with us was a precious seed in their faith. Ema got to see her mommy get baptized by her daddy, and she’s already asked us questions about what happened and why we were in that ‘big tub at church.’” 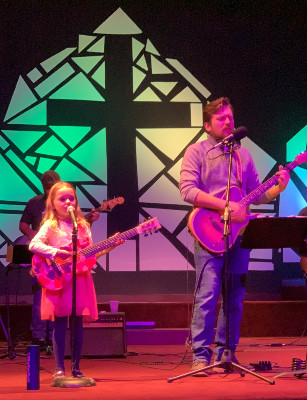 Ema joins her father for worship on “Children’s Sunday.”

Nate Hultz, pastor of the Church of God congregation in Ontario, Ohio, known as Avenue Church, couldn’t be more thrilled to have witnessed firsthand the transformation in both Nick and Sidney. “Nick was on the search committee to bring me in to the church,” Nate explains. “He was probably the youngest guy in the church at the time, so I connected with him immediately…. He was going to be, in my hopes, part of the revitalization the church needed to go through. But as I got to know Sidney, I realized she wasn’t really a Christian. After he became our worship leader, our families really started coming together. She started getting closer to my wife and more involved in church. One thing led to another, and she found Christ. In her quiet way, Sidney said, ‘I’m ready to take the plunge.’”

If Nick and Sidney could offer any advice from their experience, they would be blessed to elaborate. When it all boils down, Nick encourages couples also in the situation they were in initially to not jump the gun and end the marriage reactively. He says such a course of action would have left his own life in shambles, and he shudders to think about how lost he and Sidney might be today. Sidney adds of her experience with Jesus Christ, “While some people may be quick to jump all in, others need more time…. I know seeing Nick’s faith grow was a huge part of my growth, even if I didn’t understand it at the time. Don’t give up, keep loving, and lead by example.”