By chogministries
Posted September 18, 2014
In All Church of God
Taboo No More: Oregon Church Boldly Addresses AIDS2014-09-182014-09-18https://www.jesusisthesubject.org/wp-content/uploads/2016/07/ChogLogo-Light.svgChurch of God Ministrieshttps://www.jesusisthesubject.org/wp-content/uploads/2016/07/ChogLogo-Light.svg200px200px 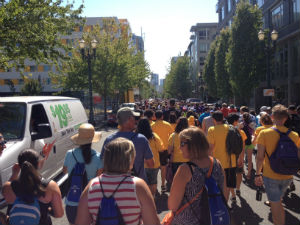 More than 2,500 miles from Hawaii, a suburban community of fifty thousand inhabitants welcomes visitors with a sign that reads “Aloha.” Though often overshadowed by its well-known neighbor (Portland), Aloha is a city not forgotten by God. Like many metropolitan centers pinched by economic collapse and divided by culture and ideology, Aloha and the Portland metro area are ripe for spiritual harvest. Fueled by mercy and a drive to live out the love of God, Aloha Church of God has dared to walk where many churches simply do not go.

“It was invigorating, and I felt like God was smiling on us.” Tim Irwin, pastor of Aloha Church of God, remembers the day in early September when church volunteers joined crowds crammed along city streets. “There is a camaraderie among such a diverse group of people all assembled for one thing and one thing only—to support a great cause,” Tim reflects. That great cause—the fight against AIDS—rallied individuals, businesses, clubs, medical centers, and a few churches for a cause historically ignored by the church, Tim explains. 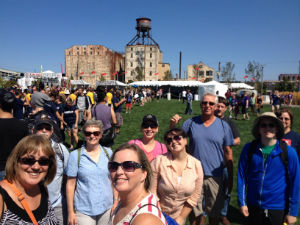 “For the most part, it was other people with AIDS, not us,” he says. “It was easy to view AIDS as a punishment by God for the sinful behavior of others. I believe that it is our duty to show mercy to a lovely group of people who have been well-loved by Christ but not traditionally well-loved by the church. If the church had responded to the AIDS epidemic of the 1980s with mercy instead of judgment, our image in the world would not be nearly as tarnished as it is. It’s never okay to withhold mercy.”

In 2012, Pastor Tim was preaching long and hard on the subjects of mission and vision. Taking a much-needed detour, his preaching journey led him to the Beatitudes in Matthew 5. When he came upon the seventh verse, the emphasis on mercy effectively broke his heart. How was Aloha Church of God truly living out what it meant to be merciful? That week, an advertisement for an AIDS benefit in Portland caught his eye. In just two years, they’ve raised $3,000 for AIDS prevention, research, and more. Aloha had chosen to walk their talk.

“Fighting an enemy such as AIDS suddenly doesn’t seem as daunting when you’re marching with ten thousand friends,” Tim reflects. “Instead of being huddled behind our home walls (or, in our case, our church walls) making excuses that the fight is too big for us, we each brought our small gifts and joined them together to make a significant impact in the fight against AIDS.” The fight isn’t too big for anyone when working together. Aloha Church of God sees about one hundred at worship on Sundays, yet they’re not letting their size or resources determine their kingdom impact.

“God has been speaking to my heart over the past few months,” Tim explains, “that I have to quit thinking of my congregation as the people who come to church on Sunday morning and start thinking of my congregation as all the people in our community for whom God has made us responsible. I walk in our community and I’m getting to know my neighbors by name. They know what I do, and when they need a pastor or a church, they are likely to turn to me.”

Learn more about what the Church of God is doing to change the world at www.JesusIsTheSubject.org.