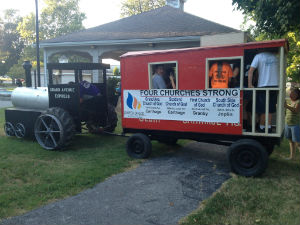 After attending the Church of God Convention in Oklahoma City in June, a group of leaders returned to their home congregation particularly inspired by the direction of the movement. The Holy Spirit has been leading Grand Avenue Church of God (Carthage, Missouri) to focus more on ministry outside of its four walls. At the convention, Jim Lyon’s telling of the story of the Shelter in Cuttack, India, captivated senior pastor Chuck Davis. When his turn came to host the fifth Sunday unity service for four area congregations in August, he boldly changed the format and focus to reflect a motivation to change the world—starting in their own backyard.

Unity services are designed to express and offer the experience of unity. Worshiping together, but especially working together for an important cause, only enhances that unity. “We’re trying to make a statement, not only to the Church of God, but also to the people outside the church,” Chuck explains. “When the unbelievers see us working together, it says that Jesus loves them. It says we’re a family that you can belong to. We’re something worth investing in because we have the love of Christ, which must be shared and not to be bottled up.” Chuck believes that Grand Avenue, as well as many other congregations, need an issue like fighting sex-trafficking that the body of Christ can rally around. 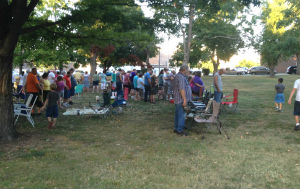 “The stories touched my heart, as well as the hearts of my wife, daughter, and others from my church,” Chuck recalls. “Hearing the stories from the Stripped Love ministry and the story of the Shelter led us to an answer to our question, How can we engage the church? We saw that here was something we could grab ahold of and do.”

The August gathering also brought together Grandby First Church of God (Grandby, Missouri), Scotland Church of God (Carthage, Missouri), Southside Church of God (Joplin, Missouri), and RFamily Church (Republic, Missouri). The service, which was moved to the fourth Sunday to avoid the busy Labor Day weekend, included a presentation by an officer from the Carthage police department. Chuck arranged for the officer to come and share about at-risk children in the community. This officer also made arrangements to return to Grand Avenue to go into more depth on the subject and help the community recognize warning signs of children caught in the sex trade. Inspired by the vision communicated by Jim Lyon at the convention, Chuck encouraged the congregations at the unity service to unite by supporting the church-wide effort to fight sex-trafficking—“1000 X 1000.”

Since the Church of God Convention, Chuck has continued to help his congregation reach out in new and practical ways. “Be Bold” was a confirmation for Chuck regarding the vision he already saw for the direction of his local congregation. “And that unity service was just an opportunity to take it from what’s going on within, and share it with Grandby, Southside, Scotland, and RFamily—in addition to the community within earshot,” he explains.

Granby Church of God pastor Ashley Edgemon faithfully attends the fifth Sunday unity services. He was especially moved by this one. “Since we’ve been doing these unity services,” Ashley explains, “this was the first time that we did an outdoor worship service.” He notes that the location of the event was also important. “It was held at Central Park, which happens to be almost at the center of the city of Carthage. Pastor Chuck’s idea with having the event there was to get outside of the church building and let the community know who we are and what we stand for. The people at the event followed Pastor Chuck’s instructions to turn outward toward the surrounding community, instead of the customary facing inward, during prayer.”

“We needed to bring ourselves to an awareness that we’re here for the community,” Chuck concludes. “So we prayed for the needs of the community—as opposed to ours.”

Learn more about “1000 X 1000” and the Church of God fight against sex-trafficking at www.JesusIsTheSubject.org/CHOG-TraffickLight.