By chogministries
Posted October 9, 2014
In All Church of God, CHOG TraffickLight
Student Crosses America on Bicycle to Fight Trafficking2014-10-092020-02-29https://www.jesusisthesubject.org/wp-content/uploads/2016/07/ChogLogo-Light.svgChurch of God Ministrieshttps://www.jesusisthesubject.org/wp-content/uploads/2016/07/ChogLogo-Light.svg200px200px 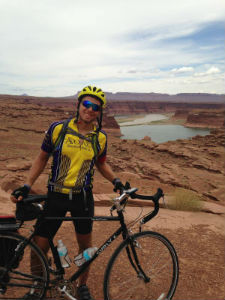 Photo: Ian Kallay pausing for a picture along his incredible journey.

First, tell us about yourself, like where you are from, what your major is, etc.

I am originally from Painesville, Ohio where I attended Riverside High School. Just after turning twenty years old, I received my undergraduate degree in marketing from Wright State’s Raj Soin College of Business. Currently, I am in the process of working towards my master’s in engineering innovation and entrepreneurship while working a graduate research assistantship at Wright State’s Research Institute. I am a member of Wright State’s cross country and track team, as well.

Tell us about your summer. It must have been a great adventure, and greatly satisfying.

This summer was unlike anything I can put into words. It began on June 23 and finished on July 29. My brother, Shane, drove along with me as my “support and gear” vehicle through the trip. The entire journey consisted of 37 days, 3,207 miles, and 9 different states. It was my desire to not only to raise money and awareness to combat human trafficking, but to inspire others to embrace their own fears that truly kept me going through difficulties that I have faced. On the trip, I endured 35 mile-per-hour head winds, 10,000-foot mountains, and 110-degree heat. However, I viewed myself as a symbol of those who had no voice; those who have been oppressed in the past, and I was not going to stop. My will was truly tested in Sacramento, California. We were only one day away from completing the journey when a tree branch flipped me over and “fractured” my hand, ceasing my ability to ride. At this point, we were 87 miles away from the finish and the only thing I could think about was “how can I finish?” I 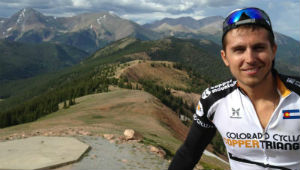 decided to run the rest of the way. And I did. It took me three days; in which I ran 41, 25, and 21 miles, respectively. The overall journey was beyond my wildest comprehension.

What sparked your interest in doing this?

A seed was planted when I was young. I read a book called “Be the Change” by Zach Hunter when I was only sixteen. He was fifteen when he wrote it. It showed me that you can make a difference regardless of your age. It also showed me that modern-day slavery still existed. I wanted to do something; something big, that would not only make people aware of what was going on, but that would inspire people to take action. I thought about my younger sisters being taken into slavery and being sold for sex, and knew that I could never bear to let that happen. So I looked within myself to see what I was passionate about; something that I would love to do seven days a week. For me, that has always been endurance events: running, biking, swimming, etc. And I decided to use this passion (in this case, biking) to raise awareness and money for this cause that God has led me to attack.

How can others help?

Others can join the movement by going to www.polaris.org, beginning and/or joining a “Be Free” chapter in their city, joining several other organizations that combat human trafficking throughout the U.S., or raising awareness in their own unique way. You can contact me at acrosstheunitedstates@gmail.com if you want to get involved.

What do you see for your future?

My bike trip across the United States has yielded an organization that is dedicated to helping others make a difference by showing them when, how, and where they can start. Through this organization, I will continue raising awareness for this cause by completing events that most humans would never dream of doing. Next summer, I (tentatively) plan to swim the entire length of the Ohio River. The summer after that I am planning an event that will be recognized nationally, in which I hope to raise more than $150,000 for organizations to help fight slavery.

Article courtesy WSU Athletic Media Relations. Used by permission. Donna Cox of OneHeart (Dayton, Ohio) and CHOG TraffickLight had the privilege of further inspiring Ian after having spoken to a group of students from Wright State and the University of Dayton on the subject of sex trafficking.

For more information about the Church of God effort to combat human trafficking, visit www.CHOGTraffickLight.org.