By chogministries
Posted February 15, 2013
In All Church of God, Colleges & Universities
Strege Writing Book on AU History2013-02-152013-02-15https://www.jesusisthesubject.org/wp-content/uploads/2016/07/ChogLogo-Light.svgChurch of God Ministrieshttps://www.jesusisthesubject.org/wp-content/uploads/2016/07/ChogLogo-Light.svg200px200px 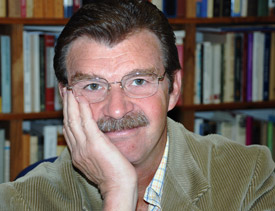 It can be a tough task to sit and interview Dr. Merle Strege and not get distracted as he sits behind his desk surrounded by fully stocked bookshelves. The collection fills up an entire wall and includes literature from many genres. In a little over two years, Strege, a professor of historical theology at Anderson University, will add another book of his collection. Currently in the writing process, his book about the history of Anderson University is scheduled to be released around Homecoming of 2016 — just in time for AU’s centennial.

By the time the centennial comes around, Strege will have participated in 40 percent of the history he writes about. He attended Anderson University as an undergraduate student from 1965-69 and completed a degree in the School of Theology in 1972. He started teaching at AU in 1980 and continues to this day. Along with his teaching, he serves as the official historian of Church of God Ministries, which has influenced him to write books in the past.

Despite all of his experience, Strege dove into the school’s archives and researched rigorously. However, this is not the first time he has written about the history of AU. For the past several years, every freshmen that has set foot on the campus has read Strege’s four essays about the history of AU. The essays were originally written for the alumni magazine but are now used in the Liberal Arts Seminar course.

Writing a book about an institution’s 100-year history can present challenges when finding a theme to connect chapters, but Strege has overcome the challenge. With seven chapters completed, which he says is about two-thirds of the finished product, Strege has decided to focus on the uniqueness of Anderson University and its values as an institution. In a sense, he is tackling the subject of what makes AU what it is today after 100 years.

His research has led him to some interesting discoveries, such as the way AU accepted African-American students and openly criticized the Ku Klux Klan. Located in a town with a high population of African-Americans, AU accepted blacks into the school after World War II — at a time when not all colleges were doing so. It is one case where AU has been in the national spotlight.

“What I’m trying to do with the book is tell the story of Anderson University as a church-related institution and the challenges and opportunities that come along with that,” Strege said. “I really think that some of the specific theological commitments of the Church of God have made it possible for Anderson to be rather unique among church-related or Christian colleges.”

Strege has also learned that prominent American figures, such as Eleanor Roosevelt and William Jennings Bryant, spent a day on the Anderson University campus. Strege is now working to weave all these stories into one narrative.

Tom Bruce, executive director for advancement at Anderson University, said there is no set date for the release of the book, but it will be around Homecoming 2016. Bruce also said there will most likely be a special roll-out and signing event with Strege.

“I know that Dr. Strege is crafting an insightful work that will tell the story of Anderson University,” said Bruce. “We all look forward to his piece.”