Story in Song: Ten Churches Unite to Worship the Lord, Celebrate Our Heritage

By chogministries
Posted November 17, 2017
In All Church of God, Southeast
Story in Song: Ten Churches Unite to Worship the Lord, Celebrate Our Heritage2017-11-172017-11-17https://www.jesusisthesubject.org/wp-content/uploads/2016/07/ChogLogo-Light.svgChurch of God Ministrieshttps://www.jesusisthesubject.org/wp-content/uploads/2016/07/ChogLogo-Light.svg200px200px

Our story, God’s story. The message of the Church of God movement lives on in large part because of pioneer men and women who not only lived it, but tied it to that which speaks to both soul and mind—music. It has been said that the Church of God is a singing church, and after Christ alone, it has been our songs that have brought our common experiences together in beautiful harmony. When voices ring out that there is joy in the Lord, we know it to be true. When we sing of the kingdom of peace reigning within, that’s our story! When the familiar refrain, “I am a child of God” is heard, Church of God people from New York to Los Angeles and everywhere in between resonate that glorious truth. It should come as no surprise then, when word got out that Stanton First Church of God in Stanton, Kentucky, would host a heritage hymn sing-along, Church of God people from ten congregations showed up—and a bit of heaven came down. 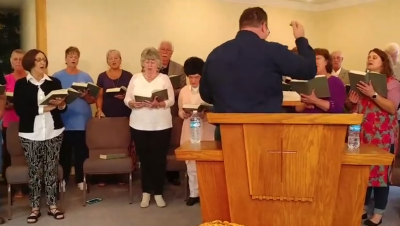 Pastor Ben rehearsing with the choir.

Pastor Ben Liston and worship pastor Brandon Pelfrey were the brains behind the evening. “You just had to be there,” they exclaim. “There’s really no way to describe what happened that night. The video doesn’t even do justice to the emotions and spirit we had that night. There were people that sang every single word by heart. Some just sat and listened, soaking it all in. One couple just sat there praising the Lord and crying through the entire thing.” 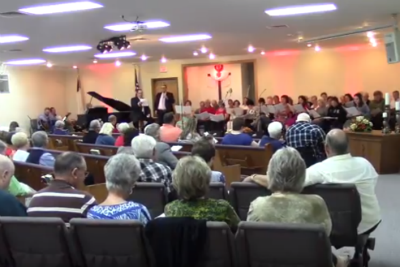 “This night was not about promoting the ongoing ‘worship wars’ that has crept into churches,” Brandon explains. “I believe with any business or organization, including the church, it’s important to know your history and the vision cast by the founders. It’s hard to appreciate where you are if you don’t know where you came from. This night was about coming together and singing the songs written by our pioneers that tell our story.”

In Kentucky, across North America, and around the world, God is on the move in the Church of God. Join the movement. Reach our world. Donate today at give.jesusisthesubject.org.