Still in God’s Grip: The Church of God and the 1918 Influenza

It was known as “the grippe.” The 1918 influenza grabbed people physically. It seized them with respiratory distress, fever, and cough. Starting in January 1918 and lasting until December 1920, roughly 500 million people worldwide were caught in its grasp. Those dying from this virus made it one of the “deadliest epidemics in human history.”

The Church of God reformation movement was not immune to this pandemic. Across the church, many people were bedridden and also near death from the influenza’s effect. The Gospel Trumpet Company, too, felt the grippe’s forces. In one week during November 1918, worker infections jumped from fourteen cases to twenty-five. By February 1919, the board of directors considered a relief program to “care for workers in time of sickness and need.”

The Gospel Trumpet Company was the forerunner of today’s Church of God Ministries. In 1918, the Company managed the national camp meeting (the current regional meetings and biennial convention) and distributed Sunday school materials (today’s Christian education resources). It operated the Anderson Bible Training School (now Anderson University), reported to the ministerial assembly (now the General Assembly), and directed an Old People’s Home for aged church workers. It also printed thousands of books for both children and adults, and published a weekly newspaper called The Gospel Trumpet. This division today is known as Warner Press.

The Gospel Trumpet newspaper, circulating across the world, began reporting on the grippe in July 1918. It wrote of the influenza weekly from October 1918 until late 1919. The editors offered world news involving this influenza and its progress in the column, “Observations of our Times.” It not only reported about the spread of the virus, but also how the Church of God was responding to this epidemic.

Churches and evangelistic meetings were closed across the country. People were quarantined with a congregation in Kingston, Jamaica, sharing that all in the fellowship were down with the influenza. Sadly, thirty-two-year-old Mrs. Dora Kline of Sturgis, Michigan, was the first reported as dying from the flu “after only a few days.”

While Church of God pastors found the times difficult, they believed God would provide for them and their congregations. These pastors wrote of sharing the gospel when possible and ministering in ways available to them during this life-altering event. The Trumpet editors printed stories offering perseverance, optimism, and hope to the movement.

Letters to the editor carried advice and invitation, as well. One reminded pastors they needed to manage self-care during the pandemic while others encouraged prayer and fasting during the grippe’s swell. An anonymous reader grasped it was a time of financial crisis for the church, but also for individual pastoral families. It must be remembered that, in 1918, few pastors received a weekly salary. Thus, this reader exhorted, “do not forget them…the past condition has revealed, more than ever, the need for supporting ministry in a regular systematic way.” Tithing, as we know it today, was not systematic for most congregations in the Church of God.

A highlight streaming from all these editions were testimonies of healing. Readers shared their personal experiences of being “healed from influenza” that had taken them to health’s darkest state. Such was the case with the future historian and editor of The Gospel Trumpet, Charles (C. E.) Brown, “who was afflicted with influenza and given up to die. Very near death, he was then anointed, and prayed for, and God healed.” Again and again, week after week, these affirmations of God’s work in the lives of family members and individuals brought encouragement to thousands. The Gospel Trumpet Company of 1918, and the Church of God it represented, did not submit to fear but found that God was still sovereign and present in the lives of his children.

The Deuteronomist’s often-repeated tag placed on Moses’s lips was to remember. In our own uncharted COVID-19 event, we do not need to fear, but remember that God was, is, and will be faithful. We are in his grip; we are in his tight hold. The Church of God one hundred years ago experienced it. We can walk along with them in our own moment and, in time, remember blessings unimagined.

Note: Quoted materials are from the CDC on the 1918 influenza, 1918 Gospel Trumpet Board of Directors’ Minutes, and Gospel Trumpet editions from July 1918 through October 1919. 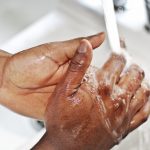 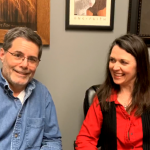