At Convention 2019 in Orlando, the torch of General Assembly leadership was passed from the late, great Rev. Dr. Diana Swoope to Bishop Timothy Clarke. As preparations are made for another smooth handoff to Rev. Dr. Esther Cottrell as she assumes the role of chair, the Church of God would be remiss not to thank God for the steady hands of one man so dedicated to Christ and the kingdom, whose resilient leadership helped the movement navigate the numerous turbulent trials and tragedies of the past few years.

The pandemic. Racial tension. Societal injustice and political division. Division among God’s people. During Bishop Clarke’s term as General Assembly chair, the Church of God movement wasn’t immune to the fear, volatility, and paradigm shifts affecting the culture. Exacerbating the challenge for local churches, state and regional assemblies, and U.S. and Canada leadership was the expectation that Christian leaders would continue to offer hope to the hopeless, solutions for society’s squabbles, and essential ministry under scaled-back and under-resourced conditions. 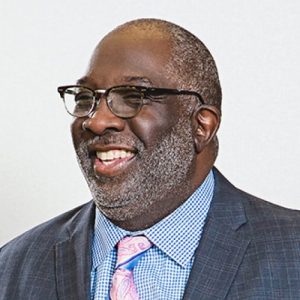 “You had a physiological impact because of the pandemic,” Clarke notes, “but then you also had the sociological upheaval with the murders of George Floyd, Breonna Taylor, and Ahmed Arbery, for instance, as well as the visceral reaction to the election. These were challenging times for the culture and the church. What helped steady my hands were my convictions about the church as a whole—the body of Christ, not just the movement—what our role is, our calling, and the difference we can make. Amid all the attacks, the criticism, and the resistance, it was the vision of the church that sustained me. It has been said in the Church of God, ‘I saw the Church.’ Once you do, that changes everything.”

Bishop Clarke has certainly enjoyed working with Jim Lyon, general director of Church of God Ministries, to lead the movement through the uncertain times of his own term, as well as pursue the goals of the General Assembly.

“I have said this before, but Jim Lyon is brilliant,” Clarke insists. “He’s a strategic thinker and a tactical master. He thinks long-term and he’s able to hold competing ideas in congruency. I’ve enjoyed that. He and I have had our disagreements, but we’ve been able to present a united front. I’ve always sought to honor him, and he has returned the favor. We’ve both understood our positions and the uniqueness of our dance that has to be choreographed between him, the General Assembly, the Executive Committee, and the Ministries Council.”

Spectators and critics comfortably standing on the sidelines can’t understand the complexities of the desk behind which they don’t sit. Even Bishop Clarke recognizes the depth of responsibility and degree of difficulty inherent in the position of General Assembly chair that one cannot grasp at a distance.

To the question of what he did not fully realize “on the sidelines,” Clarke responds, “How much your words matter.” He elaborates, “Because what the chair says is felt and heard throughout the movement, reverberating in ways that can be for good or ill. People do want to hear what leadership says…. I think real leadership, though, isn’t taking a sample opinion or seeing which way the wind is blowing, but leadership is charting a course; it takes courage and conviction to do that because sometimes the course is not what others would take.” 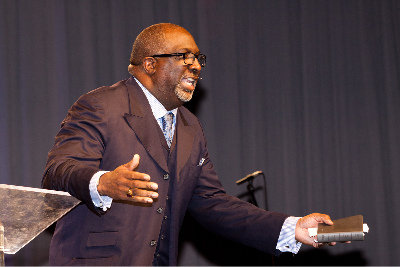 Even as the Church of God movement has been blessed to learn and grow under the teaching, preaching, and guidance of Bishop Clarke—before and after his term as General Assembly chair—he has acknowledged learning at the feet of Jesus through it all. Particularly during his leadership role in the General Assembly, Clarke says he has learned to love his brothers and sisters in Christ at a deeper level. Certainly there have been disappointments, but he loves the Church of God and desires only the best.

Perhaps that’s why he’s delighted to extend his blessing toward Esther Cottrell as she prepares to receive the baton from him on July 1.

“I think of the passage in the book of Esther, when Mordecai says of Esther’s position being ‘for such a time as this,’” Clarke reflects of the incoming GA chair with the same name. “Dr. Esther Cottrell is in the right place at the right time. I think she’s the leader the Church of God needs right now, especially following my late sister Dr. Swoope. Dr. Cottrell is a wonderful woman, I love and respect her, and I’m excited that she’ll succeed me.”

Numerous individuals have been Bishop Clarke’s Aaron and Hur in the heat of the battle (Exodus 17:12), offering vital support and encouragement. Each member of the Ministries Council and Executive Committee has won the heart of Timothy Clarke, but he’s especially thankful for the secretary of the Ministries Council, Vincent Miller (also pastor of First Church of God in Tampa, Florida), who would call Clarke at least once a week to check in and offer prayer. “I cannot tell you what that has meant to me,” Bishop Clarke reflects. 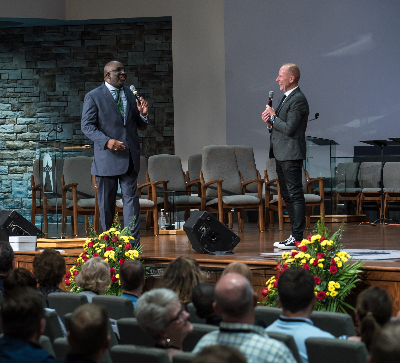 Considering his legacy as chair of the General Assembly, Bishop Timothy Clarke says, “I thank God we were able to lead the church during and through the pandemic and upheaval of our society; to be able to hand this off to Dr. Cottrell, a movement that’s healthy and vibrant financially, coming through so much uncertainty.” He adds that he would want to be remembered as “one who deeply loved the church and who sought to lead with integrity, leaving it better than he found it.”

May Bishop Timothy Clarke’s ongoing prayer for the Church of God Movement be ours, too: “I pray that this movement would live out what we’ve said and sung over the years. I have grown up in the Church of God—I’m in deep. My children and grandchildren, this is all they know. I’ve had other options and offers. But I’ve stayed because I believe in this Movement. I pray that we wouldn’t just give lip service to what we believe, but that we would truly live it out—that our work and words would become incarnational.” 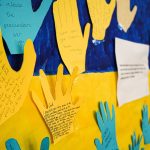 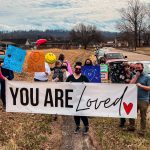 Kingsport’s Past Makes a Difference for the FutureAll Church of God, CHOG, Southeast