Southern CA Church Restarts as Oasis in the Desert

By chogministries
Posted August 9, 2017
In All Church of God, Western
Southern CA Church Restarts as Oasis in the Desert2017-08-092017-08-09https://www.jesusisthesubject.org/wp-content/uploads/2016/07/ChogLogo-Light.svgChurch of God Ministrieshttps://www.jesusisthesubject.org/wp-content/uploads/2016/07/ChogLogo-Light.svg200px200px 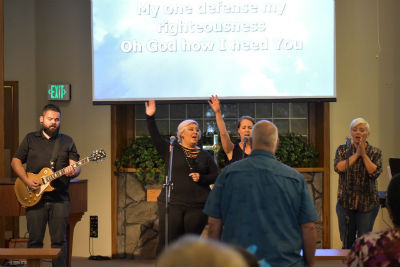 The church’s worship team went from a pianist only, to a full band!

Drought was setting at the church which had once been home to several high-caliber leaders, such as Herschel Rice and Dean Schield. Numbers had dwindled to thirty on a good Sunday, and a clear vision for the future didn’t exist. New direction was needed to make Oak Park Community Church of Claremont, California (formerly First Church, Pomona) the beacon of hope it once was. Under the pastoral leadership of Jeff Combs, could the congregation again become a wellspring of Living Water? Signs of life in the desert suggest an Oasis is on the horizon.

From the time Jeff and Kim arrived at the church in October 2015, there was no lack of prayer. They heartily encouraged the congregation to earnestly seek God in personal and corporate times of prayer for direction and renewal. To this day, the prayer team that they formed early in the process continues to meet every Tuesday morning at 10:00. Jeff emphasized the need for prayer in his sermons, and credits the present turnaround to prayer. “As I sought godly counsel from various sources, each person told me that the most important thing we had to do for success was pray.” Instead of trying harder, or seeking first the latest advice from church growth experts, Jeff and Kim led their congregation to seek the face of the Lord above all else. It seems to be making a difference. 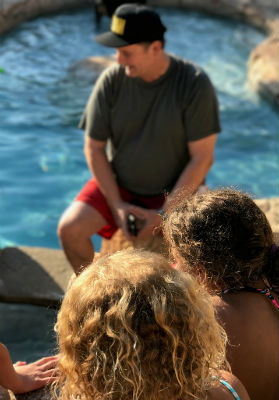 After a brief downturn in attendance when changes were first laid out, the church is celebrating numbers in the forties. And while numbers aren’t everything, they can indicate a transformation taking place in the hearts of the congregation. As Oak Park Community Church gears up for a restart under the name Oasis Church of God in Rancho Cucamonga in January 2018, the excitement and involvement of the congregation demonstrates just that. “They love God and each other,” Jeff explains. “They have been willing to put their money where their mouth is because they are committed to the work and what lies ahead. They are excited about the changes.”

The vision of the church is really quite simple. They want to be a church where people encounter Jesus through worship, relationships, prayer, and teaching. Sure, there are a variety of specific ways the vision will manifest, but the gist is Jesus. After the Samaritan woman encountered Jesus at the well, she was never the same. Jeff wants to see the church become that well, that oasis. “I was praying for clarity on what it would look like for Oak Park Community Church going forward,” Jeff recounts. “One morning, I woke up and couldn’t get the word oasis out of my head. No dreams, just the word oasis. So, I went to the church that morning and wrote the letters out and worked on an acronym that described what we needed to do: OPCCG (Oak Park Community Church of God) sold and new location purchased; Allow others to help us by forming a launch team; Select vision statement, core values, and ministry teams; Invest in the vision; and Start a new work. I then presented this to the entire church and they voted unanimously to move ahead with the plan.” Now the church’s mission statement is “Leading others to the Living Water!”

Restarts aren’t for the faint of heart. The legwork can be daunting, whether communicating change effectively, finding or reallocating investments and resources, or navigating fluctuation in attendance and volunteers. But consistent and devoted times of prayer kept Jeff and his growing leadership team focused away from the distractions and on the subject. After all, Jesus is the only real thirst-quencher! For the parched soul, the weary-worn traveler, and desperately searching—this Oasis in the desert is no mirage.

In southern California, across the United States, and around the world, God is on the move in the Church of God. Join the movement. Reach our world. Donate today at give.jesusisthesubject.org.