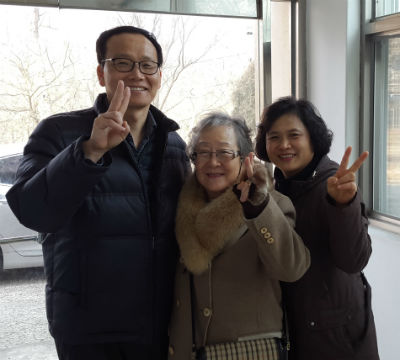 Photo: Pastor Moon and his wife with Bokja Lee (center).

If you’ve ever stood in need of knee surgery, you know the kind of pain she was in. She’d saved approximately $17,000 (US) and used it all. Every last penny. Today she’s still in tremendous pain, but not because the surgery was unsuccessful or because she’s on a long road to recovery. She decided to forego the operation, but not because it was too risky or because she got cold feet. Instead of using the money for herself, she was impressed by the Spirit to give it all away. Bokja Lee chose to support a building project in the Philippines over paying for knee surgery, and she puts up with the constant reminder every day. This is the story of her radical generosity.

In 2015, Pastor Moon of Mokopo Soonsung Church in South Korea traveled to the Philippines after asking Don and Caroline Armstrong, regional coordinators for Global Strategy to Asia and the Pacific, where a church needed to be built. Just outside Manila, the two discussed the great need for a church building to be constructed for Payatas Church of God. Pastor Moon, also the chairman of the Church of God in Korea, was so moved by the need that he brought it to the local church he serves. That’s when God began nudging Sister Lee to do something both selfless and sacrificial.

“She felt the Spirit convicting her of the money that she had been saving to have knee surgery,” Don Armstrong explains. “So, after a lot of prayer and conversations with her pastor, she chose to use her surgery money to build this church building. With her donation, Mokopo Soonsung Church was able to build the church in Philippines, and use additional funds to build a church in India, as well.”

Sister Lee uses a crutch today to get around until she can again save the money for surgery, but she couldn’t be more blessed. Her act of generosity has left a legacy of love that will translate to life change for untold numbers of souls.

“When Pastor Moon told me about this donation, I was humbled by her generosity and vision for a church that she hadn’t even seen in the Philippines,” Don reflects. “What impresses me is that she felt moved by the Spirit to do this, she acted on it, and now this church building will be finished as soon as the local congregation raises their share of the costs.”

Sister Lee is a great example for all of us on listening to the Spirit and then following through. Don writes, “Projects through Church of God missions have built churches around the world. Helping our brother and sister congregations build their church homes is a great honor and can give those Christians great encouragement to then build more churches with funds that they then raise themselves. It is extremely beneficial that we encourage congregations by helping them with some of the construction costs of their buildings. Like this church in the Philippines, the amount that was given was not 100 percent, but it does give the local congregation a good start to help them raise the rest of the building costs.”

Such a model has proved successful not only in the Philippines, but also Tanzania, Bangladesh, and India. Now sights are set on implementing the strategy in the Church of God in Myanmar and Sri Lanka.

The building in the Philippines is expected to be completed this August.

YOU can be a part of what God is doing in the Asia-Pacific region of the world. Donate online under “Mission—Asia-Pacific” at http://chogglobal.org/giving-opportunities-asia-pacific/. Or, mail your donation to Church of God Ministries, PO Box 2420, Anderson, IN 46018. Be sure to write Project 42.30992 on the memo line. Learn more about Global Strategy at www.chogglobal.org.