It all started with an intriguing post on Facebook a few years ago. Carl Urion, as part of an online course he’d enrolled in at Rocky Mountain College in Calgary, Alberta, had taken an in-depth look at the history of the Church of God. In so doing, recollections and realizations came to light that his daughter Julie Benson believed might be of interest to members of a social media discussion group dedicated to early Church of God hymns. While much of the genre of Church of God heritage hymns has often been limited by the parameters of publishing date and agency (i.e., the Gospel Trumpet Company/Warner Press), records indicate several songwriters—and therefore, the songs they wrote—find origin in the minds of ministers and musicians of the Movement, with widespread use and influence within the Church of God and across the denominational landscape. As the Facebook post illustrated, few remember the Church of God connection to John B. F. Wright and G. E. Wright, for instance, from whose pens came “Precious Memories” and “When the Savior Reached Down for Me,” respectively.

While an extensive examination of the history of these “other” Wright Brothers (whose broadly published songs certainly soared above scores of other songwriters’ submissions) goes beyond the scope of this article, the undeniable connection they have to the Church of God warrants further exploration. In part, Carl Urion’s post on Facebook (via Julie Benson) said the following: 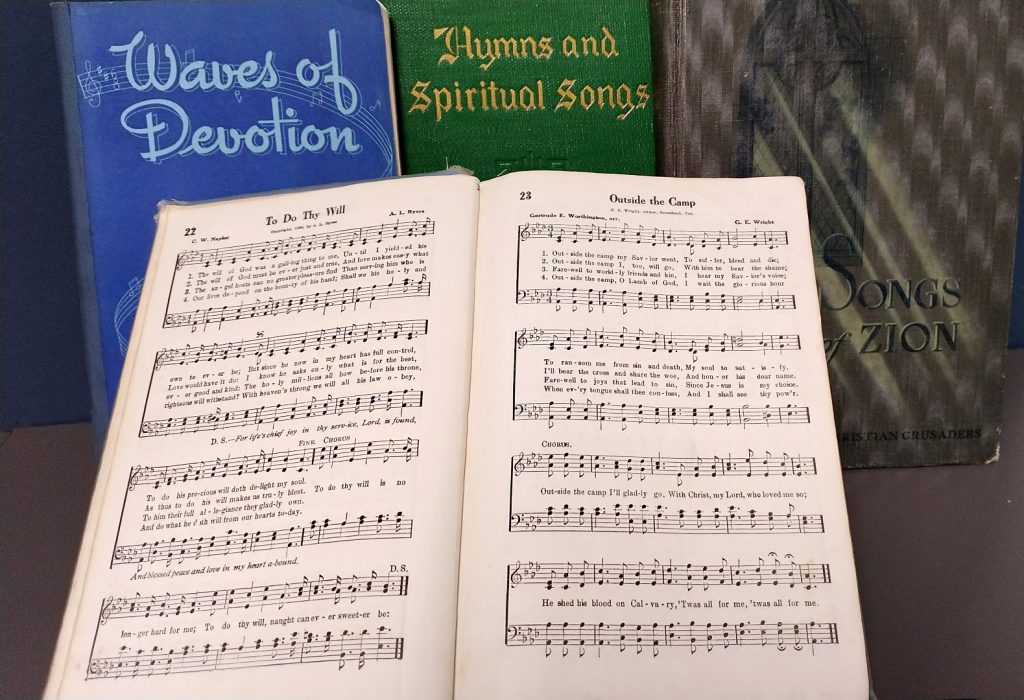 “Two of the best known southern gospel songs of the 20th century are Church of God songs that were shared with the whole world. They were written by two brothers who were longtime Church of God men in Limestone County, Texas, George (G. E.) Wright and his brother John B. F. Wright…. G. E. was a friend of my parents. He’d been well known in the Movement since the early 1900s as a pioneer evangelist. In the 1950s, even though he was in his 80s, he held meetings and briefly pastored in Wyoming. I was in junior high there at the time. Fairly often when he was preaching, he’d break out and, with great conviction, sing one of his songs a cappella while striding back and forth across the platform. The Gospel Trumpet Company had published an entire book of his songs at one time, including the one that’s so widely known, “When the Savior Reached Down for Me.” When Brother Wright stayed at our house, he used to talk with me about writing gospel songs. He told me that his brother John had a real gift, and that the two of them often worked out songs together. He said that John’s best known song, ‘Precious Memories,’ was written out of the depths of despair and grief at the passing of John’s young son. Both of those songs have been recorded by so many major recording artists [and] are part of the ‘great American songbook,’ almost like folk songs.”

Carl Urion is a retired professor in Canada, but also the son of a Church of God preacher. His wife has also been involved in the music ministry at First Church of God in Edmonton. Over the years, Carl’s disdain for division and his support for unity in God’s church has led him to keenly appreciate the ecumenical reach of the Wright brothers, whose personal influence (especially G. E.) on his life made such a remarkable impact on his youth.

“I was thinking of how G. E. and J.B.F. Wright were ahead of the Movement in their ecumenism,” Carl explains. “They literally grew up with the Movement beginning in the 1880s, yet they couldn’t wait for the Movement to become involved formally with Christians in other denominations. Through music they were wholeheartedly committed to the daily practice of interdenominational Christian unity during a time when the Church of God struggled with the insularity that was the practical consequence of its prophetic ecclesiology. I knew the brothers weren’t alone: thousands of people in the Movement between 1900 and 1940 may have been ‘come-outers’ but they were committed, as well, to widely ecumenical Christian movements in which denominational affiliation wasn’t an issue.”

Carl has long wondered why the Wright brothers haven’t had much “press” in the songwriting history of the Church of God, especially considering the impact of their two well-known works. Part of the issue, he concedes, is that the two well-known works may have been their only big hits that transcended time and space. After all, much of their songwriting gained geographically regional traction, largely in the very specific southern gospel and convention-style singing fields, and not always published by the Gospel Trumpet Company.

“Though G. E. published some songs with the Gospel Trumpet,” Carl explains, “most of the brothers’ songs were pitched to audiences outside the Movement. Their audience was primarily in a popular American singing movement that transcended denominational organization, while the songs we recognize now as heritage Church of God songs were marketed primarily to people who were already associated with the Movement.” 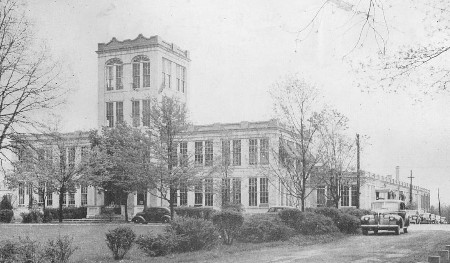 The Gospel Trumpet building in Anderson, circa 1911.

Carl offers further speculation about the possible narrower market for the Wright brothers’ material. “[It] might be a matter of aesthetics,” he says. “Maybe the reason that so little else of the Wright brothers’ song corpus is known in wider Movement circles is because of different musical tastes. Preaching and singing styles were regionally different and the Wrights’ popularity in the South and West may be evidence that their music might have been thought to be too parochial or homespun for other regions in the Movement.”

Thus, much of their music became popular regionally and outside of the Church of God, somewhat overlooked by contemporaries and historians alike. A generation of modern-day fans of southern gospel, Black gospel, country, and other genres of music grew up appreciating the contributions of G. E. and J. B. F. Wright—apparently without appreciating the contributions of the Church of God on the writers’ lives. 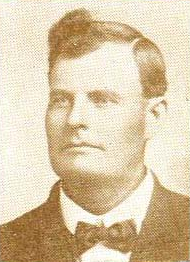 “The people in the early Movement were a diverse group who celebrated freedom from creeds,” Carl continues, “but in that area of productive tension between Spirit-inspired unity and freedom from credal uniformity, the only voice that codified the unity of the Movement was that of the editor of the Gospel Trumpet, supported by a relatively small interlocking management network. The Movement needed distinctive songs for its distinctive message and, between the 1880s and the 1930s, those distinctive songs were created within that small circle of workers by a smaller cadre of prolific songwriters. Effectively all the early songwriters who contributed significantly to the distinctive Church of God corpus of songs were closely associated with the central administrative and communications networks of the Movement. Most of them were physically located with the press as it moved between Ohio, Michigan, West Virginia, and Indiana.”

Another example of the exception to the rule, so to speak, was H. C. Clausen, whose songs “A Living Sacrifice” and “He Wants His Way in Thee” became staples in local Church of God congregations. He’d ministered as a regional musician and songwriter until his relocation to Anderson, where his work was embraced and disseminated.

G. E. Wright was submitting songs to southern presses in the 1920s at the same time he was pitching music to the Gospel Trumpet Company. John B. F. Wright’s musical training as part of an eighteen-day singing school in Texas surely shaped his leaning toward these ecumenical outlets for his creative energies. Thus, Stamps-Baxter today owns the copyright to “Precious Memories” and not the Gospel Trumpet Company. On the other hand, perhaps the exceptional reach of such an incredibly powerful song can be attributed to just the way things unfolded.

And, though there are exceptions, like “Joy Unspeakable,” “I Know My Name is There,” “It is Truly Wonderful,” among others, Carl Urion explains that “few of the Reformation Movement’s distinctive heritage songs have been adopted by other groups. The early Church of God is said to have sung its theology. Many of the Movement’s new songs, created primarily between the 1880s and the 1920s, were calls to come out from denominationalism. (For example, a beautiful song like ‘The Bond of Perfectness’ proclaims unity, but against the background of the Movement’s evening light theology it can also be heard as exclusionary. It might be hard to market songs to an audience identified in the Movement’s theology as Babylon.) As well as being professions of freedom from sectarian divisions, the distinctively Church of God heritage songs were proclamations of the perfection of a prophetic church and calls to holiness. Some of those songs are truly great, but sadly It may be that up until the 1920s the Movement’s song repertoire instantiated the way in which the call to Christian unity resulted in fact in insularity. The sea change in that orientation in the Movement’s music seems to have begun in the 1930s and to have accelerated in the 1940s. The brothers may have anticipated that process in the 1920s.”

Carl Urion never had the pleasure of meeting John B.F. Wright, but learned about the man from G. E., mostly from a single encounter in 1954. Sheridan, Wyoming, was the setting, as Carl’s parents were serving as self-supporting interim pastors there. Carl describes the scene.

“Traveling ministers and missionaries often stayed in each other’s homes, and we were on that circuit; the bonds amongst them were often as strong as family bonds. Both Dad and G. E. felt that God was leading G. E. to hold a revival meeting in Sheridan in the spring of 1954. The little congregation sacrificed to send him money for bus fare from central Texas to northern Wyoming. At age 79, bent with arthritis, G. E. traveled night and day, Monday to Wednesday morning, at a time when bus travel was even more challenging than it is today.”

“His enthusiasm in both singing and preaching was unconstrained,” Carl remembers. “…I’ve wondered how he had the patience, while at our house, to talk with the thirteen-year-old boy that I was then. He found an attentive, if sometimes skeptical, listener in me…. When he told me that his brother John had written ‘Precious Memories,’ and that they had worked on it together, he could probably tell that I thought he was either lying or delusional. But when he told me of the circumstance under which his brother wrote it…I realized he was telling the truth.”

A quick survey of two prominent pioneer Church of God songbooks reveals a few—and certainly not all—of the other songs written by G. E. Wright and published for congregational worship. In the 1926 Melodies of Zion songbook, the Gospel Trumpet published “Jesus is My Sunlight” and “Outside the Camp,” each written by G. E. Wright. In Songs of Zion (1940, Gospel Trumpet Company), G. E.’s song “Out Beyond Life’s Fading Sun” was included in the collection of numerous standards.

For a brief overview of Church of God history, visit www.jesusisthesubject.org/our-history. For a deeper dive into the early days and to connect with others who share an enthusiasm for the heritage of the Church of God, follow the Church of God Historical Society on Facebook at https://www.facebook.com/CHOGhistory. 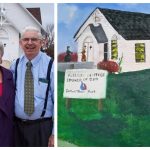 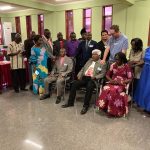