Should Women Be Pastors? Church of God Says Yes 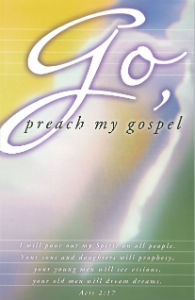 Does God call women to serve as pastors and evangelists? The Church of God movement and other Wesleyan groups say a resounding Yes! However, some newcomers to the Church of God question this position, so Warner Press provides several resources to address the issue with biblical and historical integrity.

This summer, the publishing house is rereleasing the booklet Go, Preach My Gospel, by Jeannette Flynn and David M. Scholer. In the first half of this publication, Flynn cites leading Church of God biblical scholars and theologians who address the issue of women in ordained ministry. In the second half, the late Professor Scholer of Fuller Theological Seminary shows “with clarity and conviction the biblical basis for the full participation of women in the ministries of the church.”

Warner Press is also releasing on DVD a fourteen-minute video by the same title. It highlights well-known women ministers of the movement’s past, such as Mary Cole and Lena Shoffner, and interviews current ministers who recognize God’s call of women to ministry. Both the book and DVD are available on Warner Press’s website, www.warnerpress.org.

Other current resources include Randal Huber’s book Called, Equipped and No Place to Go (Warner Press, 2003); a chapter titled “Might the Best Man for Your Church Be a Woman?” in Jerry A. Hickson’s book Are You Sure You’re Right? (Warner Press, 2006); and a section on “Women in Ministry” in Barry Callen’s Following Our Lord (Warner Press, 2008).

“The Church of God movement has been informed by the Pentecostal outpouring of the Holy Spirit reported in Acts 2,” Dr. Callen writes. “The result was that ‘sons and daughters’ will prophesy. The movement also has been informed by the declaration in Galatians 3:28 that ‘there is no longer male nor female; for all of you are in Christ Jesus.’ Following these biblical keynotes, the movement has not only allowed women to function in ministry but has affirmed and encouraged such functioning” (Following Our Lord, 144).