By chogministries
Posted January 30, 2018
In All Church of God, Southeast
She Went to Rehab Five Times, Now She’s Helping Others Recover2018-01-302018-01-30https://www.jesusisthesubject.org/wp-content/uploads/2016/07/ChogLogo-Light.svgChurch of God Ministrieshttps://www.jesusisthesubject.org/wp-content/uploads/2016/07/ChogLogo-Light.svg200px200px

It doesn’t take long to find someone who needs addiction recovery. “Just look in the mirror,” says Rev. Calvin D. Waddy Jr., of Central Community Church of God in west Jackson, Mississippi. “When we hear the word recovery, we automatically think about drugs, alcohol or gambling. But everyone—and I do mean everyone—needs recovery of some sort.”

“It might be recovery from an addiction to food, social media, sex, work, shopping, grief, television, hoarding. No one is exempt. We all have things that overpower us and things that control us that we need help with. That is why Waddy started an addiction ministry at his church last February with the help of Tamritha “Tami” Dean, 49, of Jackson. She understands addiction all too well.

Dean was sexually abused at age 9. She began using drugs and alcohol as a teenager.

“I figured when I got ready to go to college I could quit using with no problem,” she says. “That didn’t work out. I wanted to fit in with my peers, and I went beyond the call of duty.” Dean’s mother sent her to rehab five times.

“Before going back in for the fifth time, I really didn’t even want to use—but I did, anyway,” Dean says. “After that fifth one, I wanted to quit. What I finally realized was that I wasn’t in rehab just for alcohol and drugs. It was the abuse that triggered all of my bad decisions. That was the root of it. I had never come to grips with the abuse, and it controlled me.”

“I was raised in the church. I had tried to make deals with God—‘I’ll do this if you’ll do that.’ But I never kept up my end of it. I figured God wouldn’t listen to me anymore.

“But I learned in the Bible that he would, that he’s bigger than any problem we can have. That’s the only way someone is going to get clean, break their habits and remain clean—through God and Jesus Christ.”

She’s been clean since September 1993. 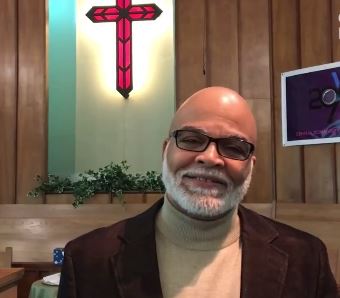 The recovery meetings at Central Community, located at 2305 St. Charles St., begin at 6:30 PM every Tuesday. They are free and open to anyone. They include a meal and last no longer than two hours. “We don’t preach and we don’t try to ‘fix’ everybody,” says Waddy, 53. “We aren’t diagnosing you. You will diagnose yourself. And we don’t judge. But we will help show you how to break whatever cycle of habit you’re in.”

Waddy has wanted to start a recovery program since he became pastor at Central Community eight years ago. “The one thing I wanted different about my recovery program was to have God and his son Jesus Christ at the forefront of it,” he says. “The others say they are ‘spiritually based’ and I understand that they don’t want to offend anyone or exclude anyone. Neither do we. But when someone is battling addiction, they are doing so because they are separated from God. In our program, recovery helps you reconnect with the maker of the universe. And then God will put people in your path to help with your recovery every day.”

Central Community offers an eight-week program called Hurts, Habits and Hangups. It is based on Celebrate Recovery, a national program based in Lake Forest, California, at Saddleback Church. The program was started twenty-six years ago. Celebrate Recovery is described on its website as “a biblical and balanced program that helps us overcome our hurts, hang-ups, and habits. It is based on the actual words of Jesus rather than psychological theory.” Thousands of churches nationwide offer Celebrate Recovery, including Christ United Methodist Church and Southside Baptist Church in Jackson, and The Ridge Church in Clinton.

“People from Christ United have visited us once, and we have visited them,” Waddy says. “We plan to make a connection (with Southside and The Ridge) at some point.”

Waddy and about ten members of Central Community are in training to offer the entire Celebrate Recovery program, which will include children, teens, veterans returning from war, mentally challenged individuals and those who are incarcerated.

Waddy’s plan turned into action in 2014 when he met Dean—now the Celebrate Recovery team leader—at a health conference in Meridian.

“I had known about Celebrate Recovery for nearly twenty years, but it really hit home when Tami mentioned it during her presentation,” Waddy says. “I made a beeline for her as soon as it was over.” Waddy is leading the men’s recovery instructors; Dean leads the women’s. In February 2017, they met with John Baker, the founder of Celebrate Recovery, at a seminar in Austin, Texas.

“We’ve been undergoing their training program ever since,” Waddy says. “It’s a 12-step plan. The men (instructors) are at Step 6. Because of Tami’s experience, the women are at Step 9. We hope to have it completed by October of this year.”

Central Community opened its eight-week program soon after meeting Baker “because we felt equipped to handle that,” Waddy explains. More than a dozen people signed up when the program was launched. More have followed. “We hope this is the beginning of something important in our community,” Waddy says. “I know it’s needed because it’s been on my heart for a long time.”

Article originally published on January 18, 2018, by the Clarion-Ledger. Republished by permission.