By chogministries
Posted January 5, 2015
In All Church of God, Global Strategy, SHAPE
SHAPE Expands to Jamaica2015-01-052015-01-05https://www.jesusisthesubject.org/wp-content/uploads/2016/07/ChogLogo-Light.svgChurch of God Ministrieshttps://www.jesusisthesubject.org/wp-content/uploads/2016/07/ChogLogo-Light.svg200px200px 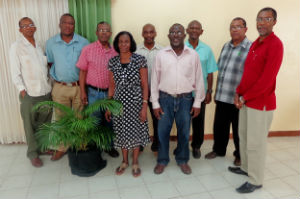 The first SHAPE training outside of the United States and Canada took place November 6–8, 2014, in Kingston, Jamaica, as nine pastors from across the country gathered for three days of intensive training as SHAPE cluster leaders. Gathering at the United Church Center Conference and Retreat Center in Meadowbrook, the group spent long days in relationship building, being introduced to the core values of SHAPE, and experiencing the SHAPE journey.

The interest in SHAPE for Jamaica was initiated by Lenworth Anglin, former executive director of the Church of God in Jamaica. The process is now under the leadership of the new executive director, Adinhair Jones, of Kingston, and the national SHAPE coordinator, Milton Davidson, of Montego Bay.

The original plan called for the establishment of one cluster of pastors in the Kingston area, Region 5 of the Church of God in Jamaica. After the three days of training, enthusiasm was running so high that the final decision was to launch five clusters in four regions of the country. Plans for promotion and recruitment were established and the dates of March 5–6, 2015, was set for the cohort 1 orientation retreat.

Following the conference, Paul was privileged to preach at the Olson Memorial Church of God in Kingston and meet with congregational leaders to discuss congregational life and ministry. On Monday he was asked to speak to over five hundred students for the opening chapel at Ardenne High School. The Ardenne schools, established in 1927 by missionaries George and Nellie Olson, serve over 2,500 students in three programs in Kingston.

Please pray for the work of the Church of God in Jamaica and the launch of SHAPE.

Learn more about SHAPE at www.JesusIsTheSubject.org/SHAPE.