Sex Trafficking: From Awareness to Action

By chogministries
Posted January 13, 2015
In All Church of God
Sex Trafficking: From Awareness to Action2015-01-132015-01-13https://www.jesusisthesubject.org/wp-content/uploads/2016/07/ChogLogo-Light.svgChurch of God Ministrieshttps://www.jesusisthesubject.org/wp-content/uploads/2016/07/ChogLogo-Light.svg200px200px 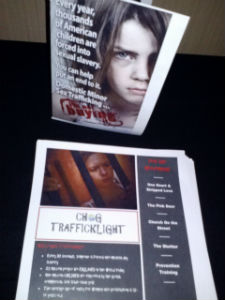 Photo: Awareness materials distributed at the youth convention in Missouri.

The average age at which a child is exploited through prostitution is just thirteen. Take a moment to process that statement. Thirteen years old!

Are you feeling unsettled? That very well could be your child or grandchild, your niece or nephew, your neighbor, or the student in your youth or children’s ministry.

But there is hope. As the hands and feet of Christ, we can tackle this cause head-on in numerous ways. One of these is simply to fully understand the scope of the problem and why our youth are so vulnerable. To take it a step further, we need to create avenues to educate and teach our youth about this horror in order to stop it from ever occurring in the first place.

Last month, the Church of 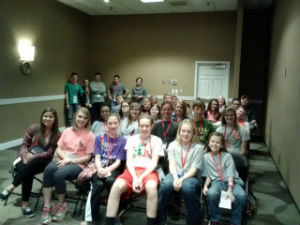 God in Missouri had its annual winter Youth Convention in St. Louis and asked CHOG TraffickLight to hold three workshops about the trafficking of youth. Sixty students and leaders attended the workshops and focused on these three objectives:

1. Exposing the Cons: Teaching youth what sex trafficking is and why it’s a problem.
2. Preventing the Cons: Educating youth on how to avoid being lured into the manipulations of pimps and traffickers.
3. Spurring into Action: Helping youth recognize the red flags and take action individually and as a youth group.

The enthusiasm for this cause that these youth and leaders exhibited at the workshops was encouraging and very inspiring. Let’s pray together that this passion and knowledge will save lives as they process the information and become community and world changers.

The Missouri Youth Convention is just the beginning in our youth education and prevention efforts. If you are interested in having a representative of CHOG TraffickLight come to your state youth convention, we are committed to making that happen. Because our youth are susceptible to being trafficked, they are also potential leaders in putting an end to trafficking through their awareness of the issue, recognizing the signs they could be vulnerable to, and channeling their zeal for social justice into making a difference in the world.

Freedom Sunday—Sunday, February 22, 2015—is just around the corner. This is a day when churches in our movement will take a stand in unity for those living in oppression around our country and around our world. Perhaps the youth at your church will take part on this Sunday in leading sex trafficking awareness efforts as we all take part in this mission of hope.

Get involved in the fight against human trafficking at www.CHOGTraffickLight.org.