By chogministries
Posted October 25, 2022
In All Church of God, CHOG, Great Lakes
Seeing Others: Simple Love, Obedience Open Heart’s Eyes to the Overlooked2022-10-252022-10-25https://www.jesusisthesubject.org/wp-content/uploads/2016/07/ChogLogo-Light.svgChurch of God Ministrieshttps://www.jesusisthesubject.org/wp-content/uploads/2022/10/indianapolis_homeless_cabin_construction2_adj.jpg200px200px

It’s not that complicated, but sometimes we make it so. Slowly but surely the overarching mission, in far too many settings, gets lost in the shuffle. Priorities tend to fall prey to the day-to-day, preoccupation with minutiae conceals the message, and orthodoxy subverts orthopraxy. Of course, what we believe matters greatly, but shouldn’t what we believe dictate what we do? Spiritual surgery to remove the scales from the heart’s eyes is necessary to see what God sees. One seminary student on the front lines of homeless ministry wipes the smudges from the prevalent prescription lenses of popular perspective so the unseen might be seen—truth obscured by conventional thinking and image-bearers of God overlooked underneath the overpass.

James Swartz was born in the east-central Indiana, but grew up in a suburb of Philadelphia. His growing-up years were anything but smooth, and it was at an early age that he was exposed to life on the street. When the shutdown of the steel mill spelled the end of a local industry, it also handed down a sentence of poverty to hundreds of families.

Eye-opening for James Swartz was “watching hundreds of families go into absolute destitution as buildings were boarded up,” he recalls. “I remember going to school one day,” he continues, “and noticing only four or five kids were there. We asked what was going on, and the teacher burst out crying. I distinctly remember that.” 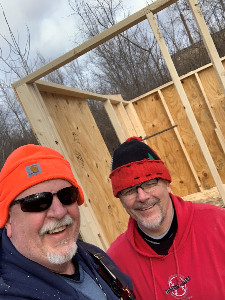 James Swartz (left) works in partnership to get a homeless cabin built.

Fast-forward to one of the most brutal winters east-central Indiana had seen in years. While those whose affluence allowed for avoidance of the nasty weather, heroes of various types braved the deep freeze—first-responders, medical personnel, road crews, store employees, and a host of concerned and compassionate neighbors. Among those concerned and compassionate neighbors were organizers of “warming stations,” including one hosted by Main Street Church of God in Anderson. Also out in the cold was a humble, determined fellow with a mission in mind.

James Swartz was unwilling to let one of “his guys,” as he affectionately calls them, freeze to death. Upon locating those previously unaccounted for, even in the dark of night, James personally transported homeless men to the church. Out of the woods—at least for the worst of it—these men enjoyed warm shelter, a place to sleep, hot meals, board games, and fellowship with volunteers who stayed ’round the clock to bless their neighbors in need. Conversation followed between local volunteers, pastors, and James on the topic of homeless ministry.

James loves his busy yet fruitful life. Living with expectancy, not expectation (a pearl of wisdom he, too, gleaned from Ann Smith as a student of Anderson University School of Theology and Christian Ministry), is allowing him to seize divine moments for the glory of God—and the betterment of others—whether incarcerated, homeless, or home-ful but hopeless without Christ. Aside from his seminary studies, James works for the railroad and serves as pastor-in-residence at Man4Man Ministries in Anderson, Indiana. It’s a unique combination of activities and responsibilities, but the blessings inherent have been unceasing.

“My primary basis for ministry was that I was the kid living under the bridge,” James discloses. I want to be the person that kid needed.”

James’s lifetime of experience, including ups and downs, makes him the character he is today—kind and generous, yet fierce against injustice. 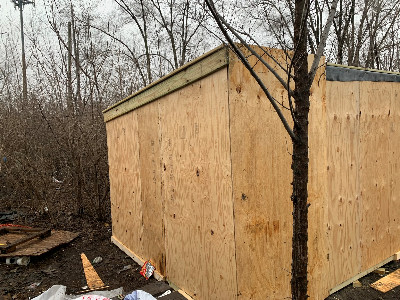 Simple, yet functional cabin construction for the homeless.

“I think God gives us certain skill sets,” James explains. “Most people who do homeless ministry don’t do ‘frontline’ homeless ministry. But I’m 6’5”, 250 lbs. I’ve gone into situations where I almost had to throw hands; like, you’re abusing this woman and I ain’t gonna let that happen! God built me a certain way, and with my military and martial arts background, he’s using me to serve in prisons and to help the homeless. If your ministry is to give money, figure out a way to do that. If God puts something on your heart and you don’t do it, that’s on you.”

Not everybody can do everything, but everyone can do something. James believes in the potency of the body of Christ. Whether it’s exercising the gift of generosity by reserving a hotel room for a night so a homeless man or woman can take a shower, or whether it’s saving lives through craftsmanship by constructing cabins at a homeless encampment on the lower-west side of Indianapolis (like James has done), it all matters in God’s kingdom.

And James is all about the kingdom of God. In fact, he’s serious about avoiding empty expressions of love whenever possible.

Back to the conversation with Ann Smith for a moment. James says that living with pre-determined expectations about homeless ministry wouldn’t have allowed him to experience the depth and breadth of the experience. Ten bucks given to the roadside panhandler is great, but if that’s the only expectation, results are limited. But going out to the theater to see the latest Star Wars film with a Star Wars fan who almost died one cold winter in homelessness, watching him with pure joy, revel in being treated with divine-image-bearing humanity—that kind of thing only happens living with expectancy of a limitless God. 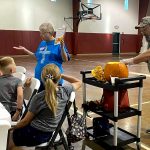 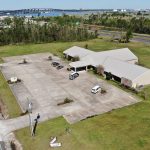